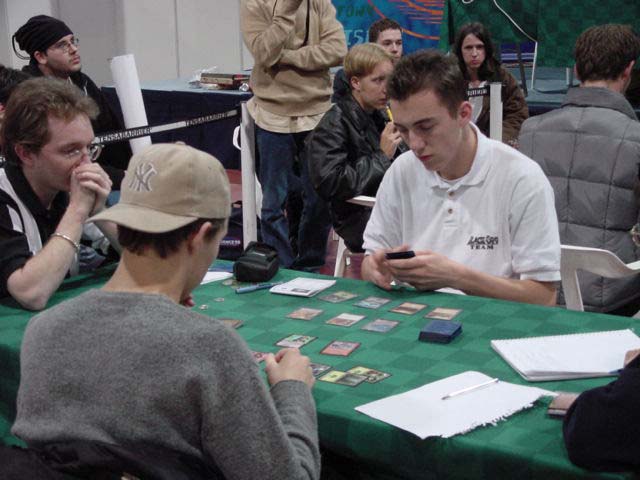 Two of Europe's finest met in this semi-final. Despite the late hour and visible tiredness they still took the time to crack a few jokes, involving the Head Judge Cyril "Barry White" Grillon and whoever happened to be nearby.

Noah's deck is supposed to be the fast one but Ruel came out of the blocks with a Galina's Knight and a Spirit Weaver. Noah tried to set up for his big creatures with an Harrow and a Quirion Explorer. Ruel played an Angelic Shield to allow his creatures to swing with reckless abandon. Noah finally took advantage of the sea of mana he had amassed and play a Kavu duo: Mire and Hooded. Olivier responded with an even bigger Kavu: Serpentine.

Meanwhile the protection for red allowed the Galina's Knight to pick poking Boeken. Two Kavus crashed on Noah's attack phase: his Mire Kavu was blocked by Serpentine and when Noah played a Aggressive Urge on his attacker Ruel chose to sacrifice the Shield to save his green monster.

Noah then played a Thornscape Battlemage with a red kicker to put an end to the knight. Olivier then plays another monster: Steel Leaf Paladin. To counter this Noah dropped two small creatures, a Viashino Grappler and a Kavu Scout, and teasingly started chanting "Cloak, Cloak" in reference to the Traveler's Cloak Ruel drafted.

The Frenchman wanted to show a different trick instead: he used an Harrow to get an extra land type and then cast an Allied Strategies after replaying his Serpentine Kavu. Noah added another Kavu, a Slimy one this time but he could not get past the huge wall of behemoths Ruel had summoned. With his hand bursting Ruel played a Mirrorwood Treefolk.

The huge amount of creatures on the table could not slow down Ruel who kept swinging with the Treefolk, whose redirecting ability convinced Noah not to block, while the hordes watched. Olivier kept casting Sunscape Battlemage and Sawtooth Loon to draw extra card to such a point that he had to carefully count his library to make sure he wouldn't deck himself.

Despite a blocking mistake with the Treefolk, Ruel forgot about the Pouncing Kavu's first strike, there was nothing anyone could do to stop Ruel's Sawtooth from flying in for the kill.

This game didn't start well for Boeken who seemed to be locked at two lands while Olivier played three different lands and then used an Harrow to further Strengthen his mana base and played a Spirit Weaver. The Weaver got but Ruel kept dropping blockers that forced the Dutch to stop to find answers.

He had to use a Darigaaz's Charm to make sure an Artic Merfolk, with a little help from an Explosive Growth, could not kill his lone Kavu Scout. That same creature died in the next attack phase but took down a Sparring Golem. Olivier then entered his "card drawing" mode with a Sunscape Battlemage and played a Crusading Knight (3/3) that traded with a Kavu Climber.

For every creature that Noah played Olivier had a good blocker in his, never empty, hand. He did however managed to sneak a few more points but Olivier would not let him have any hopes: He played an Armadillo Cloak on his second Sunscape Battlemage and started getting his life total back into shape. On the same turn he also played the dreaded Mirrorwood Treefolk.

This gave Noah Boeken to big problems to solve. He spent a few minutes considering all his options and used a Soul Burn to get rid of the Treefolk. A couple of turns later he thought he had the answer to the Cloak: he used a Agonizing Demise on the Sunscape but Ruel had a Repulse to save his creature and avoid the damage.

Noah then tried to swarm Olivier dropping all the creatures he could draw and swinging with added fervor before the Frenchman could rebuild his defensive task force. It was too little to stop Ruel. He used his Serpentine Kavu to swing when he felt confident in the consistency of his blockers.

Boeken could only watch in silence as the Sawtooth Loon again finished what the Serpentine Kavu had started.