Mike Long and his Northern Lights #5 crew are used to the spotlight. Long has played in an uncountable number of high-pressure matches. Justin Schneider was a junior PT champion years ago, and hasn't lost his edge since. Only Mike Krzywicki may not be a familiar face, but with the other two flanking him, he's been a pillar all weekend. 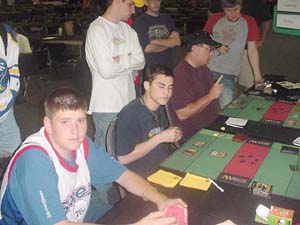 Across from them in the semifinals are three guys from Florida that go by "Prodigy": Charles Gindy, Jamie Duguid, and Manny Orellana. Did they expect to be here? Let's just say they were rearranging their flight plans between rounds today.

The veteran Lights were friendly to the upstarts to start the match, joking about age and the love of basketball. But when the matches began, the lightheartedness was put away, and all the game faces were on.

Schneider and Duguid traded morphs early, then Schneider grimaced when Duguid played out Wirewood Channeler on turn 4. Schneider had a Taunting Elf out, and added a Timberwatch, trying to build some kind of green killing machine. But as feared, Duguid ramped out an amplified Feral Throwback and things started going downhill for Schneider.

Krzywicki establish good board position with his red-white deck against Gindy's blue-white, and his Tephraderm was causing real problems for Gindy's smaller creatures. Gindy made a big play by using Peer Pressure to steal a Swooping Talon.

Long fell to Orellana's Sparksmith and Skinthinner and was quickly shuffling up for game 2.

Schneider also fell, as Duguid's Channeler allowed him to get out Havoc Demon in addition to other huge monsters. "Your deck is so bad without that guy," Schneider said, nodding towards the Channeler, "That's your only way to win." Prodigy was up two games early.

The B-seat game was getting more and more complicated; there were 12 creatures in play, many of which were face down, and neither player looked to be in a good position to attack.

Orellana mulliganed to start game 2, but got that card back when Long attacked with Festering Goblin into a face-down Zombie Cutthroat. The Cutthroat bashed Long once, then Orellana Solar Blasted Long's Bladewing's Thrall. The Cutthroat bashed again. Long managed to trade his Riptide Shapeshifter for a Vengeful Dead, netting a Keeneye Aven in the process, and then started climbing back in the game.

Carrion Feeder and Raven Guild Initiate gave Long some tricks to try and reclaim a little tempo that he lost when the Cutthroat flipped up. A Crypt Sliver looked to buy even more time for Long. Orellana was getting upset that the game was drawing out this long. "It's hard, I know, you don't have a Sparksmith in play. Awwww...," teased Long.

At the other end of the table, Schneider took Game 2 behind Elven Riders and Wellwisher. Duguid had some early plays, but Schneider's Cabal Interrogator took away much of his late game, and the unblockable 3/3 Elf took care of the rest.

Long was climbing back in after a big Reaping the Graves, but Orellana finally got the eighth land for his Flamewave Invoker. Long looked distressed, but the old fellow always has a trick up his sleeve.

Instead of saving the mana for his Invoker, Orellana decided to go for the big play and cast Form of the Dragon. He showed Long the card and went to tap his lands. Mike interrupted. "I might have something for that," he said confidently, "Are you really casting it?"

Orellana looked confused for a moment and decided he'd better just try and win with the Invoker. "No, I'm not," he said.

"Sucker," said Long as he tapped all of Orellana's creatures with Choking Tethers during his end step. It was all a bluff; Long had no way to deal with the Form and would have lost to it outright. Instead, he stole a win with pure mind games.

Had Orellana realized Long's Carrion Feeder was incapable of blocking, he would have been able to win the game much earlier. Instead, he was left muttering to himself as he shuffled up for game 3.

"I'm the worst," said the Floridian to he friends in the crowd.
"Yep, it gets pretty good up here at the pro level," Long chided. "You ARE a pro now," he added, hinting at the handful of PT points each player gets for making the top 4. 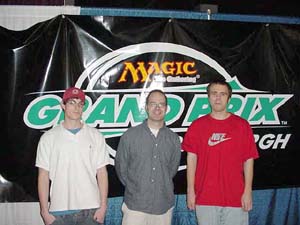 During all this ruckus, Krzywicki managed to steal Game 1 from Gindy when Gindy blinked first on a board full of creatures. It really looked like Gindy had the upper hand the whole way, including a face-down Chromeshell Crab. But he made a bad attack that Krzywicki had an answer to, allowing Krzywicki to strike back for the kill.

Schneider fell in Game 3 when Duguid ripped Aphetto Dredging off the top and used it to get back his Gempalm Strider. With the number of Elves he had in play, Schneider had no good blocks and took an exactly lethal 14 damage in an all-out assault.

As the crowd was abuzz with the mind trick Long had pulled, Gindy quietly took Game 2 from Krzywicki. The last moments of the round were bound to be tense ones.

Long had it working in Game 3. The ground was all gummed up, and Long had a Covert Operative and a Mistform Dreamer in play delivering the beats. Orellana's position wasn't as bad as he thought, but once again he thought Long's twoCarrion Feeders were capable of blocking.

Orellana kept looking for a way out, and never saw that he could have won the game with the Solar Blast he drew. As the people in the crowd tensed watching Orellana botch another winnable game, he was let off the hook by Gindy, who took Game 3 from Krzywicki is the blink of an eye.

That's why it's teams, folks; one player can drop the ball, but as long as the other two pick him up, they get the W.