Semifinals: Object of Affection vs. Ace Ten Off 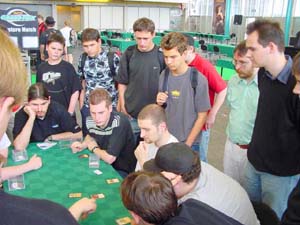 The dust has settled. 198 teams are now 4 and those 4 teams are packed with experience. Ace Ten Off count Eric Froehlich, the legend Jon Finkel and twice PT runner-up Kamiel Cornelissen as their members. Ranged against them is the cream of Scandinavia. The members of Object of Affection – Anton Jonsson, Jens Thoren and Tomi Walamies – have many Pro Tour Top 8s between them.

The bomb-laden seat C matchup looked like a treat for the Timmies out there so I picked that one to cover. Froehlich was running green-red, Jonsson blue-red.

An early Stonewood Invoker from Froehlich ran into a Cutthroat. An Erratic Explosion got that nuisance out of the way. Jonsson held off Froehlich's morph with a Raven Guild Initiate and served through the skies with a Dreamer.

Then the bombs started dropping: Centaur Glade for Froehlich, a beating in this matchup, which was then dwarfed by Silvos. Not to be outdone Jonsson followed Sparksmith with Imperial Hellkite. Inner Timmy's rejoice.

The savagery continued. Froehlich tapped two mountains and then sacked them to flip over a Skirk Volcanist to kill the 'Smith and deal 2 damage. The mana was then used to send a Crested Craghorn screaming into the wounded Hellkite. Jonsson was smashed to 1 life.

He tried to stay alive with Choking Tethers, but Froehlich had a shock anyway.

Finkel and Cornelissen both took their first games to leave Ace Ten Off one up across the board.

No early Sparksmith for the Swede in game 2. It was Froehlich ho got the first beats in with a goblin of his own, the mediocre Drill Sergeant. The game went into race mode as Jonsson made some morphs and then flipping them over into Seaswifts.

Froehlich had no aerial defense for the Seaswifts though and it looked like Jonsson might just take the game as Froehlich was only on three life. But no, the American flipped over Skirk Volcanist and the Seaswifts seemed destined to head straight to the 'yard. Jonsson thought about it for while and then flipped Master of the Veil over to save one of the Seaswifts. This could only knock Froehlich to 1 life. Jonsson summoned a Sparksmith and hoped to survive a turn.

No chance of that as Forgotten Ancient shipped all it's counters to Silvos making it a 14/11 trampling monstrosity and then pointed a Torrent of Flame at Jonsson's head.

Ace Ten Off 1-0 Object of Affection 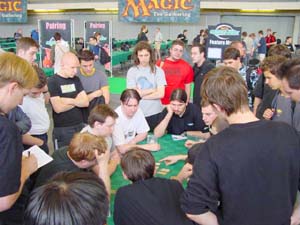 In Seat B Finkel was facing down a Nantuko Husk, Noxious Ghoul and double Redeemer. A Windborn Muse was slowing Thoren down but eventually it had to chump the husk and it was time to a decider.

In game 3 Kai popped up to start beats for Finkel, only for the Voidmage Prodigy to trade with Cloudreach Cavalry. Finkel followed with a morph and Keeneye Aven. Thoren held the morph back with a Silver Knight and then dropped a monster triple-amplified Daru Stinger.

Finkel got in 2 points of flying damage and build up his board with a White Knight and morph.

Thoren threw him back as he summoned a Dragonstalker and then a Soulgazer.

Finkel tried to think a way out of the situation. The Stinger was a headache and Thoren had offense in the form of 2 3/3 fliers. He poked a Zealous Inquisitor into the red zone. Thoren threw a Silver Knight in the way, which died as the Inquisitor bounced the damage elsewhere.

Undaunted Thoren swung in for 6. Finkel was waiting to ambush. He flipped over an Aven Liberator and double-blocked the Soulgazer.

Then it all became academic as Kamiel Cornelissen won the match against Walamies and gave Ace Ten Off an unassailable 2-0 lead.

Final Result: Ace Ten Off beat Object of Affection and advance to the final.