Both of these players were already qualified for the World Championship before the event started, so they have more reason than anyone to want to make the World's team. To do so they must win now or in the 3rd/4th play off. Of course, there is also the small matter of 3500 euros and the National Championship at stake. 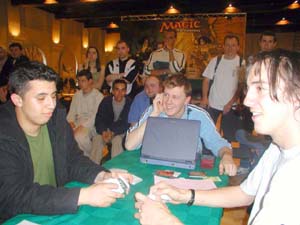 Olivier played a second turn Compulsion, and Farid had yet another good draw with the Opposition deck, Speculating for Cabal Therapy, Deep Analysis, and Roar of the Wurm with a Bird of Paradise and a Llanowar Elf in play. The Cabal Therapy hit two Counterspells and left Olivier with just two Miraris in hand. Both players were in high spirits despite Ruel being in a horrible position in a horrible matchup already.

With nothing in hand of any relevance, Olivier could only watch as Farid played Phantom Centaur and Opposition, ending the game rather rapidly.

Amiel Tenenbaum was obviously an Olivier Ruel supporter as he came up during sideboarding and asked for his Birds of Paradise back, but Farid decided to keep them. Farid jokes about how bad the Static Orb in his sideboard was, as he'd only brought it in once in the whole event against Florent's Slide deck, and it was absolutely useless there as well.

Farid played Cabal Therapy on turn one, taking Compulsion. There was a debate on turn three when Meraghni made Call of the Herd and then Olivier sacrificed his Krosan Verge. Farid tried to flashback his Cabal Therapy, but Olivier claimed that he had used the Verge in his opponent's end step. The judge ruled that Farid hadn't said 'go', and so he was allowed to steal Exalted Angel as well.

Olivier used Cunning Wish to fetch Opportunity. Meraghni had another Cabal Therapy and left Olivier holding only lands and Wrath of God. A third Therapy left him with absolutely nothing. Farid didn't have a creature in play, but had drawn lots of cards from Deep Analysis. Olivier drew yet another land Farid cast Quiet Speculation for three Call of the Herds.

Ruel drew another land and took six from the two 3/3s, then an Exalted Angel. This didn't help at all as Farid had Opposition so he could tap it with a Birds of Paradise – Farid Meraghni advances to the final.