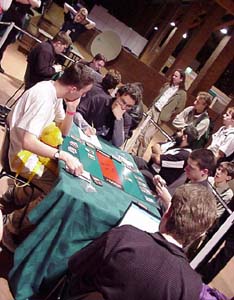 Wiegersma kept a hand with Islands only on strength of Obsessive Search, but it was not until turn four that he drew a Forest. Ruel got a turn two Minotaur Explorer into play and got to attack with it once, before Wiegersma cast a Dreamwinder. Ruel, who was stuck on two lands while holding some very impressive cards, cast Hypochondria, which allowed his Minotaur Explorer to sneak damage past the Dreamwinder.

Wiegersma cast a Dilligent Farmhand by the time Ruel found a fourth land, but both of his creatures fell victim to Violent Eruption, an attack bringing Wiegersma down to nine life points. At this point the Dutch player began to stabilize – he cast Waste Away on the Explorer, putting a Basking Rootwalla into play, and cast Afflict on the newly summoned Halberdier.

Ruel had no creatures other than Aven Cloudchaster – but casting it would mean destroying his own Hypochondria. It was a difficult choice, but Ruel made the gambit, putting a 2/2 flyer into play. Wiegersma matched with a Dreamwinder and enchanted it with Ghostly Wings.

Just as Wiegersma was about to recover Ruel made his move. He waited until he had enough cards in hand – then discarded his entire hand to Rites of Initiation. He gained Threshold, which means that his Mystic Visionary gained flying, and Wiegersma could block only one of his creatures.

Once again, Ruel opened with his classic turn 2 Minotaur Explorer play. This time around he did not mana stall and it was joined by Barbarian Lunatic. Wiegersma's opening plays weren't bad either – he cast Skywing Aven and then traded a Dreamwinder with the Explorer. Ruel's Petravark stole Wiegersma's Island, but he had more. An Afflict took out Barbarian Lunatic while Ruel was tapped out, stabilizing the table.

Ruel cast Kirtar's Wrath to clear the board, but Wiegersma was able to bounce back his Skywing Aven. Wiegersma was not lacking creatures, which resulted in Ruel's Halberdier facing off against four guys just a couple of turns later.

Wiegersma was ahead in the damage race, but Ruel was not out of the game. He summoned Pianna and was racing. Temporal Insanity bought him another turn and a well-played bluff got Wiegersma to trade his Dreamwinder with Pianna in combat. Skywing Aven attacked Ruel, who was down to two life points, and he was forced to block with Skywing Aven. He failed to draw another answer, second game going to Wiegersma.

Ruel chose to play second. While Wiegersma kept a solid hand, Ruel's hand featured six lands and a Temporal Insanity. He chose to keep his hand, which is certainly an unorthodox choice – but luck is certainly a part of the game, and he managed to draw his Minotaur Explorer in time to cast it on turn 3.

Wiegersma cast a Seton's Scout and a Dreamwinder, unable to attack past the Explorer until he drew and cast Ghostly Wings. Scount was now coming in for three. At five mana, Ruel cast Second Thoughts, forcing Wiegersma to pick the Scout up to his hand, but more importantly dealing with the Wings.

The next batch of turns resembled the cold war – both sides kept adding to their arsenals with nothing much actually happening. Eventually Wiegersma used Waste Away to take out the Explorer and finally attacked with a Dreamwinder – but that only let Ruel cast his Gallantry and kill the largest creature in play.

Wiegersma's board position was looking better and better. He achieved Threshold, improving the value of his Krosan Avenger and Seton's Scout, and summoned a Springing Tiger. Ruel forced a showdown at this point, attacking with all of his creatures. Although he lost two of them, he was also able to decimate Wiegersma's team with help from Volcanic Eruption and Pardic Arsonist. However, just as Ruel spent his removal, Wiegersma played Nut Collector.

Wiegersma attacked with a Cephalid Sage, and Ruel used Temporary Insanity to steal the Collector and chump-block with it. Wiegersma kept posing threats – next up were Balshan Griffin and Skywing Aven. Meanwhile, Ruel was sitting on a hand of six lands. There was hope for Ruel and his lands as he drew Hypochondria, but Wiegersma was holding an answer in form of Liquify. Two more attacks with the flyers, and it was all over.