By reaching the Top 8, Alexander Hayne reached Platinum level in the Pro Players Club, and ensured that he would be the captain of the Canadian World Magic Cup Team. By winning his quarterfinals match, the Canadian Alexander Hayne became the 2011-2012 Rookie of the Year. What a weekend!

Even though this is Hayne's first year playing professional Magic, he still has noticeably more experience on the Pro Tour than his semifinal opponent: Team SCGBlue member Joshua Cho.

Cho is playing in his first Pro Tour this weekend, and was "hoping" to Top 25 this event so he could earn an invitation to Pro Tour Return to Ravnica later this year. Well, Cho has accomplished his goal and then some as he now finds himself in the semifinals. 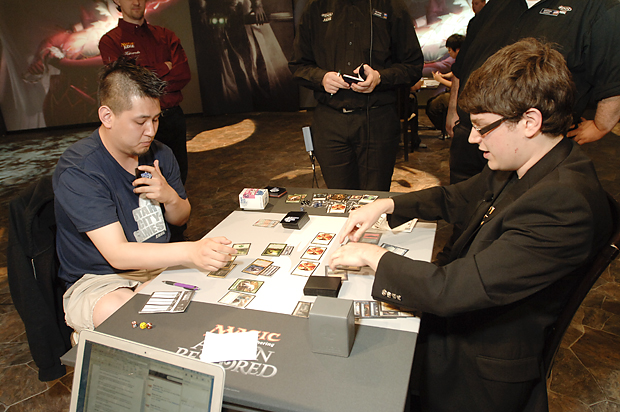 Joshua Cho and Alexander Hayne clash, both hoping to improve on their already incredible weekends.

Cho opened with an Avacyn's Pilgrim, but a Feeling of Dread and two copies of Devastation Tide kept Cho from assembling any sort of meaningful offense early. After seeing his threats get bounced again and again, Cho was finally able to keep a Borderland Ranger and an Avacyn's Pilgrim on the board when Hayne spent a turn casting a Tamiyo, the Moon Sage.

Hayne's Planeswalker met an early demise thanks to Wolfir Silverheart, while a replacement Tamiyo, the Moon Sage drew Hayne two cards. However, that Planeswalker wouldn't end up sticking around long either, as a Bonfire of the Damned killed it, and a hit from Wolfir Silverheart plus Borderland Ranger left Hayne at 5.

Hayne used a Devastation Tide to once again reset the board, and countered an end of turn Restoration Angel with a Dissipate to further drag out the game. Borderland Ranger, and Huntmaster of the Fells were whisked away by Terminus, but Cho had replacements for both of them.

At this point Hayne, who was facing down lethal damage, knew that he needed a lot to go right for him. Things began to fall into place for him when an end of turn Thought Scour found an Entreat the Angels which Hayne miracled to create four 4/4 angels, but when his next draw step failed to yield anything of note, he was right back to square one.

After attacking for 16, Hayne had to Terminus away the board before playing the final card in his hand. A land. 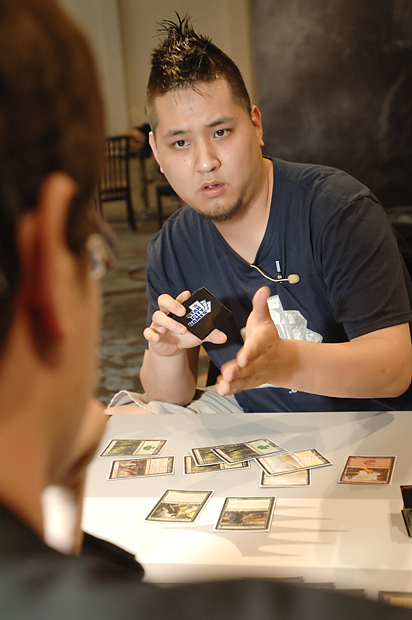 Cho battles through a number of board resets with plenty of threats waiting in reserve.

Avacyn's Pilgrim plus Wolfir Silverheart allowed Cho to once again represent lethal damage, and when the top of Hayne's deck again failed him, they were off to Game 2.

Cho had to mulligan twice before he kept a five-card hand that contained only a single land. Cho never managed to draw out of that rut, and a few turns were spent discarding. An Entreat the Angels later, and the match was even at one game apiece.

Cho got off to a somewhat slow start in the third game, but he still managed to convince Hayne to Devastation Tide away a Huntmaster of the Fells. Once Cho had lured a Devastation Tide out of Hayne's hand, he used the opportunity to resolve a potentially devastating Nevermore naming Entreat the Angels.

But even though Hayne wasn't able to play his deck's primary win condition, he still had Tamiyo, the Moon Sage and a Midnight Haunting to help him stall the game out for a few turns.

When Hayne finally miracled a Temporal Mastery, he knew that he was ready to go on the offensive. A Devastation Tide cleared away Cho's many creatures and, more importantly, Nevermore.

On his Temporal Mastery turn, Hayne cast an Entreat the Angels for three, and suddenly it was Cho who was in trouble. 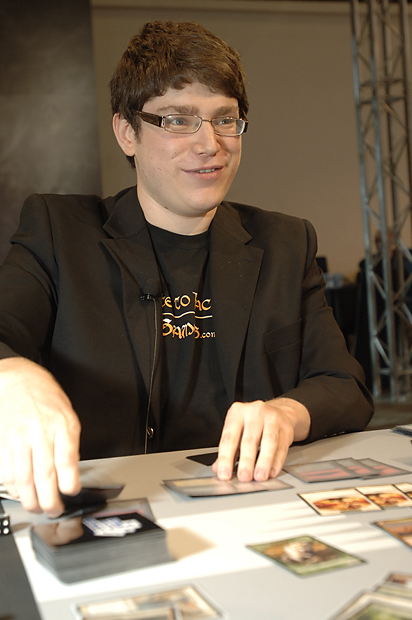 Hayne mounts on offense with an angelic army.

Sigarda, Host of Herons slowed down Hayne's offense for a moment, but a Snapcaster Mage flashing back Midnight Haunting gave Hayne all the pieces that he needed to mount a big attack. Feeling of Dread tapped down some of Cho's would-be blockers, Hayne drew five cards with his Tamiyo, and then he a second Entreat the Angels, setting himself up to go for the kill on his very next turn...

However, Hayne would never get that turn as Zealous Conscripts plus Restoration Angel allowed Cho to take two of Hayne's angels and swing in for lethal damage.

Cho mulliganed down to six, and shook his head exclaiming that he was "off to a suspicious start" before keeping his six card hand. Cho's first turn Avacyn's Pilgrim fell to a miracled Terminus, and Cho then revealed why his hand was so "suspicious" as he passed his second turn without playing a land. 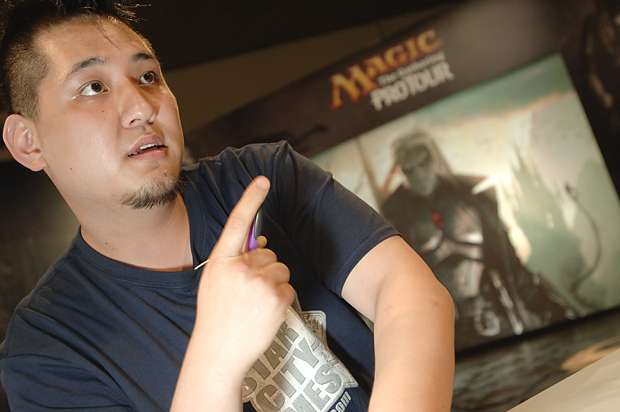 Miracles: they tend to happen to the player with more miracle cards in their deck.

Midnight Haunting gave Hayne a clock, while Cho continued to hope for lands. By the time that Cho finally found his second land, Hayne had a Dissipate to counter Scorned Villager, and a Snapcaster Mage to flashback his Midnight Haunting and further speed up his clock.

When Hayne miracled an Entreat the Angels for two, Cho asked the Canadian to "Show me the Dissipate," knowing that there was nothing he could do if his opponent had the counterspell in his hand. Hayne obliged, and the players were off to a deciding fifth game.

Hayne had to mulligan down to five cards in the deciding game, but Cho once again found himself suffering through mana woes. By the time Cho finally got the fourth land that he needed to cast Huntmaster of the Fells, Hayne had a couple of copies of Devastation Tides to buy time until he could cast a threat of his own.

After watching his board get bounced on consecutive turns, Cho realized that he needed to kill Hayne quickly. With this in mind, he ran out a Borderland Ranger and a Zealous Conscripts (which he used to give his own Borderland Ranger haste) in hopes of punching through some damage. But Hayne used a Feeling of Dread to tap them down and preserve his own life total.

A Snapcaster Mage then allowed Hayne to flash back an Entreat the Angels for two, threatening to end the game in a hurry.

However, Cho had exactly the tools that he needed to turn the clock back in his favor: a Zealous Conscripts and a Restoration Angel. After borrowing both of his opponent's angels, Cho was able to attack for 16, putting Hayne down to a mere 4 life.

It seemed as though Cho was about to advance to the finals...

However, Hayne had other plans. A Feeling of Dread tapped down Cho's only blocker and allowed Hayne to attack for ten. Temporal Mastery allowed him to attack for another ten, knocking Cho (who had gained life thanks to Huntmaster of the Fells) down to 4, and a second Temporal Mastery allowed Hayne to finish his onslaught and move on to the finals. 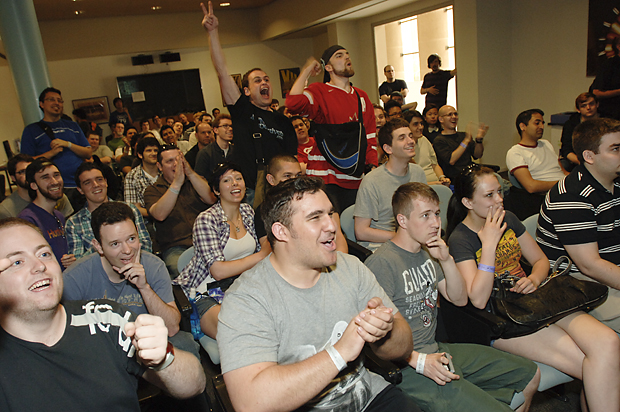 The crowd roars with excitement to an epic finish of a thrilling match.

Alexander Hayne wins 3-2 and advances to the finals!