The all-American Semifinals had Michael Jacob pitted against Paul Rietzl. It was the second Pro Tour Top 8 for Rietzl and the first for former U.S. National Champ Jacob.

Rietzl got off to a blisteringly fast start. He summoned Steppe Lynx on turn one, cracked Arid Mesa on turn two to put Jacob at 16, cast Figure of Destiny, and made that a 2/2. Jacob shot Steppe Lynx with Punishing Fire. Rietzl made his Figure 4/4 and attacked. Jacob cast Preordain and Terminate; gone was the Figure, but Rietzl had a new one as well as a Student of Warfare. Jacob made Coalition Relic and hit the second Figure with Lightning Bolt. 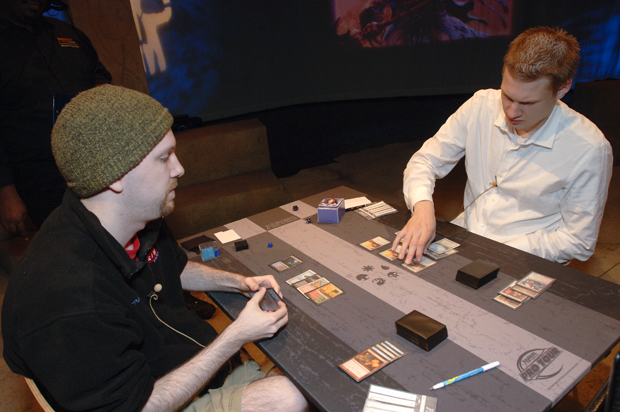 Michael Jacob and Paul Rietzl's fight is fast and/or furious..

Knight of the White Orchid was up next for Rietzl, who then levelled Student of Warfare twice and attacked for 3 damage to put Jacob at 9. Rietzl passed his turn with one card left in hand and one Plains untapped. He sat back in his chair and put the one card face-down on the table.

Jacob charged his Coalition Relic at end of turn, which allowed him to cast the infamous turn-five Cruel Ultimatum. Rietzl smiled and slowly turned over the face-down card ... Mana Tithe!

Rietzl started with Burrenton Forge-Tender on turn one, then got his Student of WarfareMana Leaked, but resolved a Figure of Destiny. Punishing Fire tried to remove the Figure, but the Forge-Tender heroically sacrificed itself to prevent that.

On his next turn, Rietzl cast Knight of the White Orchid before playing a land, and followed it up with Honor of the Pure. Jacob used Preordain to find Grove of the Burnwillows and proceeded to shoot the same Figure of Destiny with the same Punishing Fire again, this time to death. 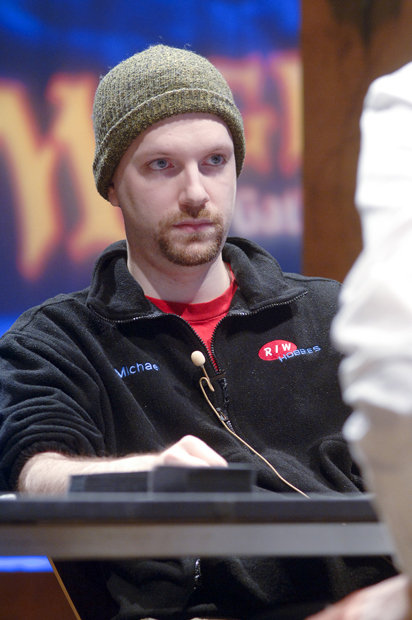 Rietzl just cast a second Honor of the Pure and attacked with his now 4/4 Knight to put Jacob at 12. Jacob drew a card and passed the turn right back to Rietzl who made Ranger of Eos, searching up one Student and one Figure.

Jacob had Consume the Meek in hand, but no good answer to a 5/4 Ranger. He tried to kill it with the combined powers of Punishing Fire and his Creeping Tar Pit, but Brave the Elements thwarted that plan. Meanwhile the Knight of the White Orchid had taken Jacob down to just 4 life. Rietzl kept up the pressure with Spectral Procession so that only Damnation could save Jacob. He went looking with Preordain. . . and a second Preordain. . . and picked up his cards for the third game.

Jacob played first but—not unexpectedly—Rietzl had the first actual play, once again starting out on Burrenton Forge-Tender. He made Honor of the Pure on his second turn, while Jacob only played a second Creeping Tar Pit.

Rietzl summoned a Knight of the White Orchid and Student of Warfare on his third turn; Jacob shot the Knight with Lightning Bolt. Jacob tried Volcanic Fallout but Burrenton Forge-Tender saved the Student. 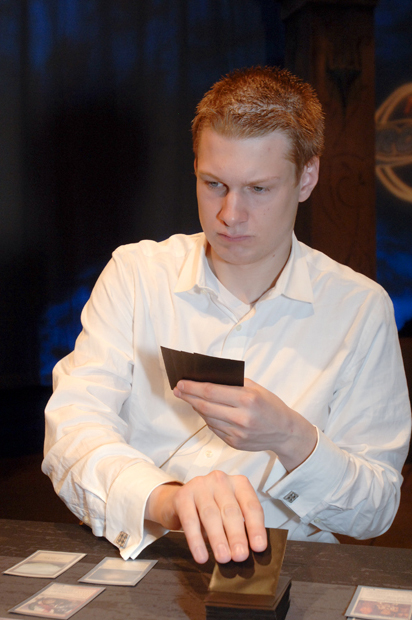 You can never have too many cards.

A second Honor of the Pure made it onto the battlefield and the Student itself made it to level two. Rietzl also summoned Steppe Lynx, just in case. Unless, of course, that case was Damnation. The black sorcery killed everything, but Rietzl came back with Spectral Procession and a third Honor of the Pure, to which Jacob responded with Lightning Bolt targeting one of the tokens.

"Oh, that was bad," Rietzl scolded himself. If he had cast the spells the other way round, 3 damage would not have been enough to kill any of his tokens. It didn't matter, though, as the 4/4 Spirits quickly took the game and match.

Paul Rietzl bests Michael Jacob 3-0 and advances to the Finals of Pro Tour–Amsterdam 2010!