This pair of Magic titans last played each other on a Sunday at the Chicago stop of last year's Pro Tour. Kai smashed Jensen in four games and went on to take yet another title. Is it fair to call William Jensen the best player to never win a Pro Tour? Since Dirk and Bob Maher both taken home giant checks there isn't even a need to engage in debate. 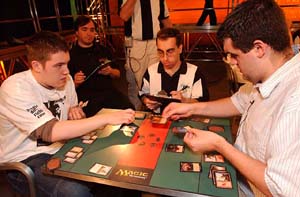 Jensen was hoping to shed that title and build on a terrific year that saw him make Top 8's at both Venice and Chicago. He had a formidable barrier standing in his way today though. To make matters more complicated Phoenix Foundation has been preparing relentlessly in Atlanta for the past several weeks with the same training regimen they used last year.

The Brockerfellers on the other hand had barley touched a Magic card since Nationals and their first team Rochester draft in this format was round seven yesterday. The draft went pretty well for both teams and each team put themselves at a slight advantage. With the drafting out of the way it was time to get down to playing with their cards. You couldn't ask for a better pairing.

Kai could not keep his opening seven and stuck with his next six cards. Huey liked his hand and they were off. Kai got things started with a Wall of Hope and a morph which Huey matched with his own.

Kai missed land number four and added another mystery man to the board. Huey sent his guy into the red zone and drew the first blood of the match and played a Death-Head's Buzzard.

Kai was still looking for his fourth land when he cast Lingering Death on Huey's morph. Kai chose not to block with his wall on the next turn and prevented one point of damage when he flipped up a Daru Healer. Huey played an Embalmed Brawler showing Festering Goblin and played that as well. When he ended his turn he revealed the enchanted morph to be a Putrid Raptor and put it in the bin. Kai was at 15 and Huey was at 18.

Kai found his fourth land and played a Daru Spiritualist. Jensen got in for one with the buzzard and continued to develop his mana. Kai swung his morph into the Brawler and Jensen lost a life when it blocked. Kai flipped up a Daru Sanctifier and it survived combat. The buzzard continued to peck away for a point a turn. Kai fell to 13 and Huey was at a sturdy 17.

The Sanctifier got in for another point and Kai played another one face down. Huey got in for his traditional point and tapped out to play a Goblin Dynamo. Kai played his sixth land and made an Anurid Murkdiver hoping Jensen would use his goblin fireball on the zombie beast. Jensen had other plans and after he got in for his point cast Infest. When the dust settled everything was dead except for the Goblin Dynamo. Huey cast a Vengeful Dead and sent the turn back with a grin. "I had a good turn there."

Kai had an unamplified Aven Warhawk but it was dispatched with a Skirk Marauder and Jensen rumbled across for the win.

Kai opened the game with a Daru Spiritualist and followed with a morph. Huey played his own morph and Kai attempted to kill it on his next turn with an unmorphed Exterminator but it turned out to be Putrid Raptor which Huey turned face up with the help of a discarded Brawler. Kai was able to get in for four points of damage since Jensen was not about to block with his momentarily 1/1 zombie. The Raptor crashed acroos the red zone for four points of damage on the next turn and he played a Death-Head's Buzzard. 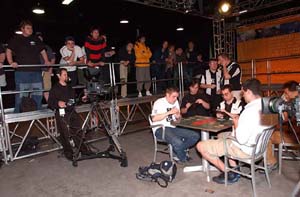 Kai cast Lingering Death on the Raptor but he had to absorb another four points from it and he fell to 12. He evened up the life race and tried to stabilize with an Aven Warhawk amplified once with Wingbeat Warrior. Jensen had the Infest once again and wiped out the board. He drew a collective intake of breath from the spectators who were unused to seeing Kai on the ropes on a Sunday morning. He played a morph and sent it back to the German.

Kai played his sixth land and dropped a face-up Wingbeat warrior and a Zealous Inquisitor. Huey though for a while and took a deep breath while he pondered his options. There were no blocks from Kai as the morph got in for two. He played another morph and promptly shot the flier with his Skirk Marauder.

Kai had no attack and kept his Inquisitor back on defense. Jensen drew another gasp form the crowd when he flipped up his protection from clerics Fallen Cleric and swung in for four unmolested. Kai played a face down Daru Healer to block the Cleric and played his seventh land. He was out of cards.

Twisted Abomination came down on Huey's side and things were looking grim for Kai. He played an eighth land and was able to only take two from the Skirk Marauder while trading his morph for the Cleric and absorbing the damage from the zombie with his Inquisitor. He shot the goblin but he fell to two before it died. Huey played an Embalmed Brawler and sent the turn back to Kai who needed to draw a creature or something to stay alive. He didn't.

William Jensen, The Brockafellars, B Seat