Marco Blume is often unfairly characterized as the third wheel on Phoenix Foundation. It's hard to avoid when your best accomplishment comes yearly at the Team Pro Tour. He finally got a title of his own at Grand Prix - Atlanta earlier this month, and if he doesn't give up the game like he's threatening, he could be busting singles Pro Tour Top 8's before you know it. This round, he's up against old schooler Brock Parker, who's in the same trap. The only time he's tasted big success without compadres Linde and Jensen was when he won Grand Prix - Turin with Peter Szigeti and Dan Clegg. They're throwing down in the blue-green mirror, a few troubling creatures in both decks. 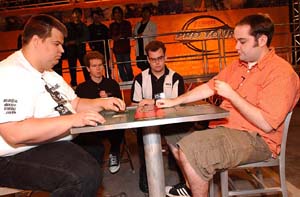 Blume mulled, but kept his second hand, hoping for a land draw. It came, and he led with Wirewood Elf and then used the speed boost to cycle away Wirewood Guardian while playing a Stonewood Invoker. Parker spent his first two turns cycling Tranquil Thicket and Dragon Wings, then got on the board with a morph. He answered the Invoker with a cycled Guardian and played an Elvish Warrior.

Blume untapped and played a very threatening Wirewood Channeler. All Parker could muster was a Leery Fogbeast. Blume made him pay.

The Channeler tapped for blue and down came Pemmin's Aura. Infinite mana went quite nicely with Blume's Stonewood Invoker. The Fogbeast chumped. Blume dumped the rest of his hand: Wirewood Symbiote, Snarling Undorak, and Everglove Courier.

Fortunately, Parker's morph was Nantuko Vigilante, so it wasn't over immediately. Blume disagreed, and shouted the news to his teammates.

He swung in again and started doing calculations. Parker groaned.

"I thought I stopped him from having infinite mana, but I just slowed him down." --Brock Parker

With the Channeler and Symbiote, Blume was able to bash in for 13, leaving Parker at seven. Parker just shook his head and scooped up his cards. Victor van den Broek happened by and Blume gleefully told him the news.

"So that was infinite mana?" --Victor van den Broek

Both players went down to six for the second game, but their draws didn't suffer for it. Parker opened with Elvish Warrior and Wellwisher. Blume answered with Coast Watcher and Timberwatch Elf. Parker had a morph, and Blume got a Wirewood Elf down, readying his beatdown.

That plan was derailed by Parker's next play: Ambush Commander.

"That is a lot of Elves." --Brock Parker

Blume dropped a Covert Operative, and Parker's response was "Gain 8." This was not going to be easy. They matched morphs, but then Parker's Fierce Empath served him up Towering Baloth. Blume hit with his Operative and watched Parker climbed to 43. He couldn't use his Timberwatch for fear of reprisal from Parker's horde. 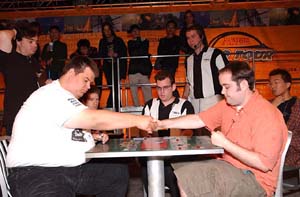 Parker made a 4/4 Canopy Crawler. Blume added a Wirewood Elf. Then they squared off, morph against Glintwing Invoker. Parker activated his Wellwisher but forgot how much he was gaining.

"Get the judge to count. I refuse to count." --Marco Blume

Two turns later, Parker was at 86, and Blume wasn't bothering to hit with his Operative. Blume got himself a Wirewood Symbiote, but a turn later Parker played a Covert Operative of his own. It hit for 5 with the help of Canopy Crawler. The next turn, he attacked and scratched his chin reflectively.

"What life are you at before damage?" --Brock Parker

He sacrificed his Fierce Empath to put Blume at 7. Blume played it to the bitter end, hoping for an egregious misplay, but none came. They were even.

Before the grudge could be settled, however, Budde lost his match against Jensen, and Linde took the third game from Baberowski, giving The Brockafellars a pass to the finals. Blume shook Parker's hand and wished him good luck.

Brock Parker, The Brockafellars A Seat