These two colorful personalities found themselves facing off in the C seat of the 2003 Pro Tour - Boston Semifinals. Baberowski is well known, having won three Pro Tours, two of which with the team he's playing with today. Hungry for a fourth, and third consecutive Team Pro Tour win, he had drafted an aggressive red-black deck full of removal that featured two dragons - Kilnmouth and Dragon Mage. Linde, on the other hand, had a white-blue deck featuring Arcanis the Omnipotent, a bunch of cheap Soldiers, and Pemmin's Aura. 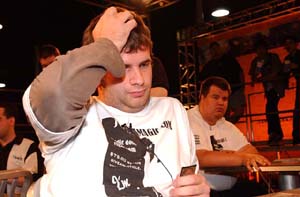 The game started with a flurry of creatures and removal spells, with a Spark Spray finishing off an Aven Farseer and Shock finishing off a Delftblade Elite to make sure Baberowski's Festering Goblin would keep the beats on. Both a Zombie Cutthroat and an Aven Redeeemer were next to fall to Baberowski's removal--this time a pair of Crested Craghorns. Still, the pressure wasn't up too much, with Baberowski's Festering Goblin only pecking away 1 life per turn. It was blocked next turn by Linde's morphed Disruptive Pitmage, taking away all pressure there was. Both players seemed to be out of gas until Baberoswki finally drew a Skirk Volcanist, which he morphed into play. Linde already had an answer to it in Wing Shards, and he played that as soon as the morph entered the Red Zone.

Dirk came back with a Words of War but Linde got right back into the game when he played Arcanis the Omnipotent. Baberowski was unable to remove the Pitfighter Legend, and it seemed like the game would be over quickly. Linde restocked his hand and played out Stoic Champion and Glory Seeker while keeping mana open to Discombobulate whatever Baberowski would plan on doing. The German had a Kilnmouth Dragon to try and come back into play, but Linde's four-mana Counterspell made sure that plan wasn't going to happen. Two turns later, Baberowski conceded, facing an army of creatures and a full hand on the American's side.

Baberowski's start wasn't exactly as he had planned it, with a turn three Wretched Anurid being his first play. Linde answered it with a morphed Zombie Cutthroat, and the two creatures battled next turn. Baberowski had a Solar Blast to finish off the Cutthroat, but he did lose the initiative in the game. However, Linde handed it right back to him, as he didn't have any creatures in his hand. Baberowski tried to make a Crested Craghorn, but as soon as it attacked it fell to a Wing Shards. Bonethorn Valesk was Baberowski's next play, but that too was removed by Linde's white-blue deck. This time he had to use a Pemmin's Aura to finish off the Beast, though. Goblin Grappler was the best Baberowski could muster next turn, and it was answered by a Glory Seeker on Linde's side. Up next was a morph for Baberowski--a Skinthinner, to be exact.

The Glory Seeker was killed next turn, and Baberowski came in for 3, bringing Linde down to 12 life. The American had a morph of his own next turn and traded it for the Skinthinner. He played out his Arcanis during his next turn, but it died to a Cruel Revival, which conveniently provided Baberowski with his Skinthinner again. He didn't play out a morph next turn though, as he had a better threat in Dragon Mage. It was Pacified by Linde, who morphed a Master of the Veil into play. Knowing full well that Matt had a Willbender in his deck, Baberowski was hesitant to unmorph his Skinthinner to keep on attacking. He waited until he drew a Goblin Clearcutter to start attacking, and he finished Linde, who had drawn nothing but lands in the last few turns, off rather quickly after that. 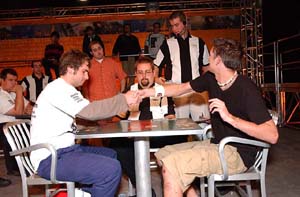 By this time, Kai Budde had lost his match to William Jensen and both these players knew that the Pro Tour finals were on line. Linde was on the play in game 3, which should be a huge advantage in the matchup. He started off by morphing two decidedly mediocre morphs into play--two Disruptive Pitmages. One of them traded with Baberowski's morph in combat, but the German's morph was definitely worse--an off-color Daru Sanctifier. The other Pitmage would nibble off more of Baberowski's life, though, and took the German down to 16 before he found an answer in Gangrenous Goliath.

It was finished off by Linde's Pemmin's Aura to keep the pressure on. Baberowski cycled his Spark Spray into a Solar Blast to take out Linde's morphed Pitmage. On his next turn, Linde summoned a morphed Zombie Cutthroat and a Delftblade Elite. Kilnmouth Dragon came down for Baberowski, but he didn't have the other Dragon to amplify it. Undaunted, Linde attacked with his provoker and morph to deal 2 damage to Baberowski, dropping him to 12 life. The Dragon fell to Linde's Wing Shards next, and when Baberowski played Cruel Revival on Linde's Cutthroat, Linde unmorphed it, causing gasps of amazement from the audience. That was definitely not a good turn for the Phoenix Foundation, although Baberowski did get back his Gangrenous Goliath.

When Baberowski played out his Gangrenous Goliath, Linde had his Dispersal Shield ready, and Linde came in for another attack, dropping the German to a precious 4 life. Stoic Champion was added to Linde's army, and things were looking very bleak for the Baberowski. A Shock and Pinpoint Avalanche later, however, there was only the 1/1 Delftblade Elite on the board. It nipped away 1 more life before Baberowski played out a Bonethorn Valesk. Linde's next turn took a while, as his draw was a Daru Encampment, and he had to choose between finishing off the Valesk right there, or saving his Elite to make sure he could get past the Beast if needed.

He chose the latter option and kept his Elite back on defense. The 1/1 Soldier received a Torrent of Fire from Baberowski and the Valesk dropped Linde to 11 life. Linde's next draw was amazing though--an Aven Liberator. It stopped Baberowski's next attack, even though there was a Crested Craghorn available to provoke the morph, and the Liberator could swing back for 3 the next turn as there was Daru Encampment to pump it's power, and as such, Phoenix Foundation fell in the semifinals en route to their third consecutive win.