espite the large stakes, just two wins away from Pro Tour victory, the friends were having a great time talking about past games and cracking jokes. Having recently dispatched Raphaël Lévy in a very tight match, Tomoharu was feeling loose and ready to go. Kazuya oozed confidence himself, leaning back in his chair with a smirk, eager to begin the fun. The players got mic'd up, received some nominal instruction from the judges and media staff, and got their Semifinals match underway. 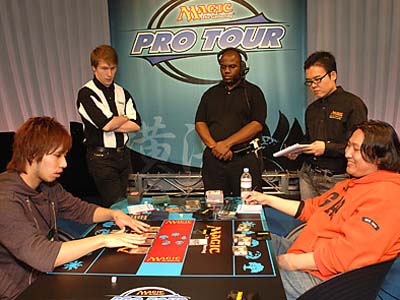 Tomoharu Saito and Kazuya Mitamura, friends and now rivals for the Finals, head into their match happy and relaxed.

Saito kicked off the series with Magus of the Scroll and Sulfur Elemental. Mitamura tried to defend with a morph, but it was Fiery Tempered away. That seemed like a fine time for Mitamura to play Damnation, tapping out to wipe the board clean. Saito used his window to play Timbermare, who axed his opponent what it was like to be minus 5 life. The second Timbermare tried something similar but fell to Cancel. The third one did hit, and suddenly Mitamura was sitting on 4. Damnation again came to clear the board. Saito merely drew his card and tapped six mana-one for Assault, three for Stormbind, and the final two for dealing the final 2. A brutal start from Tomoharu.

Mitamura started with a mulligan, then further increased the hand size difference with an alt-costed Snapback on Blood Knight. Its second attempt to resolve resulted in Cancel from Mitamura, who then tried to recoup with a Shadowmage Infiltrator. Surprisingly, Finkel had no problems hitting Saito. Tomoharu had a new plan, which was simply to throw his hand directly at Kazuya with Stormbind. Things were going well until Kazuya threw in a wrench with a face up Brine Elemental. Saito was definitely unhappy to see the Elemental, and he chucked two cards at the 5/4. With Kazuya at 14 life, Saito tossed out a Browbeat, which gave Mitamura some pause. Make that 9 life; Mitamura made his decision. Finkel continued to hit, followed by Careful Consideration. Kazuya tried the same sequence next turn, but this time Saito responded with Stormbind towards Kazuya's life total. The Stormbind helped out Fiery Temper, which in turn took a Cancel. Saito then threw his last card at Mitamura, bringing Mitamura to 5.

With an opponent tapped out, Saito had a chance to win here with Timbermare or Fiery Temper. Kazuya leaned back, inviting his opponent to topdeck the victory. Saito couldn't meet the challenge and brought Kazuya to 3 with a random shock. Mitamura continued to damage Saito too, and a looming Brine Elemental suggested victory. Saito had one more chance to draw Temper or Rift Bolt, but it wasn't to be. The players picked up their cards and shuffled for Game 3.

Tomoharu quickly kept, while Kazuya had more difficulty with his. Finally, Mitamura decided he couldn't keep and tried again with six. That hand was much easier: an automatic mulligan. At five new cards, Kazuya still looked uncomfortable but, in a display of faith, slammed his hand onto the table and kept. 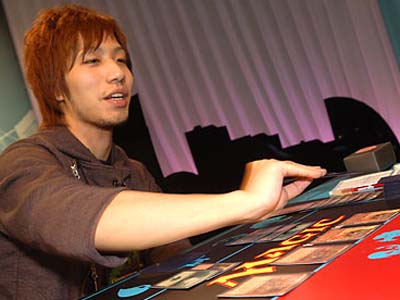 Saito led first with Mogg War Marshal. With a laugh, Mitamura declared "Squire play!" and summoned a face-up Willbender. A suspended Rift Bolt tried to kill the perfect War Marshal stopper but was thwarted by a Cancel. Stymied, Saito merely summoned another War Marshal and passed the turn. Saito soon got down a creature with bite, Sulfur Elemental, and dealt some damage. Strangling Soot took it down soon after, while Mitamura's facedown Willbender took a Rift Bolt. Mitamura's second morph did stick, scarily representing another Shapeshifter / Willbender. Still unable to get past the 1/2 and 2/2, Saito merely played a pair of Blood Knights.

Mitamura tapped out to cast his Careful Consideration, pitching a pair of flashback-enabling Prismatic Lens. Saito studied the board of morph and Willbender.

"My kingdom for a Swelter!" Tomoharu declared hotly (or would have, if he were the type for Shakespeare references and Tom Swifties).

Unable to take the creatures out, Saito merely attacked with his dual Blood Knight and dealt 4 to Mitamura. A Browbeat delivered another 5 damage, bringing Mitamura to a dangerous 6 life. The following turn, Kazuya played his fifth land and passed it right back to Tomoharu. Saito read Mitamura correctly for his Teferi and skipped the attack, although he did respond to the Legendary Wizard with Sulfur Elemental. At six mana Mitamura again passed, representing a variety of spells. Saito was tired of waiting around and swung with all his creatures. Down came a flashed Brine Elemental to help do serious damage to Saito's forces. All Tomoharu could do was play another War Marshal and pass.

Despite the low life, Mitamura was ready to get his beat on and attacked with the 5/4. Another Brine Elemental came down a turn later. And still the morph remained, ready to flip into Willbender or Brine Elemental as needed.

Saito drew and attempted his Stormbind with a laugh. Mitamura considered, then tapped out for a big Draining Whelk. That was just the window Saito was looking for, as he slammed the last card in his hand, a lethal Timbermare. Everything got tapped and Timbermare swung in. Certain death for Kazuya, right?

In classic "Holy Pikula!" form, Mitamura had the perfect counter. His final two cards were Snapback-Snapback, pushing Timbermare to the hand. With no defense, Saito was helpless against 20 power's worth of blue guys attacking. An amazing comeback from Mitamura.

Saito jumped up after the loss, trying to walk/slap it off. He took a moment to compose himself and came back fierce, ready to tackle the remaining games.

Saito started strong this game with a Blood Knight versus Mitamura's defensive "Squire." A morph from Kazuya on the next turn let Saito slip Stormbind into play. Saito had an interesting decision the turn after. He could burn the morph now, skipping potential Willbender difficulties. He decided to let it live, playing War Marshal and keeping two mana available as needed. The next turn's Pendelhaven made the Time Spiral Goblin and pal even more lethal, and in came the army. The 2/2 and 1/2 stepped in front of a Goblin, which attempted to receive a Pendelhaven bonus. Mitamura had the defense, though, flipping and copying Willbender to redirect the +1/+2 elsewhere. Even though the Goblin died, Mitamura was taking more damage and still the chick in the sky was looming…

At five mana, Mitamura blocked the remaining Goblin with Teferi, which in turn died to the 2/3 Goblin and Stormbind. Another morph was attempted on the following turn, to which Saito responded by bringing Mitamura to 6. Strangling Soot finally killed the Blood Knight, but Saito just used Stormbind twice to throw Fiery Temper and a land at Mitamura for the win.

After four kinetic games, the players had one more chance to prove that they deserved to make the Finals. Saito started well here, with a War Marshal and a Soot-eating token. A suspended Rift Bolt frustrated Mitamura from laying a morph, leading him instead to take 3 to the face. The War Marshal continued to hit until Mitamura got six mana, when he again played a face up Brine Elemental. Does Mitamura-san know that creature has morph? 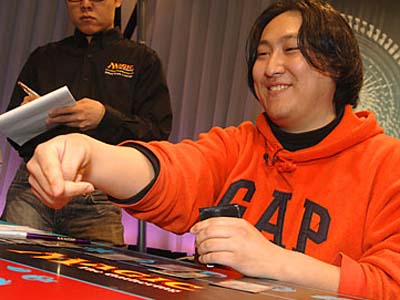 Kazuya Mitamura wants _that_ one.

Tomoharu had a tapped-out opponent. What to do with him? Stormbind with two mana open was the answer. In came the 5/4, which transformed War Marshal to its alternate form. Post-combat, Mitamura played and immediately flipped a Vesuvan Shapeshifter, locking away Saito's untap step. Tomoharu drew and considered for a number of minutes, earning a verbal prod from the table judge. Finally, Tomoharu Saito laid his land and used assault plus Stormbind to destroy the copied Brine Elemental.

Mitamura had no follow-up in his hand to the fallen Shapeshifter. Luckily, very luckily, waiting at the top of the deck was Kazuya's dream card: another Vesuvan Shapeshifter. Mitamura just showed it to Saito, who shook his head, smiled and held out the hand in defeat.

Kazuya Mitamura heads to the Finals!