Maxime hasn't yet had a Feature Match in the English coverage, and he is playing a Nether-Go deck, with three Nether Spirits and an Air Elemental as creatures. Every other card apart from Cremate, two Tsabo's Decree, and three Vendetta is either a Counterspell or a card-drawing card. Pierre's Fires deck has already been covered earlier in the day, and it is slightly unusual with things such as main deck Rith's Charm. Although this is the semi-final match, the loser is not safe for the Worlds team, as only three people form a National Team this year - there will be a third-fourth place play-off while the Final is going on.

Pierre had to think for a long time before keeping his opening draw, with five lands, Saproling Burst, and Rith's Charm. He took two damage from a Brushland and a Karplusan Forest to cast the Rith's Charm on his fourth turn, but Maxime had a Counterspell. A Llanowar Elf did manage to make it into play, but a Blastoderm was Excluded.

Maxime then went down to seventeen life to Vendetta the Elf, clearing the board of everything except land, and Undermined a Saproling Burst, putting Pierre on fourteen, but surprisingly with six cards in hand didn't counter Shivan Wurm and had to Vendetta it, going down to nine.

Sensing that Reichman was out of Counterspells, Pierre attempted a Saproling Burst, but it was Undermined as well. When Pierre did nothing on his next turn, Maxime cast Fact or Fiction when he had five cards in his hand and Pierre had only one. Pierre put the Nether Spirit and the Air Elemental in one pile, and Reichman took these two creatures over Counterspell, and Rith's Edge.

Drawing an eighth card allowed Maxime to discard his Nether Spirit, which he promptly forgot to bring back. This one turn wait didn't really hurt as Pierre drew nothing more threatening than two Birds of Paradise in a row which Maxime promptly removed with Tsabo's Decree.

Pierre killed the Nether Spirit temporarily with a Thornscape Battlemage, which was also Decreed and Maxime went down to six from pain. Pierre drew a card that was comically bad in this situation - Obliterate. Hardly the best thing to do when your opponent has a Nether Spirit in play.

Nevertheless it appeared that Maxime had also drawn the worst possible cards for the situation as when Pierre cast Flametongue Kavu to kill the Nether Spirit, he tried to Daze twice and still failed to counter it. Reichmann played an Air Elemental which now allowed Pierre to cast Obliterate as the Nether Spirit would no longer come back. Pierre then played two Llanowar Elves and they attacked for the first game.

Some horrible play from Maxime handed this first game on a plate to Pierre as Reichman did as much wrong as his cards would allow.

Pierre sideboarded in Kavu Chameleon, Blood Oath, Scorching Lava, and another Obliterate while Maxime brought in his Teferi's Response, and Slay (although for some reason he only brought in two of them and left the other two in his sideboard. 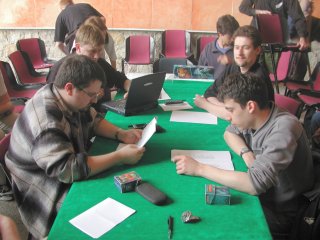 Maxime thought for a while before keeping his hand.Pierre's hand was pretty good and he started to beatdown with a Llanowar Elf, then played a Fires of Yavimaya on his third turn.

Reichman allowed a Birds of Paradise into play, and Pierre chose not to cast the Shivan Wurm in his hand for fear of a Counterspell. Maxime used this lull to play Fact or Fiction gaining two lands and a Counterspell. This was what Pierre had wanted and he cast Rith's Charm while Maxime was still tapped out, getting three Saprolings.

Reichman used Slay to kill a Llanowar Elf and discarded Nether Spirit as he had eight cards in hand. He used his remaining mana to counter the Shivan Wurm, and when he brought back the Nether Spirit it appeared that he had stabilized somewhat at thirteen life.

Maxime used a Tsabo's Decree to clear away the Saprolings and attack with his Nether Spirit, not the best thing to do when your opponent has Fires of Yavimaya in play, and Pierre made him pay for it with a top-decked Blastoderm reducing him to seven.

He had to go down to six to Tsabo's Decree the Blastoderm, which would have allowed Pierre to win by attacking with his Bird of Paradise, using his Fires and then casting Scorching Lava and Urza's Rage, but Maxime had a Foil for the Lava and Slew the Bird.

Both players now had one card in hand. Pierre drew Blood Oath, it was Countered, then Bird of Paradise, also Countered. Every single spell in Pierre's deck killed Maxime with the Urza's Rage in his hand and a Fires in play. Finally down to six life, Pierre drew a second Urza's Rage and took the match.