Malherbaud won the toss and decided to play but a brief pause was caused by Eskeland who asked to change sides of the table so that he could draw from his right hand side. A sacland followed by Duress from the Frenchman showed four creatures, two lands and two spells from which he took Quiet Speculation. 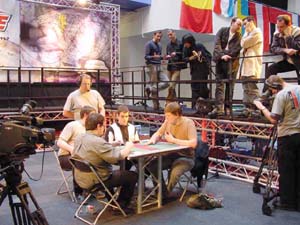 Turn two Mongrel from Eskeland was followed by a Buried Alive for Anger, Arcanis and Phantom Nishoba by Malherbaud. After a Mongrel attack a second dog hit the table but no land was forthcoming. Malherbaud did nothing but lay a land so Eskeland continued the early beatdown taking the Frenchman to thirteen but still couldn't find a third land.

Doomed Necromancer entered play hasted by the Anger in the graveyard so it immediately sacrificed itself to produce a hasted Phantom Nishoba which managed a fourteen point life swing when it attacked. The life totals were now 13 – 20 in the Frenchman's favor.

Eskeland attacked with one Mongrel to keep his opponent's life falling. Malherbaud casts Sickening Dreams for three and Eskeland saved both of his creatures by discarding but a Stitch Together for Akroma, Angel of Wrath was too much and Eskeland scooped. 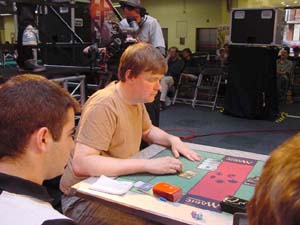 Both players sideboarded and Eskeland decided to play first. Both players kept their opening hands and Eskeland went for the aggro Basking Rootwalla start. Malherbaud duplicated his Game 1 start with Bloodstained Mire sacrificed for a Swamp which in turn was used to cast a Duress taking Quiet Speculation. Turn two and Malherbaud decided to Burning Wish for Zombify. Eskeland got a Compost into play but Last Rites to stock the Graveyard plus the Zombify put Akroma into play and a couple of hits ended the game.

Once again Eskeland decides to play and both keep. Eskeland can only manage an Island turn one but for the third time Malherbaud manages his Bloodstained Mire, Duress trick which raised a round of applause from Eskeland. Forest and Rootwalla followed while Malherbaud sacced another Mire to get another Swamp, cycled a Barren Moor and Entombed an Akroma. Eskeland could only attack with a pumped Rootwalla on turn three but Malherbaud cast Last Rites disposing of Unsummon, Turbulent Dreams and Counterspell.

Malherbaud was on fourteen life but missed a land drop and had no play. Summoning a Doomed Necromancer was attempted by the Frenchman but Eskeland used a now active Merfolk Looter to gain card advantage while saying no to the dangerous black creature with Circular Logic.

Eskeland has attacked Malherbaud to four life keeping in the game using Compost card advantage combined with Malherbaud mana screw and when the Frenchman starts to cast Stitch Together on the next turn he realizes that it will make no difference and scoops. 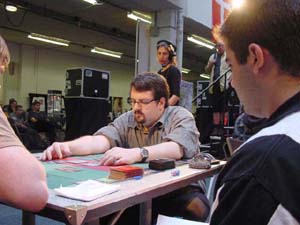 Malherbaud decided to play first and both players kept their opening hands. After another turn one Duress the players discuss the odds of doing it eight times in a row as the Frenchman had managed so far in the top eight. Malherbaud removed a Counterspell then after only a land from Eskeland casts Entomb for Akroma on turn two.

Eskeland cast Quiet Speculation for Roar of the Wurm, Krosan Reclamation and Deep Analysis. Malherbaud summoned a Doomed Necromancer and passed and then Eskeland flashed back a Deep Analysis. Malherbaud cast a second Necromancer and attacks with the first. During the end of turn step Eskeland falls to fourteen life by using his City of Brass to cast Krosan Reclamation from the graveyard which returned Akroma to his opponents deck. He then cast Phantom Centaur next turn to prevent any more cheap shots from Malherbaud's Necromancers but a last Rites for three sent Anger and Arcanis to the Frenchman's graveyard and a Counterspell, Circular Logic and a Turbulent Dreams to the Norwegian's.

Malherbaud has been severely hampered by the fact that he is still on only three land but after a Roar of the Wurm token for Eskeland hit play the Frenchman finds a fourth land. With sufficient mana available Malherbaud cast Buried Alive stocking the graveyard, leaving one black mana open to reanimate Akroma with one of the Necromancers barely pausing before he sent it in to attack for six.

Eskeland desperately cast Deep Analysis trying to find something to help but all to no avail and as he held out his hand in concession Malherbaud pumped the fist with elation.