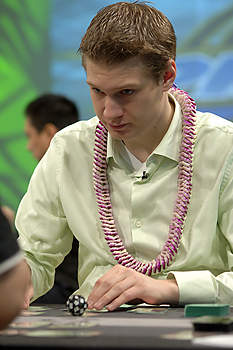 Paul Rietzl always seems to be having a good time, but this time he might make an exception. Paul Rietzl is one of those players who always seems to be having a good time. He’s been in the game for a long time, and he has a habit of just showing up to the events local to him and doing really, really well. West Coast Grand Prix are his regular stomping ground, but he was willing to stretch to a flight to Hawaii having qualified earlier in the year through Grand Prix finishes. This weekend, he crushed with his Esper Constructed deck, and showed himself to be very solid in Draft also, though he admitted that he was a little concerned at the matchup he faced in the Semifinals.

His Semifinal opponent, Kazuya Mitamura has the most experience on Sunday play, this being his third Top 8 appearance. One of these included a Finals place, and he is very hungry to do one better. Mitamura has already cracked the 100 Pro Points barrier to make him eligible for Hall of Fame voting in due course. Staggeringly, he did so in just three years, meaning that he will have a long wait before the ten-year eligibility mark.

Rietzl was on the play, and led with a Forest, a play mirrored by Mitamura. While Rietzl had a Rupture Spire on turn two, his opponent was a little awkward on his mana, following up with a second Forest. What this meant was that Rietzl could get a Nacatl Outlander onto the board before a landcycled Sylvan Bounty could find Mitamura a Mountain.

Paul cracked in with his Cat, and played an Elvish Visionary, which swiftly succumbed to a cycled Jund Sojourners. Paul’s mana was rock solid thanks to Rupture Spire and Veinfire Borderpost, and Mitamura looked to get his into a similar state with Trace of Abundance. What he had to face in the meantime, though, was beatdown from that cat, and soon from a pair of Goblin tokens thanks to Dragon Fodder.

Facing an aggressive Jund deck, Mitamura knew better than to try to get value out of his Deadshot Minotaur, cycling it at the end of turn. Instead, Mitamura found his card advantage in Bloodbraid Elf, which cascaded into Ember Weaver. The Elf ran in, leaving back Ember Weaver as a thoroughly awkward first striking blocker.

Paul was unfazed, though. He had Sangrite Backlash to kill off the 3/3 spider, and a Putrid Leech to follow. His attacks knocked Mitamura to 12 before Mitamura returned fire with his Elf, taking Paul to 14. Paul was ahead on life, but his board position was suddenly overshadowed slightly as Rhox Brute and Goblin Outlander came from Mitamura.

Now all Paul could realistically attack with was Putrid Leech. This he did, which prompted a double block from Mitamura. Paul looked interested by this turn of events—clearly Mitamura was playing around the Colossal Might in Rietzl’s deck. Rietzl pumped his Leech and traded with his opponent’s 4/4 before playing Cavern Thoctar. 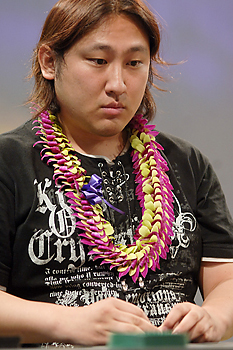 Kazuya Mitamura looks a little grim as well. Mitamura didn’t like the idea of not having the biggest creature on the board, and played a Jungle Weaver to catch up. Each player was now at 12, and the game looked a little stalled, with a few creatures in play on each side. Cavern Thoctar got stuck in for Rietzl, and, like the Leech, met a double block. With a power pump, Rietzl traded his big threat for Mitamura’s big Spider, and followed up with Sacellum Archers. Rupture Spire allowed for the ability of the Archers to go live on the following turn, and Mitamura thought carefully about what to do. He chose to use a Sangrite Backlash to kill the Archers before they could get going, before swinging in with his team of Goblin Outlander and Bloodbraid Elf. These attacks met a set of trades with Paul’s creatures that left the board clear.

Mitamura’s follow-up was Carrion Thrash, while Rietzl’s was Valley Rannet. It was Mitamura who had more follow-up though, with a Naya Battlemage further building his board.

When Rietzl attacked with his 6/3, Mitamura was quick to block. A Colossal Might left the Japanese player down one creature and 6 points of life. Mitamura had a little think about what best to return with his Carrion Thrash upon its untimely demise. He went with Bloodbraid Elf, hungrily eyeing Rietzl’s 12-point life total. On his turn, he cast the Elf and found a Vithian Stinger with cascade. There was a second Stinger to come from Mitamura’s hand.

Mitamura’s deck was better in the late game than Rietzl’s, and this clearly showed as he killed off Valley Rannet with Blister Beetle and his two Stingers, allowing him to enter the red zone. A Vengeful Rebirth sealed it up.

Paul was on the play in the second game of this best-of-five match, and was quick to keep his opener. He had a Veinfire Borderpost for the second turn, and followed up with Hissing Iguanar on turn three. This did not leave Rietzl overly excited by Vithian Stinger on turn three from Mitamura, but a Scarland Thrinax at least left him with something to do with his Lizard.

Mitamura cast Bloodbraid Elf on turn four, netting a Naya Battlemage for his trouble. Rietzl’s Iguanar met its inevitable final resting place as a +1/+1 counter for Scarland Thrinax, A Sacellum Archers went the same way with damage on the stack after it blocked and traded with Bloodbraid Elf.

Mitamura was on the offensive with Monstrous Carabid, knocking Rietzl to 15, as Rietzl declined to block with a freshly cast Valley Rannet. He was gradually getting further behind on the board, and just watched on as Deadshot Minotaur joined Mitamura’s powerful beatdown squad.

Rietzl attacked with his 4/4 Thrinax and that Valley Rannet. Mitamura blocked the 6/3 with his Naya Battlemage, and the 4/4 with Deadshot Minotaur before pumping his Deadshot Minotaur using the Battlemage. Rietzl had tricks, though. He cast Violent Outburst, cascading into Elvish Visionary. He hadn’t hit the Colossal Might he had perhaps been hoping for, but still traded with each of Mitamura’s blockers and drew a card.

Mitamura was all attacks all the time now, again getting in with Monstrous Carabid, putting Rietzl to 11, and following up with Jungle Weaver. The best defence that Rietzl had was a Skeletonize on Vithian Stinger, which netted him a nice blocker. Unfortunately for Rietzl, a Blister Beetle had other ideas, and the very next turn he was scooping up his cards in the face of some big attacks and pump from a Violent Outburst.

“It’s a long road back now,” declared a weary-sounding Rietzl. Before the match he had said that he felt his deck was a bit of a dog to Mitamura’s, and his prognosis had appeared correct early on. 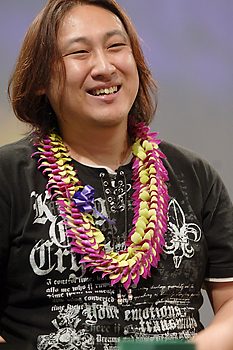 Mitamura cheers up quickly. In the third game, both players kept their openers, and Rietzl had a turn-two Druid of the Anima to potentially power out some explosiveness. The acceleration from Mitamura was Trace of Abundance, ensuring that he wouldn’t be behind on mana. Rietzl had a Hissing Iguanar for his third turn, but again had a little frown when Vithian Stinger showed up for his opponent.

Mitamura played a Monstrous Carabid, and in Rietzl’s upkeep killed off Druid of the Anima with his Vithian Stinger. After a little thought, Rietzl cast Dragon Fodder and passed. There was to be no blocking for these Goblins though. They held back in the short term, and looked on, much as Rietzl did, as Monstrous Carabid rumbled in and Drumhunter joined Team Japan.

Reitzl played a Cavern Thoctar, but was cold to Mitamura’s next play. The Japanese pro cast Quietus Spike and immediately equipped it to Vithian Stinger, making for a mini–Visara the Dreadful that could tap to kill off a creature. Suddenly, the situation for Rietzl was irretrievable. Just one draw step later, Rietzl had extended is hand.

At the end of the match, Rietzl was quick to complement his opponent. “All the way through the match he played perfectly. I kept trying to get little incremental edges to get into the game, but at every turn he played around every trick I had.”

Mitamura was all smiles. He shook Rietzl’s hand and went to talk with a crowd of excited Japanese players—he was in the Finals again!

Kazuya Mitamura defeats Paul Rietzl 3–0 and advances to the Finals!

1 Sangrite Backlash 1 Yoke of the Damned

1 Yoke of the Damned 1 Pestilent Kathari