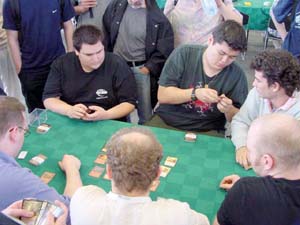 Andre attacked again with the Flock and played Barkhide Mauler to stop the multi-pedal Invoker. This didn't work out too well since Wilfried had Accelerated Mutation. Andre played a Kurgadon, which is a pretty good card for him in the matchup. Once it gets counters, Wilfried is going to struggle to deal with it. Ranque could have attacked with the Invoker to trade for the Kurgadon. He just played a Morph instead.

Delere dropped an Aphetto Vulture, making Kurgadon 6/6 and swung. This dropped Ranque to six. Wilfried attacked with all the morph and Invoker, leaving the Sledder on defense. He unmorphed Titanic Bulvox for a total of nine damage putting Delere on eight. Andre would win if he had any removal spell for the Goblin Sledder, but he didn't. He swung anyway and played Call to the Grave. Ranque lost the Invoker, but Bulvox did seven more putting Andre on one. Ranque had a Symbiotic Elf – fairly good against the Call. In any case it didn't matter as Andre had to sacrifice his last creature and didn't draw anything to stop the Bulvox. 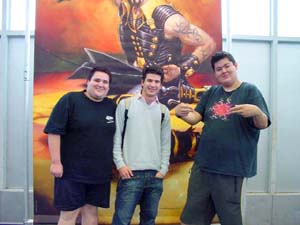 Andre played an early Withered Wretch and then a turn five Call to the Grave. This meant that Wilfried couldn't play any creatures although he only had a Wirewood Elf in play to lose. Unfortunately he doesn't have much non-Extra Arms removal. He went down to eight life with a Skirk Marauder in hand, but then found the sixth in time. Andre's Aphetto Vulture was Scattershotted, but he had a Kurgadon to keep Call to the Grave around until he could replay the Vulture.

Wilfried got to eight mana and then could kill the Vulture with Skirk Outrider and Krosan Vorine in the same turn allowing him to keep the Vorine alive for long enough. At the end of the turn there were no creatures in play, so Call to the Grave was buried. Even so he was only on five life and Andre had Aphetto Vulture back in play. 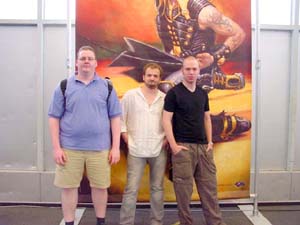 Wilfried made Totem Speaker and Symbiotic Elf, and went down to two from the Vulture. He topdecked rather a good card – Venomspout Brackus. This gave him three life from the Brackus. Wilfried's attack knocked Delere to fifteen. The German put Wilfried down to two for the second time and passed the turn without playing anything else. Ranque attacked with all his men and used Accelerated Mutation to give the Brackus +7/+7. This made seventeen damage in total – game and match to Wilfried Ranque!

Jose made Enormous Baloth, Rene Rock Jockey. The South American then drew Anurid Murkdiver, Kraft had no answer and the South American/French connection were through to the final. Rolf didn't want to fight on against Carlos and conceded since his match was now irrelevant.