Levy is a French Pro with a lot of experience. He has a very good blue-white deck with three Echo Tracers and a red Splash for a couple of Skills. 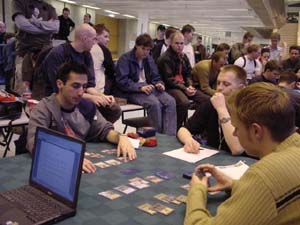 Jensen, whose previous best performance was 36th at Euros, has a pretty good blue green deck with some good tricks and useful fatties.

Levy had a very slow start in the first game. He summoned a Cloudreach Cavalry on turn two and didn't make another play until a Daunting Defender on turn 5. Jensen swiped for a bit with morph, Ultimus and Keeneye Aven.

A second Defenders held only the Ultimus back as Jensen brought a Brontotherium onto the table. Levy could only reply with a tricky morph.

The ground stalled up a little with Jensen holding the upper hand because of his flier.
He added an Ascending Aven to the mix and Levy attempted to outtrick him with an Ascending Aven of his own to give the Cavalry Flying.

The Dane had a further trick and a Brackus unmorphed to shoot down the Cavalry.
Echo Tracer sent the Brackus back and a Pacifism dealt with the Keeneye but it only put the game back into a neutral state.

A couple of morphs appeared on either side and the Dane plucked up courage to send one of his mystery creatures into the red zone. Levy gangblocked it with everything and the end result was a Lorian and defenders heading to the graveyard. Both players were looking for breakthrough.

The Dane decided he had enough as it was. He charged in with his team and Levy flipped over a Pitmage before scooping. 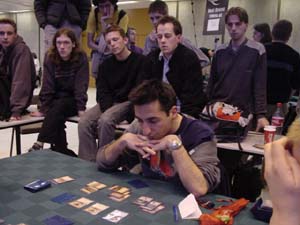 In Game 2 there was no action until turn three when the inevitable facedown monsters came into play. Levy took first blood as his Ascending Aven went to the skies.

Jensen swung back on the ground and summoned a Mistform Ultimus. Levy's Sage Owl seemed less than impressive but it found a Lavamancer's Skill and Echo Tracer in the top 4 cards. Levy had the mountain in hand and thought about what order he wanted to draw the cards. They went back Tracer, Skill, land, land.

Jensen swung for another six and added a Covert Operative.

Harsh Mercy from Levy only killed a facedown Seaswift and he summoned his Tracer face down. Levy needed to get busy though. Another attack from Jensen put him to 7 and a Flamewave Invoker came into play.

Levy tried to use the Skill on the Sage Aven next turn to kill the Operative. Jensen saved it with a Vitality Charm and suddenly Levy was being attacked for 8. His Echo Tracer blocked the Invoker and bounced the Ultimus to buy some time.

Jensen summoned a Spitting Gourna, putting on the squeeze. Levy was down to 4 life and despite the Skill on his Sage Aven, in some trouble.

There was some amusement as a tired Levy had to count his permanents and cards to work out whether he'd drawn a card or not. He hadn't and it looked pretty good as a Slipstream Eel entered play.

The Covert Operative swung again, and fearing some kind of pump effect, Levy went to 1 and used the Skill to kill it at end of turn.

Now the Frenchman looked to have some control, but on a precarious 1 life.

Ascending Aven took down the Gourna with the help of its skill enchanted brother and the board was left to the enchanted Aven and an Eel to Jensen's Ultimus.

The game went into tense moments. Jensen taking a hit from the Eel, attacking back for enough to kill Levy. Only for the Frenchman to have a Renewed Faith. Levy attacked back only for Jensen to have the Tethers. Then Jensen couldn't find another trick or blocker with higher than two toughness and it was time for a decider.

The last game again saw the build up of morphs. Levy had the early Cavalry, but no b 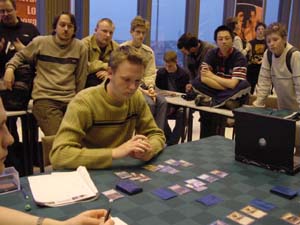 irds to send it to the skies.

Jensen sneaked through two damage with a morph before adding another.

Then a Dive Bomber appeared and Levy's Cavalry was back through for 3 damage.

The game turned into a race of morphs vs. fliers. Then Levy absolutely destroyed Jensen with a Harsh Mercy that killed every one of the Dane's morphs while the Frenchman's fliers survived.

The Dane tried to recover with a Flamewave Invoker and morph but he'd lost too much tempo and couldn't stop the fliers.

The Harsh Mercy had quite simply been devastating.