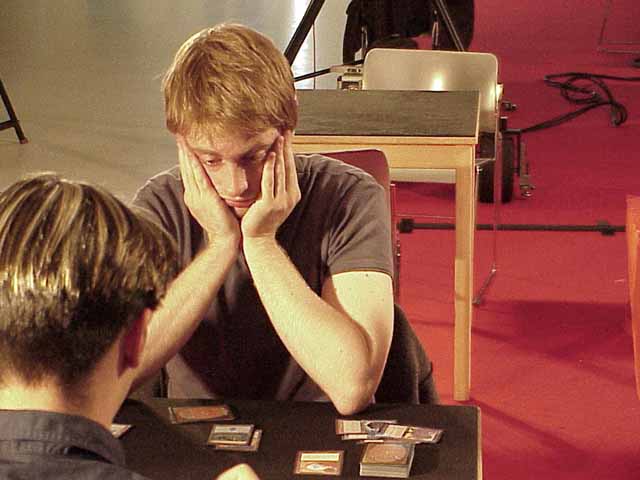 This matchup is favorable for the Rickard Österberg's Accelerated Blue deck. The first game should hand the advantage to Raphaël Levy's Replenish deck, but after siding the Machinists and Annuls swing the balance heavily towards the other side. However, with Daze in the sideboard Levy has a good chance of winning if he holds his serve in games 3 and 5, assuming he wins game 1.

Rickard wins the toss and elects to play.

The game starts off with a Port battle, Raph having two and Rickard one, until, in his fifth turn, Levy tries to lay an Attunement - which is annulled (and a Miscalculation is cycled). A Dust Bowl hits the table, then Levy tries for a Parallax Tide - Österberg responds by cycling a second Miscalculation, draws nothing and takes it. 3 Islands are phased out. 2 turns later, Raphaël has tutored for Attunement and laid it with no defense from the other side, then relayed it, discarding 2 Opalescence, Wrath of God and Parallax Wave. In his next turn the tide fades away leaving Rickard with Port capability and a Thwart to Counterspell the Replenish. Raphaël still has another Replenish in hand, but does not cast it for a while - hoping to get an opportunity to back it up with a Counterspell. However, a couple of turns down the line he is facing a Morphling and a Dust Bowl and a Port, so he shuts his eyes and hopes - and it resolves! A whole lot of enchantments hit the table and the Swede concedes with his Morphling faded out. 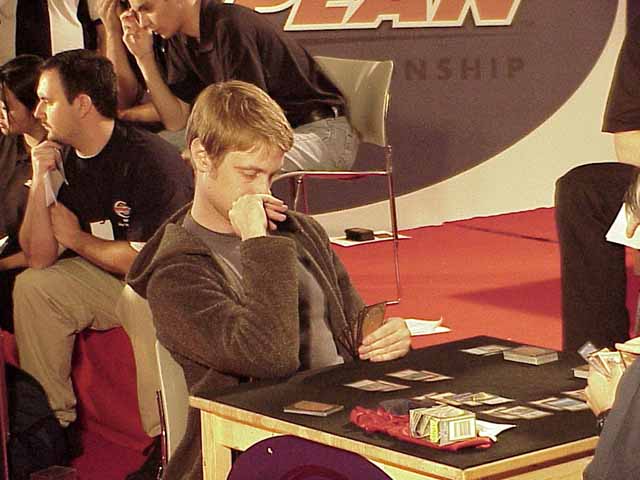 Raphaël spends some time moving between siding in his Cursed Totem or keeping Seal of Removal - the problem being the machinist. I believe that the Totem is the correct choice as it allows you to fade out Morphling, stop the Machinist working and Masticore shooting your enchantments. For this game he decides on the Seal. Rickard takes out 3 Treacheries (not 4), 2 Kegs and 3 Masticores are also left in the board.

By his third turn Österberg had 3 Islands in play and a Monolith, whereas Raphaël has an Island and a Port. The Swede has not been ported though, because Levy didn't want to risk a Port being dropped by the other side, so he made a Stronghold Machinist. To add salt to the wound he then made Ports on turns 4,5 and 8! Raphaël meanwhile is trying his best to deal with the Machinist by Tutoring for a Seal, bouncing it and attempting to cast Tide (counterspelled). The Machinist hits again and when a second Tide doesn't resolve and a Morphling starts coming in for 3 the Frenchman concedes.

Now Levy decides that that Totem would have been really nice last game and puts it in. Rickard replaces his final Treachery with a third Powder Keg.

This game was really quick. Levy actually manages to make a turn four Parallax Tide. He did this by porting an Island in Rickard's turn, leaving him with a Port and an Island. In Levy's upkeep Österberg decides not to Port him as he has a Miscalculate in hand, but a Daze deals with it and the Tide hits the table. In his fifth turn Levy Frantic Searches an Opalescence and a Wave into the bin, Replenishes and hits him for 4 with the Wave.

No sideboard changes now from either player.

Rickard's opening hand is really good and by turn four he had 2 Islands and 2 Ports on the table. 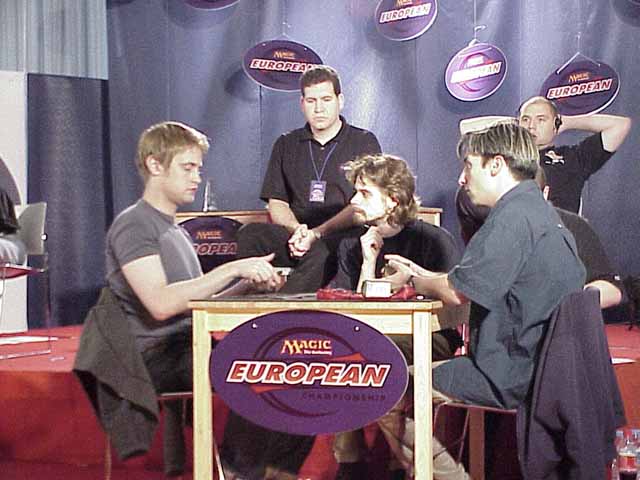 The first spell is cast by Levy who, having been ported once, attempted to lay an Attunement which was duly Annulled. In his nest turn a Frantic was Miscalculated and Levy missed a land drop. The turn after another Frantic is Counterspelled and Levy once again misses a land drop. Österberg then casts Opportunity in his main phase and drops a Stronghold Machinist with once blue mana spare. Levy's Parallax Wave is then Annulled, a Scrying Glass hits the table and the Machinist sets about preventing anything from getting through. Raphaël is not going to give up that easy though because Rickard might have had no actual counterspells in hand. In his next upkeep a little rules problem occurs though as Österberg makes a slip in his knowledge of the rules: Still lost in fifth edition the Swede forgot you could float mana through to the draw phase from the upkeep, so he said "So you burn then" when Levy had done so, then drawn a card. Unfortunately for him suggesting that his opponent should take mana burn implies that he has no fast effects before the main phase - so Levy could take the burn without getting ported a second time and had one more mana than usual in his main phase. Still facing down the Machinist though, Raphaël conceded when, on Casting a Lilting Refrain, Rickard tapped a Scrying Glass to view his hand - he obviously new he couldn't win and didn't want to show some of his sideboard choices.

Raphaël says "How many Ports do you draw each game?" 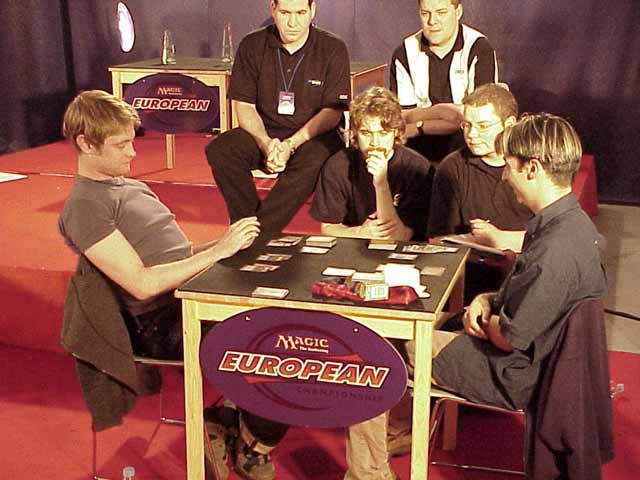 They both then mulligan down to six and Raph opens up with an Adarkar Wastes. This time though it is Raphaël who gets 2 ports by turn 3! In the meantime a Scrying Glass has been Dazed.

On turn four if Raphaël had drawn an Island he could have cast Tide with Daze backup and secured the game, but he doesn't. However if he Frantic Searches he still can, but the Search is Counterspelled. From this point it looks like Rickard will win because Raphaël missed two land drops and when he did draw land it was non-blue. A Scrying Glass is no active and Rickard sees that Levy has 2 Tides, a Frantic Search and an Opalescence, but his Adarkar Wastes has been destroyed by a Dust Bowl, so he has no sources of blue at all. The Opalescence manages to find the table, then a Masticore is laid from the other side, the Swede knowing that Raphaël has no fantastic card in hand at this stage. The Frenchman draws an Island and casts Frantic Search though and if he hits a Replenish he will win, but he draws two land and discards two non blue mana sources. 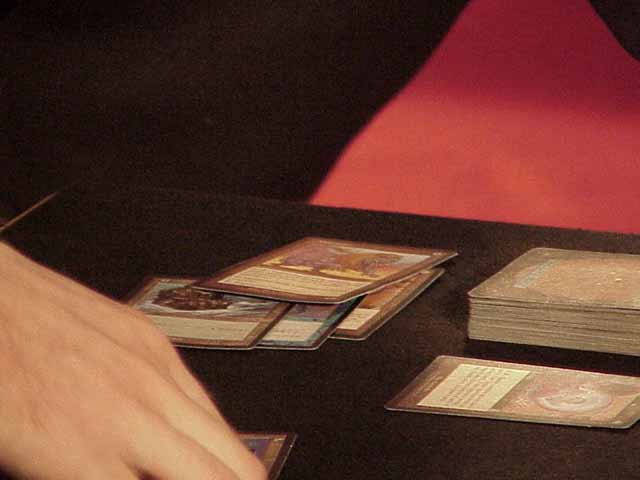 Rickard forgets to pay the upkeep on his Masticore! He is then Ported twice. Levy then draws a Replenish and plays a Tide to try and flush out a Counterspell and he does, but a Daze deals with and the Tide hits. A tenth turn Replenish then strikes and Raphaël makes it through to the final.