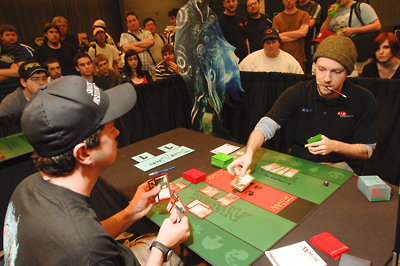 Marsh Usary and Michael Jacob keep more than just their heads warm as they battle for a spot in the Finals.

Michael Jacob has been making a run at a second consecutive U.S. National team, but this time, his eyes were on first place. Marsh Usary stood in the way of that dream. Both players were sporting mono-red concoctions similar to the version of the deck Shuhei Nakamura and Tomoharu Saito brought with them to GP–Buenos Aires. This game should be a real barn-burner and has the potential to be over lightning fast. Insert additional flavorful red pun here.

Jacob decided to have a little fun with Usary before the match started. Usary won the die roll and made his decision about whether to play or draw.

"You’ll draw first?" Jacob asked him with a smile.

"I just wanted to make sure I heard things right. So I’m playing first, right?"

"Uh, judge," Usary jokingly called, as he caught on to the joke.

For a mono-red mirror match, this one started off slowly. The first addition to the board other than lands was an Ashenmoor Gouger (apparently pronounced "googer") from Jacob on the third turn. Usary was ready to burn it away, though, with an Incinerate and a Shock. With two removal spells out of the way, Jacob felt comfortable playing a Blood Knight and Magus of the Scroll to an empty board. When Usary passed the next turn, Jacob upped the ante with a Demigod of Revenge. Usary had an Incinerate for the Blood Knight, but the Demigod was too big for Usary to deal with. Still with zero nonland permanents, Usary conceded when Jacob threw a Flame Javelin his way. The game took six turns, and about as many minutes.

"So how old are you?" Usary asked Jacob as they shuffled their sideboarded decks. 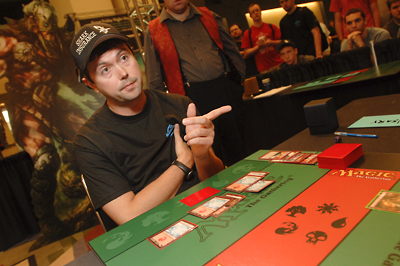 Usary passes the turn.The second game started out much faster for Usary, with a first-turn Mogg Fanatic and second-turn Blood Knight. Jacob, who had to mulligan, was not as fortunate. He had a Skred for the Blood Knight, but no additions to the board until his Ashenmoor Gouger on the third turn. The Gouger was pretty big, though, and would most likely require two cards to deal with.

Usary dropped the potentially powerful Figure of Destiny into play on the following turn and immediately leveled it up. When Jacob attacked with his Gouger on the following turn, Usary chose to Lash Out and use his Mogg Fanatic to finish the deal. Jacob simply shrugged and replaced it with another.

Usary added another level to his Figure of Destiny, and attacked Jacob for 4. Jacob took it, and then untapped and took care of the Figure with a well-timed Flame Javelin. All Usary could do was untap and pass the turn back to Jacob, who got his chance to put the pressure on. He attacked for 4, dropping Usary to 12. Usary, holding two cards, chose to Flame Javelin Jacob instead of his Gouger at the end of his turn, dropping him to 9. He then untapped and played Lash Out on the Gouger during his upkeep, winning the clash and dropping Jacob to 6. This left him with an empty hand, and his Keldon Megaliths finished the Gouger off.

The card he revealed with his clash was a Figure of Destiny, which he put on the bottom of his deck. With Jacob’s Magus of the Scroll online, he didn’t want to get blown out, and decided to dig for some burn to finish the job. What he found was a Demigod of Revenge, which prompted a "Nice topdeck" from Jacob, and dropped him to 1. Jacob drew his card and conceded.

Usary started with a turn-one Mogg Fanatic this game as well. Jacob had a Figure of Destiny, which he waited until turn two to play. When Usary attacked in with his Fanatic, Jacob blocked with his Figure of Destiny. After damage went on the stack, Usary chose to throw the Fanatic at Jacob, which allowed Jacob to pump his Figure to survive. This forced Usary to blow a Shock to get rid of it before replacing his Fanatic.

When Jacob didn’t make a play on his third turn, Usary had a window to regain the initiative. He filled his board with a Blood Knight and a Figure of Destiny. Jacob started to restore some parity by playing a Murderous Redcap to kill Usary’s Blood Knight. Usary got to pump his Figure of Destiny on the following turn, but didn’t have enough mana available to take it to the next level. Jacob took advantage of this and used a second Redcap to finish it off. This left Usary with a lone Mogg Fanatic, which got killed on the next turn by a third Redcap.

Jacob sent his other two Redcaps in to try and murder Usary as well, but one ran into a flashy Sulfur Elemental. The returning Redcap dropped Usary to 15. Jacob drew and played a Demigod of Revenge, but Usary was ready to dispatch it with a Flame Javelin. When Usary drew his card, he asked Jacob if he had another Demigod. Jacob’s only response was an exaggerated shrug. Usary passed the turn and then sighed with relief when Jacob just attacked with his Redcaps. Usary got to block the smaller one with another flashed out Sulfur Elemental. Jacob had more gas, though, and dropped a Magus of the Scroll and an Ashenmoor Gouger to play.

Usary managed to draw and play a Demigod of Revenge, but he was already low enough that Jacob could just Incinerate him and attack for the win. 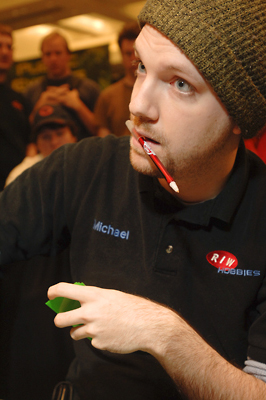 Jacob finds an unconventional use for a Pro Tour pen.Usary started the game with a Mogg Fanatic, which Jacob quickly matched with a Magus of the Scroll. He was more than willing to run his Magus into the Fanatic to clear the way for his figure of Destiny. Usary had a good counter to the Figure, though, as his pro-white Blood Knight could block the Figure all day, assuming it ever got to the dangerous level. For now, though, Usary just kept attacking and played another Mogg Fanatic.

During Jacob’s draw step, after he had drawn his card, Usary chose to Lash Out the Figure, killing it and denying Jacob the chance to improve this turn’s draw. Even still, he kept the pressure high with an incredibly difficult to kill Ashenmoor Gouger. Usary made another Blood Knight, which, in a mirror of last game, met its demise at the hands of a Murderous Redcap. Usary sent his other Blood Knight and Mogg Fanatic into Jacob’s Redcap. The little bloody man jumped in front of the Blood Knight (there was a lot of blood in this match). The first strike damage killed the Redcap, allowing it to come back and kill the Mogg Fanatic before it could deal its damage. Usary threw the Fanatic at the Gouger and Incinerated it off.

Jacob drew his card, played a Demigod of Revenge, and swung in to drop Usary to 9. Usary was still stuck at four lands, and had a Demigod of his own in his hand, but he couldn’t seem to find the fifth land to get it into play. When Jacob attacked with his Demigod and then threw a Flame Javelin to deal the last 4 points of damage, Usary realized that it didn’t matter. Michael Jacob made his second consecutive U.S. National team, and was one step closer to his real goal of becoming the U.S. National champion.

Michael Jacob defeats Marsh Usary 3-1 and advances to the Finals!