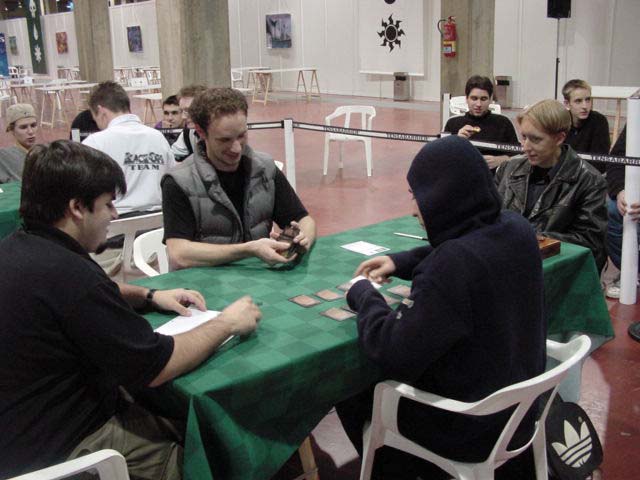 Ryan started by rolling a twenty giving his opponent one chance in forty of getting to go first. Ricard brought forth his elephant necklace, his foil Ertai the Corrupted and other luck bringing things to combat the Canadian currently living in Amsterdam.

Ryan laid a first turn Island but Ricard wasn't impressed as he laid a Mountain and a Thunderscape Apprentice. A second Island appeared on Ryan's side and he summoned a Dream Thrush. The apprentice went into battle and was joined by a Might Weaver on Ricard's side. The frustration was very visible with Ryan when he didn't play a third land and he complained about having lost two games already against Ricard due to manascrew and asked if that was the only way he could win. He decided to attack with his Dream Thrush reducing Ricard's life to 19. Fires of Yavimaya was Ricard's turn three play and he attacked Ryan down to 16. Ryan's draw didn't give him the land he so desperately wanted and he used the Dream Thrush to play a Duskwalker. Horned Kavu appeared on Ricard's side and the apprentice was returned to safety in his hand. Ryan blocked the Might Weaver with the Duskwalker but Ricard saved his creature with an aggressive urge and brought Ryan down to 13. Opt was the next card Ryan drew and using it finally gave him another land. He cast Sleepers Robe on Dream Thrush and attacked to draw a card. Unfortunately for Ryan this was the last thing he did as his opponent played Kavu Aggressor and Thunderscape Apprentice, attacked for 9 damage which became a fifth turn kill when Ricard cast explosive growth and sacrificed his Fires of Yavimaya.

Commenting on his opponents cursed shuffling technique Ryan gave his deck to the judge for the final shuffling. Ricard also trusted the judge more than his opponent and Ryan decided to go first again. Ricard cast a first turn Thunderscape Apprentice this game again and a second turn Rage Weaver. Ravenous Rats was Ryan's first spell and Ricard discarded his Obliterate. Ricard seemed color-screwed when he laid his third Mountain and attacked. The Ravenous Rats traded with the Rage Weaver and Ryan went down to 18. Ryan played a fourth turn Volcanic Imp and Ricard managed to draw his first forest playing a Fires of Yavimaya electing not to attack. Ryan enhanced his flyer with Sinister Strength and brought Ricard to 15. In an amazing turn Ricard played Thornscape Familiar and a Sparkcaster returning his apprentice to his hand attacking Ryan down to 10. Ryan failed to draw red mana for his Flametongue Kavu and stayed home with his imp having the option to cast Reckless Spite if his opponent would get to many attackers. Ricard knocked on his deck with the foil Ertai and had another amazing turn. He emptied his hand by casting Thunderscape Apprentice, Might Weaver and Yavimaya Barbarian. Even though Ryan used Reckless Spite on two creatures Ricard had enough creatures left to kill Ryan with the last points coming from his sacrificed Fires of Yavimaya. This time he killed Ryan turn six to end one of the fastest Grand Prix semifinals ever.