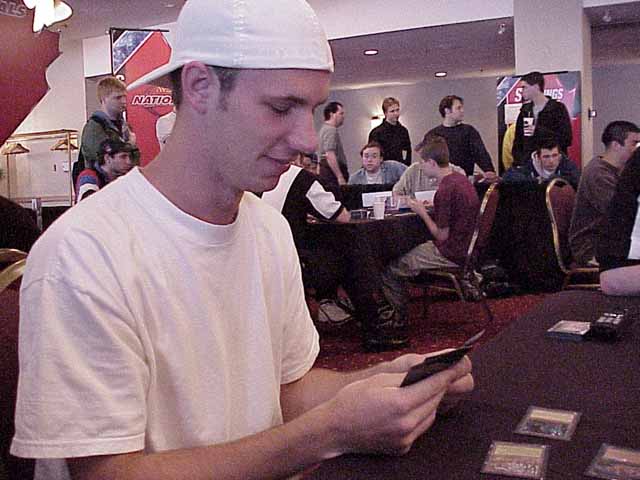 Ryan Fuller needed five games to beat Michael Gurney's monoblue deck in his quarterfinal match while Terry Lau needed five games of his own to take down Roland Aw. In the semifinals, it was Fuller's Stompy deck versus Lau's Tinker deck. The winner would clinch a spot on the Canadian national team and advance to the finals for the right to play for the championship title.

Lau had to mulligan twice before game one and eventually decided to keep a one land, five card hand. He played a Rishadan Port on turn 1 and then got smashed for 3, 5, 7, and 7 without ever drawing a second land. 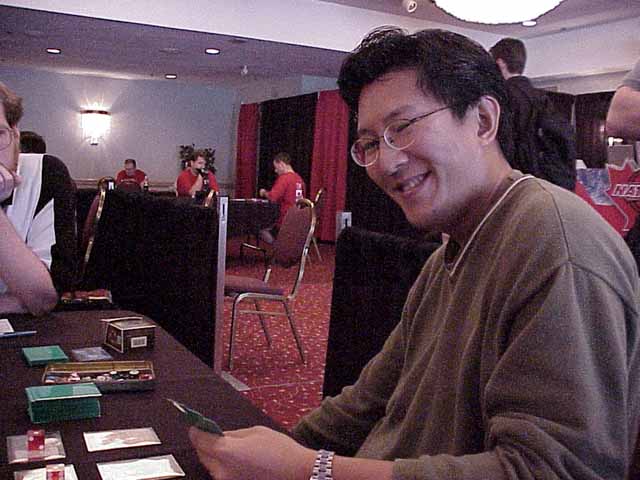 Lau mulliganed again before the second game and then led with Rishadan Port instead of an island, knowing that Fuller probably brought in Rushwood Legates from his sideboard. Fuller played a pair of early Wild Dogs, but then Lau played a Tangle Wire. Tangle Wire #2 (and a Rishadan Port) prevented Fuller from doing anything for his next three turns. After the first Wire was out of fading counters, Lau sacrificed it to a Tinker, commenting "I should have had these [Tangle Wires] in the main deck." Lau decided to Tinker for Metalworker. Fuller said "uh-oh", but then blew it up with Uktabi Orangutan. Lau played a second Metalworker on his next turn, but by then his Wires were no longer shutting down Fuller's offense. Lau was trying to create a turn where he could dump a large amount of mana into his mana pool and then cast Masticore and shoot down all of Fuller's creatures. Fuller smashed him low on life and then dropped a second Uktabi to blow up Metalworker #2.

Lau wondered aloud after the game if he should have "slow-played" it. Instead of Tinkering out Metalworker he could have Tinkered for a third Tangle Wire and kept Fuller pinned down for a few more turns during which he, hopefully, could draw some more mana.

Lau had yet another weak draw and it was time for mulligan #4. Lau's new six card hand was quite good and he led with turn two Metalworker (thanks to Saprazzan Skerry). Fuller played a second land and windmilled Cursed Totem (an artifact that prevents players from using creatures' activated abilities) onto the table. The Totem not only shut down Metalworker, but meant Fuller did not need to worry about any future Masticores. Lau had to settle for Grim Monolith and Thran Dynamo on his third turn while Fuller added Rancor, Wild Dog #2,and Rushwood Legate to his swarm.

Lau paid 7 mana for Phyrexian Colossus and looked like he might be able to attack with it and steal Fuller's Wild Dogs. However, Fuller had Wild Might to deal an extra five points of damage to Lau and stop that plan. Lau then cast a Mishra's Helix and was setting up to Tinker Crumbling Sanctuary into play on his next turn while simultaneously preventing Fuller from having enough mana to smash it with Uktabi Orangutan. However, Fuller had the Giant Growth he needed to finish Lau off before that could happen.

Basically, Ryan Fuller played well and had all the answers, and Terry Lau's one good draw was shut down by Cursed Totem. The result was a very lopsided semifinal and a berth in the finals for Ryan Fuller.