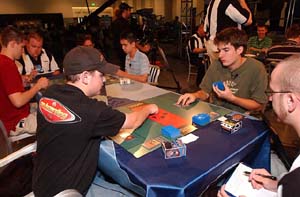 A crowd has gathered to watch these matches, though it could have something to do with the U.S. Nationals semifinals going on at the next table. Regardless, I'm certain that at least Sam and Peter's parents were cheering their kids on. Most of the spectators were kids who'd played in the JSS previously, either in the championship yesterday or the grinders on Friday, and all were interested in seeing who would win this match.

Peter led with an island, and Sam answered with a Karplusan Forest and a Llanowar Elf. Peter then played a forest and a Merfolk Looter. Sam sacrificed his Wooded Foothills, going to 18, and found himself a real Mountain. Sam then tapped both his lands and his Elf and played a Call of the Herd.

At Sam's end step, Peter activated his Merfolk Looter and discarded a Roar of the Wurm. He followed that up with a Wild Mongrel, but not a third land. Sam attacked with the Elephant, which Peter declined to block, and Sam followed up with a Violent Eruption. Even though he took two damage to cast it, he managed to kill Peter's Mongrel and Looter with one spell.

Peter's next play was another Wild Mongrel, but he still hadn't found any more lands – he'd been stuck at two for two turns in a row now. Sam, capitalizing on the weakness, played an Elephant Guide on his Elephant token, and sent the Elephant into the Red Zone. Peter declined to block again and went to 11 life.

On Peter's next turn, he untapped and passed, still not finding another land. Sam played a Basking Rootwalla and attacked with the Elephant again, which Peter skillfully Unsummoned. Unperturbed, Sam flashed back the Call of the Herd, and passed the turn with two cards left in his hand.

On his next turn, Peter drew and played yet another Wild Mongrel. He was still stuck on two lands, a single forest and a lone island. A Phantom Centaur showed up on Sam's side of the table, and things looked pretty grim for Peter. He drew and passed again, resting his head on his hands in frustration.

Not drawing lands for five straight turns, especially against a fast red-green deck, can be really annoying. Peter maintained his composure, though, even though Sam swung into the Red Zone with the Centaur. Peter Unsummoned it yet again, as Sam asked, "That's three, isn't it?"

"That is my third," Peter replied, taking a quick look at his graveyard.

Sam just played the Centaur again and a Call of the Herd, reasoning that Peter must logically be out of Unsummons at this point. Peter finally found a forest on his next turn – his third land of the game!

On his next turn, Sam swung with the Elephant and the Centaur, forcing Peter to either block or take 8 damage, and with only 11 life to play with, he was more or less out of options. Peter blocked the Elephant with the Mongrel and discarded an Upheaval to make the Mongrel larger, then also discarded a Phantom Centaur of his own. He went to 6, and Sam played and flashed back two Calls of the Herd.

Peter found a fourth land, a forest, and flashed back the Roar of the Wurm from the beginning of the game. With two creatures in play, he looked confident that he would survive this next turn, if not necessarily take the lead in the game. Sam attacked with everything, even his elves, to bring Peter to 1, and flung his Barbarian Ring at Peter's head to deal the last point of damage.

Peter's first play in this second game was Careful Study, and he discarded another Careful Study and a Basking Rootwalla, paying the Rootwalla's madness cost. Sam replied with a sacrificed Wooded Foothills to find a forest, and then played a Llanowar Elf. Peter attacked with the Rootwalla, and pumped its power and toughness to put Sam down to 16 life.

Sam played another Foothills and sacrificed it for a mountain, going to 15 life. He Firebolted the Rootwalla, and swung with his Llanowar Elf. Peter just played a Careful Study and discarded a City of Brass and an Unsummon. He played another island and passed the turn.

Sam swung with the Llanowar Elf and then played a Karplusan Forest. He didn't play anything else, though, and just passed the turn. Peter played another land, tapped them all, and played a Ravenous Baloth. Sam's next play was a Threaten on the Baloth, and Peter didn't bother to read the Baloth and let the spell resolve instead. Sam then attacked, and when Peter couldn't do anything about it, Sam sacrificed the Baloth for four life. Quite the turnaround there!

Peter played a Phantom Centaur and passed the turn. Sam then played a Flaring Pain and Firebolted the Centaur to kill it. Peter, unperturbed, played a Ravenous Baloth and passed. Sam tapped four and played a Violent Eruption, killing the Baloth, and swung again with his mighty Elf. 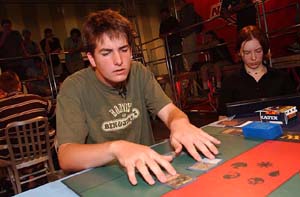 Peter played another Phantom Centaur and passed the turn to Sam, who drew his card and nodded his head. "One card?" he asked Peter. When Peter answered in the affirmative, Sam shook his head instead and played Call of the Herd, then flashed it back. Peter then played a Wonder and passed the turn back to Sam. Sam counted up his lands as he untapped them and flashed back Flaring Pain. He flashed back the Firebolt to kill the remaining Phantom Centaur, and Peter thought about it for a minute. "Yup," he said as he put the Centaur into the graveyard.

Sam swung with both his elephants and Peter blocked with his Wonder. Peter then played a City of Brass and the last card in his hand – a Roar of the Wurm! Sam, left with no other options, then attacked with all his creatures. Peter blocked an Elephant and went to 6 life. Post-combat, Sam played a Volcanic Hammer to kill the Wurm and then played a Llanowar Elf.

Peter flashed back the Roar of the Wurm on his turn and passed with one card in his hand. Sam played a Wild Mongrel and also passed. On his next turn, Sam sent all of his creatures into the Red Zone – two Elves, one Elephant, and the Wild Mongrel. Peter Unsummoned the Elephant, then blocked the Mongrel with the Wurm token. Sam flashed back the Firebolt to hit Peter for two, leaving him at two life, then was forced to pass the turn.

Peter played a Wild Mongrel and shook his head as he rearranged his lands. Sam simply drew and passed, a curious play, but Peter was more than willing to take another turn. He sent the Wurm into the Red Zone and passed the turn back. Sam drew again and passed, with three cards in his hand. At the end of Sam's turn, Peter discarded a Basking Rootwalla to his Mongrel.

Peter attacked with his Rootwalla, his Mongrel, and his Wurm token. He pumped up the Rootwalla, and discarded the last two cards in his hand to squeeze out exactly 13 points of damage – equal to Sam's life total. 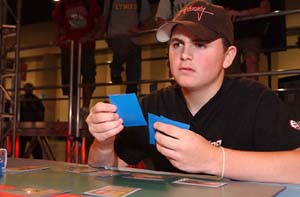 On his next turn, Peter cast a Quiet Speculation, getting Roar of the Wurm, Roar of the Wurm, and Deep Analysis. Sam swung with his Mongrel to take Peter to 15 life, then played a Krosan Reclamation at Peter and flashed it back. Peter was forced to reshuffle his Roars, his Deep Analysis, and his Wonder – a dramatic shift in the momentum of the game.

Sam attacked with the Mongrel again, bringing Peter to 13. Peter kept playing more lands – if he had had all that good stuff in his graveyard, things would be looking very grim for Sam right about now. Sam Firebolted Peter and kept attacking with the Wild Mongrel, bringing Peter down to 5 in very short order. He then flashed back the Firebolt to take Peter to 3 life. Peter managed to Unsummon the Mongrel at the end of Sam's turn, then cast a Deep Analysis on his own turn.

Sam played the Wild Mongrel again and passed the turn. Peter played a Phantom Centaur of his own, but it wasn't nearly enough. Sam asked, "You're at 3, right?" and flashed the Volcanic Hammer.