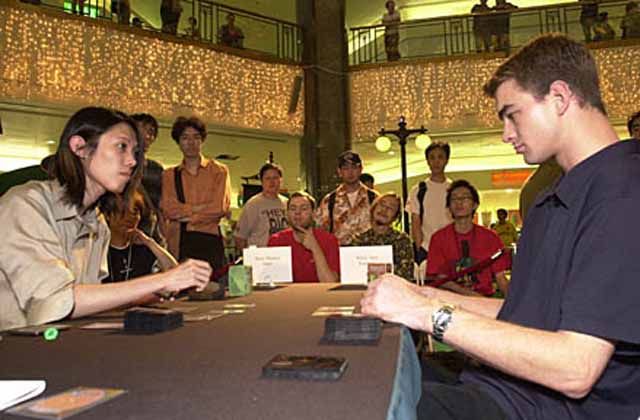 Sam Ward is from Perth, Australia and plays regularly at Empire Cards. He's qualified for the Pro Tour several times and actually attended once. In the semi-finals he and his Replenish deck took on a major challenge. Masaya Mori sat down across from him with an Angry Hermit deck. Mori has one of the highest Japanese Pro Tour finishes of all time with a 16th place last December at Pro Tour Chicago. And, oh by the way, he won this event last year and is trying to become the first person in Magic history to win two Continental Championships.

Ward elected to keep a six land draw in game one with Parallax Tide as his only spell. He thought about cashing it in, but he felt he couldn't afford to give up card advantage against Mori's mana disruption, especially when going first. Ward drew land on his first two draw phases and then Plow Under made him draw two of his lands a second time. Turn 4 Tangle Wire followed by two turns of Deranged Hermits finished game one off in a hurry. 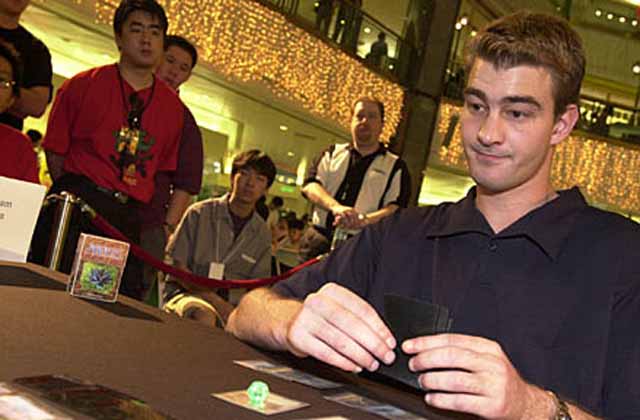 Ward felt a little better about his game two draw, especially when he played turn one Sheltering Prayers. The Prayers is a Prophecy card that has started showing up in a lot of sideboards as an anti-Port, anti-Plow Under card. Mori played a Llanowar Elf and a Priest of Titania. On his fourth turn Ward played a Parallax Wave and phased out both elves. During his end step, Mori cast Harmonic Convergence and Ward had two options, neither of which was very exciting. He could use his Seal of Cleansing to blow up one of his own enchantments (the Wave or the Prayers) or else he could just redraw those cards over the course of the next three turns. He decided not to respond to the Convergence. Mori got his elves back, untapped, and cast Plow Under. So much for Ward's amazing Prophecy tech.

Mori's spent a few moments staring at Ward's life total (of 17) and on his next turn Mori dropped Phyrexian Processor and paid 17 life, leaving 4 mana open to make a minion as soon as possible. Ward was able to use Frantic Search to slog through the land that was on tap of his library, and then he put that Parallax Wave back into play. The Wave phased out the first minion, but when Mori dropped a Tangle Wire, the game was all over but going through the motions. Tangle Wire prevented Ward from casting Seal of Cleansing before he ran out of fading counters on the wave. 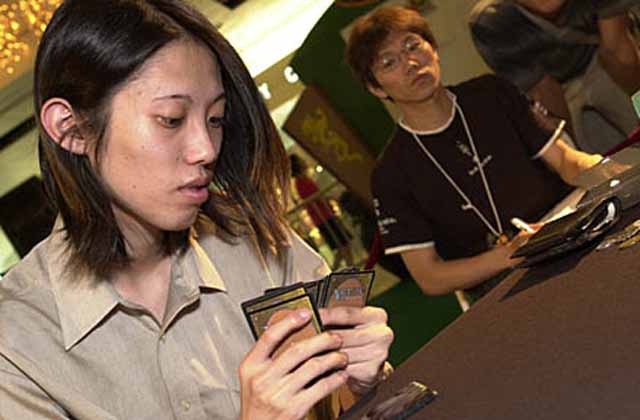 Going into game 3, Ward took out his Sheltering Prayers in favor of Seals of Removal. That allowed him to bounce a turn one Llanowar Elf. Two diamonds allowed him to build up a good mana base for the first time in the match, but his hand only had one "business card" - a lone Frantic Search. When frantic Search showed him nothing but land, things were looking grim. Ward did cancel out a Deranged hermit by top-decking a Parallax Wave, but Mori once again use Harmonic Convergence to pile useless enchantments on top of Ward's library and then Mori played Skyshroud Poacher. Two Ports and a Tangle Wire kept Ward completely locked up while Mori recruited several Hermits into his army.

Mori advanced to the finals with a 3-0 sweep. He has yet to lose a game today.