the quarterfinals behind us, it was now time to choose some national representatives for the finals. On one side of the bracket, it was two German players battling it out for the right to play in the finals, and on this side it was two competitors from Japan, Shuhei Nakamura and Takuya Osawa. At one point it looked like Japan was having a terrible event here in the Czech Republic, but in the end both of these players managed to make the final cut. They have played each other only once before, at Japanese nationals, where Osawa was able to take down the win. 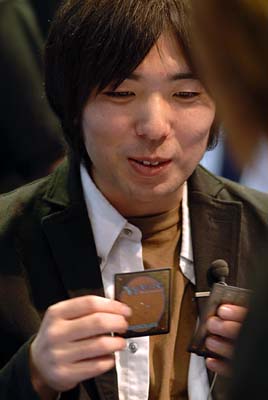 Nakamura looks for an answer.

For Game 1 it was Osawa on the play. He had to mulligan his first hand, but it looked like he had a great recovery with Aquastrand Spider off a Utopia Sprawl. Shuhei had a Tin Street Hooligan to play defense, and it even got to swing in when Osawa played just a land and said go, holding back his spider.

Nakamura also played only land, but when the spider came in it went down to a Lightning Helix, followed by Petrahydrox for Nakamura. Osawa had no play again, and dropped to 11 at the hands of Nakamura's beaters. Minister of Impediments made things look even worse, but a replicated Pyromatics took down the smaller creatures.

Again Osawa had no creature, just an additional Utopia Sprawl (getting him up to five mana) and now an Ordruun Commando was facing him down as well. Osawa got a real monster out next, playing Golgari Rotwurm, but he was down to just 7 life.

In came the Commando and Petrahydrox. Osawa thought quite a while on this one, then decided to block the Commando, going to 4. Nakamura increased the pressure again, adding a Conclave Equenaut to his board. Osawa had Exhumer Thrull to try and hold the fort for one more turn, but Nakamura was having none of that, lighting up the thrull with Brightflame and sending it to Game 2 in brutal fashion. Granted, these matches are best of five now that we're playing on the final day of the event, but still, that's a very crushing way to start your semifinal match against a deck everybody keeps saying is supposed to be so terrible.

For this one Nakamura appeared to debate removing the black to swap in the blue, something that had worked out quite nicely for him late in his quarterfinal match against Antonino De Rosa. In the end, the blue won out, perhaps signaling that Nakamura may even now think the black version of the deck was simply not the right call. Either way, it was with Islands, not Swamps, that he'd be entering battle this game. 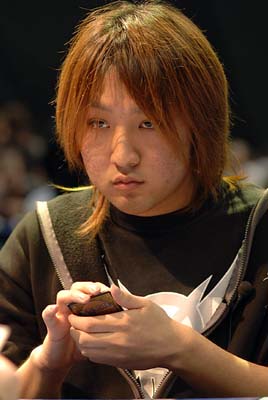 Osawa again chose to go first, but this time got to keep his opening seven. Nakamura fanned out his own starting hand, which immediately elicited a sharp intake of breath, and shortly after he was shuffling up for a better shot with six cards instead. Looking at the first four and clearly unhappy, he slowrolled the last two on himself, very quickly sending this one back too once he'd seen it. Down to just five, he was probably glad to be going second now. At last finding a workable hand of land and spells, he kept.

Osawa again opened with first turn Sprawl (set to red), but second turn, though he made a spider, he didn't have a second land. It came down on turn three however, along with a Simic Initiate. Meanwhile, Nakamura managed to get to three mana as well, casting a Simic Graftmage.

Still on just two forests, Osawa was only able to get out a War-Torch Goblin, slipping the spider by the Graftmage, which didn't want to tangle just yet. Nakamura, now on four lands and two colors, played a Minister of Impediments, making it 2/2 and looking like he might well be in it against his mana-light opponent. The mini-graftmage and goblin went to the bin, but then Nakamura had no play for his four mana, passing the turn with a hiss.

He wasn't totally helpless however, as the spider charged into the Minister, who got his beat on with the help of Leap of Fame, sending the spider to the graveyard. Cytoplast Root-Kin joined Osawa's team, pumping up the Initiate in the process and dropping Nakamura to 11, who had an Ordruun Commando for follow-up.

At this point Nakamura's side still felt like it was having trouble getting going, but Osawa was up to four mana now, adding a 3/3 Sporeback Troll to his team (with some help from the Root-Kin, who evidently had a spare counter). It looked like Osawa was getting some real offense going, but Nakamura found his first white mana at this point, which might get his deck rolling too.

He just passed the turn however, so Osawa went for an end-of-turn Pyromatics for two on the Commando, which was met with by a Lightning Helix to the Sporeback Troll. Streetbreaker Wurm put Nakamura way back on his heels, who had a Trumpeter now but was way behind, dropping to just four life.

After the attack Osawa spent quite a bit of time weighing his options, then decided to go with a main-phase Scatter the Seeds, making all three of them 2/2 with some graft help. Facing six creatures, Nakamura quickly checked his next card and just as quickly conceded.

This time Nakamura quickly switched back to the Swamps version of the deck, perhaps fearing that the blue option was too slow. Though Darkblast would clearly be useful against Osawa's quick beaters, that shouldn't have been any surprise to Nakamura, since decklists had been distributed after the quarterfinal rounds. (A standard procedure on the final day of Limited events, to prevent any players from getting unfair advantages over each other by finding out about each other's decks.) So, for whatever reason, Nakamura had decided the black version was the better way to go for now.

After Nakamura kept his opening hand, for Osawa the problem was another mulligan, which he decided very quickly as he threw away what clearly had been a very bad hand. Shuffling up yet again and looking very determined, he checked his six-card hand and decided to keep.

This time it was spider against Mourning Thrull, followed by the feared third-turn 3/3 Scab-Clan Mauler. Sporting just red and white mana so far, Nakamura had a vanilla Shrieking Grotesque as response. Stuck on three land, Osawa decided to hold back rather than offer the two for one, which seemed a little strange but perhaps he had something up his sleeve. Nakamura cast a Conclave Equenaut with the help of some Convoke action, and everything came clear when Osawa answered with Scatter the Seeds, untapped, pointed a Char at the Equenaut, and sent in with the team to drop his opponent to 13.

Nakamura brought a Commando for defense and sent with his fliers. Osawa untapped, still stuck on three lands, and sent the team of five beaters. Commando took out a token with the help of a Plains to stay alive, and Darkblast handled another token, making it 10-8 Osawa after the crackback from Nakamura's fliers. Minister of Impediments joined the defensive effort in this blistering game, and this time it was just the Scab-Clan coming over. The Commando stepped in front, and it turned out to just be an even trade.

In came the Shrieking Grotesque, but the Minister of Tap went down to a Pyromatics, letting Osawa's final token plus spider get in, making it Osawa 8, Nakamura 5. Now up to 5 mana, Osawa had a very impressive-looking Golgari Rotwurm as well. Down to just the gargoyle and the thrull, this time the Shrieker stayed back while the thrull gained a precious point of life for its master.

Osawa played a Simic Initiate, popped it to pump a new Scrapper with haste, and suddenly over came an avalanche of 12 damage. Nakamura was forced into chump mode and it was all over a turn later when Nakamura drew his next card face up and quickly sent it to Game 4.

This time both players had satisfactory starters and easily got to five mana with all three colors available. Nakamura got to be the aggressor this time, opening with a Squealing Devil, answered by the inevitable turn two spider from Osawa. Next was Freewind Equenaut, which showed up in time to watch the Squealing Goblin catch fire with some help from Pyromatics on Osawa's turn.

For turn four it was Petrahydrox vs. Mortipede, which went down to Darkblast. Nakamura sent in with both his creatures, making it Osawa 11, Nakamura 18 and following up with a Sabertooth Alley Cat, which had Osawa looking way behind on the board.

Trying to get back into the game, Osawa went for Sporeback Troll, making it a 3/3 with some graft help. Darkblast came back on the other side of the table, which finished off the Troll when it was forced to block the Freewind Equenaut to slow the bleeding, making it just the 1/1 spider left on Osawa's side. That last little beater swung bravely in, yielding a 5/6 Ghor-Clan Savage for its master! 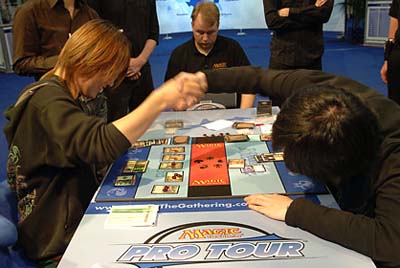 Shuhei congratulates his countryman on making the finals of Pro Tour-Prague.

Nakamura got back Darkblast yet again, sent in with his unblockable cat, and said go. After taking the walloping from the Ghor-Clan Savage, the game stood at Nakamura 12, Osawa 4. Osawa wasn't done though, laying out a Seal of Doom and passing the turn.

At this point, the true synergy of graft and token generation came online. Nakamura went for Darkblast on the 1/1 spider, but Osawa responded with a devastating Scatter the Seeds, making three guys, picking up a +1/+1 counter off the doomed spider in the process.

Osawa added another spider to his team on his own turn and that was it. Out of seemingly nowhere on a board that at one point was just a single 1/1 creature, Osawa had smashed home the win!