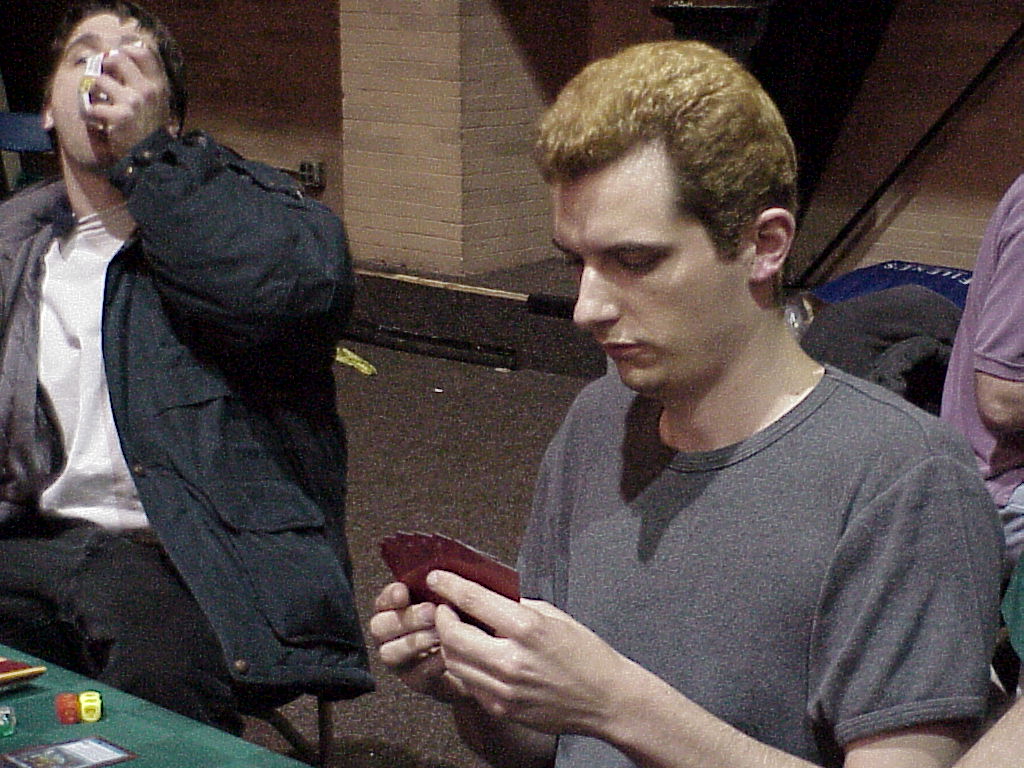 According to Aaron Forsythe, "Old people are mizing Magic." Coming on the heels of 35-year old Mike Pustilnik's win at Pro Tour Los Angeles, the semi-finalists are 28, 28, 32, and 50 years old! (That's an average age of 34.5.) The two "kids" squared off in one semi-final where Mindripper editor and Pro Tour New York 2000 co-champion Scott Johns took on Grand Prix Dallas champion Matt Vienneau. Johns - a Top 8 fixture in the very early days of the Pro Tour is actually the youngest player left.

Vienneau Prohibited a Hate Weaver to start game 1 and then went into pure card advantage mode. He Probed with kicker and then dropped Benalish Heralds. All Johns could muster was a Lava Zombie with Scavenged Weaponry on it that fairly screamed "bounce me!" Matt didn't have a bounce spell, but Metathran Zombie held it off just fine once Matt remembered that it could regenerate. He took enough damage early, though, that he felt the need to Spite a Backlash since he was down to 8. Scott fully acknowledged that he had some janky cards in his deck, but he's quick to point out that he also had some good ones. Deck construction was really tough as he was forced to figure out how to win with his assorted red, black, and blue cards. He eventually decided he had to "sacrifice a goat to Pustilnik" and just assume he'd just draw a land of each of his colors in each game. Vienneau had a white, black, blue deck with better mana and card quality that seemed comparable.

With his Scavenged Zombie stuck staring across the battlefield at a regenerator, Johns took his offense to the air with Urborg Drake and Cavern Harpy. Matt answered with Stormscape Master, but he just didn't have enough mana to take full advantage of all of his cards since he was under so much pressure from fliers. Johns Demised the Master and just kept attacking. When he looked up, Vienneau was scooping his cards and moving on to game 2.

The hits just kept on coming out of Scott's deck in game 2. He enchanted his Hate Weaver with Traveler's Cloak on turn 3 after discarding Viashino Grappler and Sapphire Leech to Vienneau's Bog Down. When Vienneau played Probe (without kicker) to look for more land, he wound up discarding Death Bomb and Spite/Malice. "That's the problem with having all good cards in your deck," joked Johns, "You can go ahead and make me discard all you want, I wouldn't care." Somehow that Cloaked up Weaver actually looked good, putting Vienneau under enough life pressure that he couldn't afford to kick his Phyrexian Scuta. The Phyrexian Hill Giant traded blows with the unblockable Weaver until Johns played a Vodalian Serpent. Vienneau played Fact or Fiction and slowly revealed five consecutive lands, with Johns cheering each one of them. Vienneau complained that "my deck is taunting me" when he drew Stalking Assassin with just 2 life points left. Hate Weaver went all the way! Johns apologized as he shook Vienneau's hand.