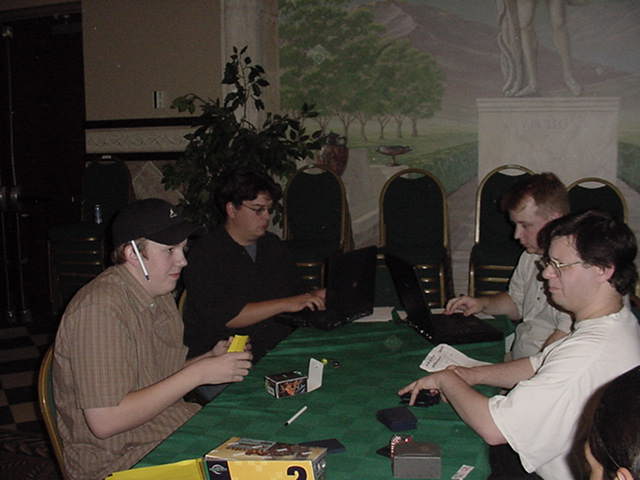 All day long, Green/Black decks have dominated the scene. Both Fitzgerald and Pustilnik (MikeyP) played through G/B/x decks, and are now facing off in a true mirror match. Both are running modified versions of Sol Malka's "The Rock and his Millions", but with some variances. MikeyP has access to Recurring Nightmare, a card judged too slow by Fitzgerald. Fitzgerald seemed nervous about this match-up, MikeyP had defeated him previously during the swiss rounds.

A turn 2 Phyrexian Furnace from Pustilnik would put a quick stop to any graveyard recursion from Fitzgerald, at least until he can find a Pernicious Deed. The longer the game goes on the more it shifts in favor of MikeyP. His reanimation, via Recurring Nightmare, can generate overwhelming card advantage if left unchecked. After some quick deck manipulation from both sides, Spiritmongers come crashing down to grunt and snarl at each other. MikeyP takes a decided advantage by bringing a second one to the party and suddenly Fitzgerald is left scrambling for an answer. Just when he seems to have stabilized the board, Mr. Pustilnik decides to bring a third down to make it a very crowded table with a whole lot of beef on it. Fitzgerald stalled out the big monsters for a while, using Yavimaya Elders as the ideal chump blocker, but he was getting overwhelmed. Fitzgerald had a plan through, all of those lovely chump blockers had managed to somewhat fill his graveyard up, despite the Furnace from Pustilnik, so he found the black Wrath of God, Living Death. This ended up with both men having a single Spike Feeder staring down each other, much less threatening than the three Spiritmongers salivating for his entrails. After some shifting of counters, Fitzgerald's Bird of Paradise suddenly became much larger and took the fight to the air. Pustilnik found his own Death to bring back the Mongers, but with no extra black mana, Fitzgerald Deeded them away before it got out of hand again. He then proceeded to rip 3 consecutive Treetop Villages off the top and another Pernicious Deed to sweep the board clear for lethal damage. 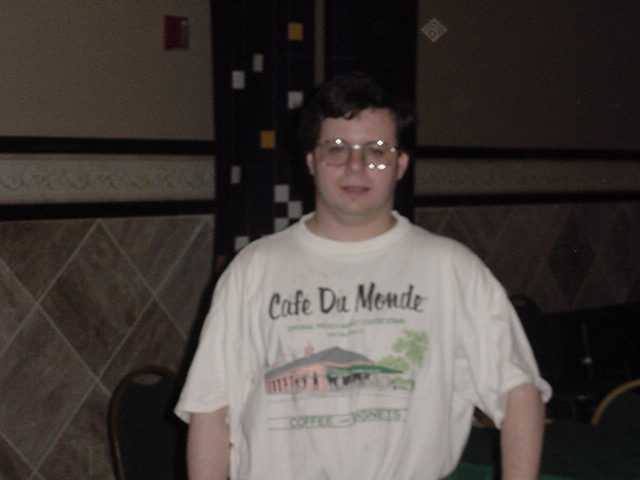 Once again both players spent the first few turns establishing their mana base and playing out a variety of small utility creatures and artifacts. A Deed from Pustilnik swept out all of the early creatures, but due to a pair of Yavimaya Elders, it netted Fitzgerald five cards. Spiritmonger came out quickly for Fitzgerald, and Pustilnik was left scrambling for an answer, which he found in the Phyrexian Plaguelord, if he could find some creatures to back him up. The Plaguelord is holding court over a very empty kingdom. Pustilnik is forced to chump with the lord before long, but casts Living Death to turn the tide around. While not the most impressive Living Death ever cast, it does stabilize Pustilnik's board for a couple of turns and gives him time to find his own Monger. Fitzgerald matches it, and another staring fest ensues between the big beasts. This goes on for several turns until Fitzgerald is able to find enough Diabolic Edicts to finally do away with the giant and swing back with his own. That last for one turn as Pustilnik promptly deposits another onto the field and a Spike Feeder ready and waiting to take one for the team if needs be. Another pair of Mongers comes down for each, and the posing contest continues, Pustilnik finally finds what he'd been looking for, his own Edicts. With the path clear the army of beef came barreling down to crush some heads.

So with an hour and forty-seven minutes under their belts, they shuffled up for game three. If this had been a timed match it would have gone to Fitzgerald as the first game ended just before regulation time. 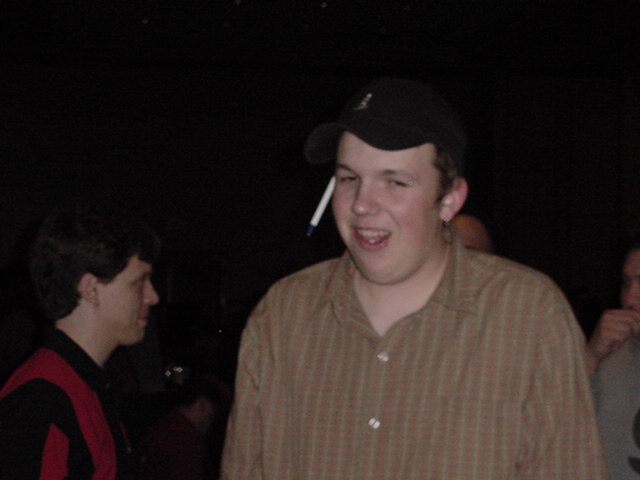 As had started becoming apparent over the first couple of games the mana advantage is central in this match-up, with both men seeming to value their Yavimaya Elders and Dustbowls over most other cards. In this one, Pustilnik had a pair of Elders, while Fitzgerald's Dustbowl chewed up most his early mana. Both are struggling to achieve board dominance as their lack of evasion creatures and constant life gaining (via Spike Feeders) means that the damage really needs to be applied heavily over the course of two or three turns to secure the game. Both men went back and forth, Deeding to sweep out the board and hoping to find their all-important Spiritmonger. Pustilnik had not found a Spike Feeder yet, so the damage from the few times Fitzgerald had slipped through was starting to hurt a lot. Both men were actually on a slow bleed with slightly over half their life whittled away. Pustilnik finally got a Spiritmonger, but at the same time Fitzgerald drew into his Vampiric Tutor and unsurprisingly, his own Monger. However due to the sheer volume of Elders Pustilnik had drawn, and through them mana, he was able to regenerate his own Spiritmonger while taking out Fitzgerald. A Duress revealed Fitzgerald to have nothing in hand and it appeared as if it was all over, but with a knock on his deck, Sean ripped an answer in the form of Living Death. Unfortunately, due to Pustlinik's Phyrexian Furnace, Fitzgerald only brought back small utility creatures, while the good Dr. Pustilnik got a Phyrexian Plaguelord and a host of cronies to back him up. A turn later Spiritmonger number two showed up for MikeyP and this time Fitzgerald could not find an answer.

After two and a half grueling hours they shook hands with a smile.