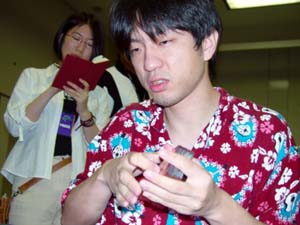 a win here, either Kamei or Fujita will be guaranteed a spot on the Japanese National Team, and will go on to the finals, where the National Championship will be up for grabs. The loser will still be able to make the team via a third/fourth place match. This match should be particularly interesting, since Kamei is playing blue-white control, and Fujita is running red-green Goblins. Kamei has three copies of Circle of Protection: Red in his sideboard, which are far less powerful due to the fact that Fujita is packing enchantment removal. Beyond that, Kamei has the tried and true recipe of board clearing spells and efficient lifegain that can nullify aggressive decks like Fujita's. Fujita will need to get fast starts, and after sideboarding will need to have all the right answers to Damping Matrix and Circle of Protection: Red.

Fujita used Skirk Prospector to accelerate into a second turn Warchief, and player another Warchief on turn three. Fujita added a little more pressure with Sparksmith, and attacked for five. Kamei cycled Eternal Dragon, untapped, and cast Wrath of God to clear the board. Fujita came right back with Clickslither, and had Siege Gang Commander on turn five. Kamei cycled Decree of Justice, looking for a Mana Leak, but didn't get it. Once the Commander came into play, it provided more than enough fuel to make the Clickslither deadly.

Fujita started with a Goblin Sledder, followed by Skullclamp on turn two, which was Mana Leaked. Kamei dropped a Damping Matrix onto the table, rendering much of Fujita's strategy useless. He played a second, and Viridian Shaman destroyed the first one. Wrath of God cleared the board, and Fujita had another Shaman to take care of the Matrix problem. Kamei played Circle of Protection: Red, and Fujita played a Warchief. The Shaman took the Skullclamp, and attacked to deal three damage. Siege Gang Commander came out a turn later, and Fujita's red creatures were managing to push through for some damage. After the attack, Skullclamp went through a Goblin token to provide more cards. Kamei cycled Eternal Dragon, and cast Akroma's Vengeance to sweep away Fujita's whole board. He did lose the Circle in the process, however, and Fujita played a new Warchief to deal two damage. When he played a pair of Goblin Goons on the following turn, Kamei conceded. 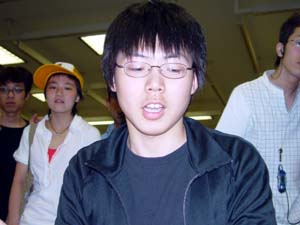 Fujita had Skirk Prospector and Goblin Sledder in the first two turns, and Kamei played Damping Matrix. Fujita mana burned to keep Pulse math in his favor, and used Viridian Shaman to destroy the Matrix. Kamei cast Wrath of God, and Fujita came back with a Warchief. He followed up with a Skullclamp, and Goblin Sharpshooter a turn later was Mana Leaked. The Warchief took the Skullclamp, and attacked for three. Fujita committed a bit more to the board on the next turn with a second Warchief, and attacked for five. Wrath of God took out the creatures, and Fujita got two cards. Another Warchief resolved, and took the Skullclamp to deal three damage. A turn later, Fujita attacked and Kamei cycled a Decree to make five blockers. It didn't matter, as Fujita played Siege Gang Commander and a Prospector to win the game and the match.