Semifinals: Slave to the Rave

Fujita is a legend of Japanese Magic. He's the current Japanese National Champion and is widely regarded as the best Constructed deckbuilder in the world, but for someone with "legend" status, you would think he would have a few more Pro Tour Top 8 appearances. In fact, the last appearance of the name Fujita on the list comes from Tsuyoshi's cousin Osamu - the Resident Genius himself hasn't been to a Top 8 since he broke Japan's curse at Pro Tour-Tokyo back in 2001. All of that changed this weekend and did so in unexpected style, as Fujita showed that his cousin isn't the only player with drafting skills in the family. 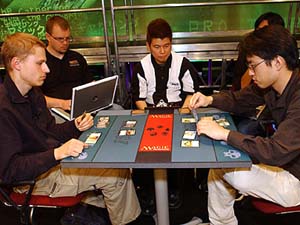 Malin and Fujita survived tough matches to make it to the semifinals.

Sitting across from the Japanese master is 22-year-old Finnish student Antti Malin. Prior to this weekend, Malin had posted a string of solid finishes at Pro Tours, but never put in a strong enough performance to earn high regard among his peers. In order to reach the semifinals this weekend, Malin had to take out countryman Tomi Walamies in four very well-played games while Fujita mounted an incredible comeback against Arnost Zidek, clawing his way back from an 0-2 deficit to take the match.

Malin won the die roll and chose to play first, dropping an O-Naginata onto the table on turn one. He immediately hit his combo on turn two with Raving Oni-Slave, but Fujita had a Consuming Vortex to bounce it back to his hand on the next attack. Malin recast the Oni, having done 9 points of damage to himself in the first four turns of the game, while Fujita built his board position, casting Soratami Mindsweeper and Kami of Twisted Reflection.

"Oh no…" coupled with a grim shake of his head was Malin's reaction when Fujita cast Phantom Wings on his Slave, taking the damage dealt by his own black two-drop to 12 and dropping his life to 7. Shockingly enough, Malin recast it once again on his own turn dropping himself to 4 and then dying when Fujita attacked with the Mindsweeper and pumped it with Inner Calm, Outer Strength. 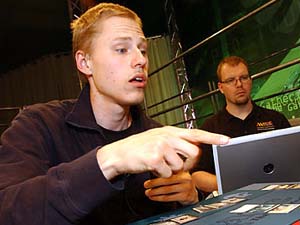 Malin was done in by his own Raving Oni-Slave.

It seems a bit easier to kill people in Magic when they only start at 8 (or even 5) life, though Malin's deck failed to cough up a single Plains to go along with the five white cards left in his hand, leaving him few options.

For Game 2, Malin sided out Blessing of Leeches and a Skullsnatcher leaving Stir the Grave and Skullmane Baku in their place.

Malin kept his hand again in the second game, smiling at a set of land that included a Plains this time, though it lacked any plays before turn four. That play was a big one, however, as Yukora, the Prisoner stepped into play to cause Fujita headaches. On Fujita's side of the board, he was busy building a small army, casting Child of Thorns, Moonfolk Illusionist, and Sakura-Tribe Springcaller on his turns.

Yukora attacked, and Malin added a demon brother to his side in Gutwrencher Oni, but that play immediately went awry when Fujita bounced the Legendary Demon Spirit. On turn six it was Fujita's six creatures against a lonely Yukora, and Malin's 12 life started to look uncomfortable. Another attack by Fujita's flyers dropped Malin to 9. Two more attacks and another Inner Calm, Outer Strength on a Mindsweeper put Fujita up two games to none. 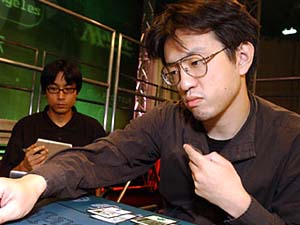 Swing for the win!

Malin kept a two Swamp, five-card hand and cast the first spell of the game on turn three with Hired Muscle. Fujita matched that on his own turn three with Kami of Twisted Reflection and they were off. Waking Nightmare from Malin on turn four stripped two lands from Fujita's hand and added a counter to the Muscle, but Malin missed his land drop and now he had a stack of white cards and expensive black creatures in his hand with no where to go.

"Go," began to sound like a curse every turn that Malin drew a card and whiffed on land as he dropped further and further behind and watched Fujita snatch away his life on the return attacks.

Rend Spirit on the last turn was too late to provide any help at all and Fujita took the match, three very quick games to zero.

"I thought about mulliganning that hand, but I figured there were plenty of Plains in my deck. I guess my luck had to run out at some point."