Gabriel Nassif played Martyr Proclamation in the Top 8 of Worlds in Paris in 2006. While his take on Five-Color Control isn’t quite as glacial as that white monstrosity, his Conflux tech, Wall of Reverence, means that his games can go long—especially in an untimed, best-of-five Top 8 match. The trick would be to see whether his opponent Akimasa Yamamoto’s Red-White Reveillark deck could close the distance before Nassif’s life gain and long-term card advantage could get out of hand. 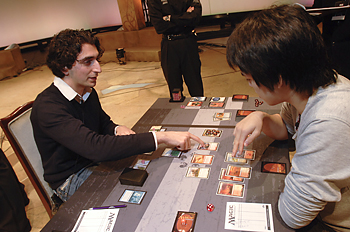 Gabriel Nassif and Akimasa Yamamoto settle in for what could be a very long match.Yamamoto started the game off with a Windbrisk Heights and quickly laid out two Knights of the White Orchid off of a Battlefield Forge. His subsequent attack tied the game at 18 in his favor as Yamamoto laid a second copy of the 2/2 Knight off the painland. Nassif had a surprise Plumeveil on turn three to intercept one of the Knights, putting the life totals at 18-16. He was displeased when post-combat Ajani Vengeant arrived for the Japanese player, however. Ajani played the role of mana denial, keeping a Vivid land tapped the next few turns as Yamamoto added a Mogg Fanatic and a Mind Stone to his side.

Time was running out for Nassif as Ajani counted up to six loyalty counters and the threat of a one-sided Armageddon loomed. Nassif played out a Wall of Reverence, an excellent anti-aggression tool now at the disposal of the Five-Color Control archetype with the release of Conflux, going up to 20 again using the 4-power of his Plumeveil. Now facing a near-impenetrable fortress of defenders, Yamamoto thought long and hard on his game plan. Ajani ticked up to seven, “Geddon you” right around the corner, and Yamamoto played the deck’s signature Reveillark and ended with a Path to Exile on the lifegaining Wall.

Nassif untapped and stopped himself from playing another land into the seven-counter Ajani. He opted to play Volcanic Fallout first and redirected its 2 damage from Yamamoto to the planeswalker, bringing Ajani down to a less frightening 5 counters. Fanatic pinged Nassif on the way out, leaving the life totals at 17 to 18.

Yamamoto took a point of pain to play and level Figure of Destiny up to 4/4 proportions, but Nassif was unworried and played Cruel Ultimatum. Yamamoto sacrificed his Reveillark to return both of his Knights of the White Orchid, and double Plains-fetched to even the land count. The life totals stood at 22 to 12.

Unfortunately for Nassif, Yamamoto was able to power up his board with a Siege-Gang Commander while the French competitor was tapped out. With a swarm of creatures and Ajani again at ultimate level, it did not appear that Nassif’s high life total would get him out of this. He untapped, evoked two Mulldrifters looking for solutions, but when none showed, he scooped to the ‘Lark player.

Nassif quickly kept and led with a Vivid land and Yamamoto replied with a turn 1 Figure of Destiny, the two cards nearly defining the two disparate archetypes. Rather than begin sending his Figure along toward its destiny, Yamamoto attacked for 1 and played a Mind Stone to accelerate himself past Nassif.

The next time Figure attacked, however, Yamamoto did pump it up to 2/2, putting the life totals at 20 Yamamoto to 17 Nassif. Burrenton Forge-Tender joined the team while Nassif did what control decks do and drew cards using an Esper Charm.

Wall of Reverence came down to hold the fort for Gabriel, bringing him back to 18, but Akimasa took his chance and played out Ajani Vengeant once again. A series of turns where Gabriel tapped out looking for lands by evoking Mulldrifters left him facing Ajani Vengeant, Ranger of Eos, and a Flamekin Harbinger (with a Reveillark waiting on top and a Figure in hand). Reveillark came down for Yamamoto with no resistance from a spent Nassif.

Yamamoto had finally assembled a team that could start punching through the Wall of Reverence, and served with Reveillark, Ranger of Eos and a 2/2 Figure of Destiny. Nassif took the beats down to 14. On Yamamoto’s end step, Nassif’s Cryptic Command played Repulse to return Ajani Vengeant to the Japanese’s hand.

It turned out Nassif’s previously discarded Broodmate Dragon was part of a set of quadruplets as a second copy of the powerful Jund monster hit the table. Nassif used his now significantly powered flying force to go back up to 18. Yamamoto had no fear, attacking his Ranger of Eos, Flamekin Harbinger and now 4/4 Figure of Desinty into the Dragon Duo and revealing a Path to Exile from his early game hideaway. The remaining Dragon token ate the Ranger and the Wall ate the Harbinger, but a replayed Ajani Vengeant brought lightning down on the Dragon token to put Nassif back to zero Dragons. The score was 23 Yamamoto to 14 Nassif. 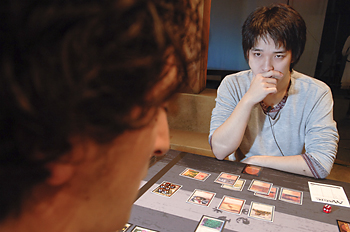 The thinker.Nassif added a second Wall of Reverence, and Yamamoto’s Ajani started the slow climb to Armageddon once more. When Yamamoto added a second Figure and attempted to level it to 4/4, Nassif played two Volcanic Fallouts. One removed a Burrenton Forge-Tender, and the other removed Ajani and the interrupted Figure of Destiny.

Yamamoto tried to rebuild a bit with a Spectral Procession. Nassif paid for a full-cost Mulldrifter, but before his double Walls could gain him a chunk of life, Yamamoto took care of one of them with Path to Exile.

When the Japanese pro attacked in with Reveillark and Figure of Destiny, his French opponent had Celestial Purge for the Kithkin. But the Purge’s effect was nothing compared to that of the Cruel Ultimatum he cast on his own turn. The card advantage for Nassif seemed overwhelming ... until Yamamoto discarded a Siege-Gang Commander and sacrificed his Reveillark to get it back along with a Harbinger for another Reveillark.

Nassif followed the 11-for-1 with an important 2-for-1 on Yamamoto’s draw step: Esper Charm. Yamamoto was forced to discard a Figure of Destiny and a Reveillark. Nassif seemed relatively safe at 20 life, but when everybody but the Commander attacked, it suddenly wasn’t so clear.

Nassif survived the attack and replayed the Ultimatum-returned Broodmate Dragon, however, and Yamamoto used up two Goblin tokens to kill the Dragon token before the Wall could gain Nassif more life. It turns out when their Commander is leading them, Goblins have no problem devouring the Jund Dragons, rather than the usual other way around.

Nassif used a Cryptic Command to bounce his Broodmate Dragon when the other two Goblins were sacrified to blast it. Yamamoto tried to fill the table with Spirit tokens from his second and third Spectral Processions, but Nassif had quite a few counterspells at the ready and the Dragons took it home.

The second game had taken most of an hour, and the two players adjourned for a quick break before getting back into the fray.

Yamamoto led off with a mulligan into Plains and Reflecting Pool, an inauspicious start. His turn-three Figure of Destiny was a bit late to the party, but luckily no one else had showed yet. The Figure went to go make friends on Nassif’s side of the table, bashing him down to 16, but the party ended with Nassif’s Terror the next turn. 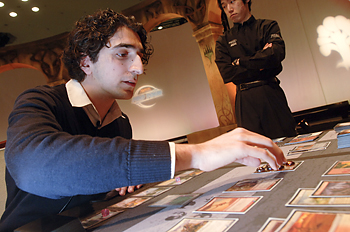 Gab Nassif is the ultimate mage, or at least the Ultimatum one.Yamamoto played a Ranger of Eos right into Nassif’s Broken Ambitions, leaving the table clear. That didn’t last for very long, as Nassif was unable to stop Reveillark from hitting Yamamoto’s side the next turn.

Fortunately for Nassif, the power of Grixis allowed his Cruel Ultimatum to partially remedy the situation. He traded the Reveillark in play for two Figures from the graveyard and ripped double Elspeth, Knight-Errant and a Spectral Procession from Yamamoto’s hand.

The lifegain of the Ultimatum was erased as Yamamoto quickly upgraded his Figure team to 2/2 and 4/4, and those twins brought Nassif down to 15 before the Wrath of God was visited upon them. Yamamoto, unfazed, played Spectral Procession for three more miniature flying beaters.

Nassif was ready for him, playing out a Mulldrifter to block and keep the cards flowing. Ajani Vengeant was Yamamoto’s plan to turn the balance of power, but Nassif was quite happy to break his ambitions on that count. The life totals stood at 15-13 in favor of Nassif after Mulldrifter entered combat with Yamamoto’s dome. Broodmate Dragon arrived to hold the fort against the token swarm across the way.

When Yamamoto played out a Ranger of Eos to reload, Nassif stopped him and thought. He eventually decided to counter it with another Broken Ambitions. Leaving his revealed Windbrisk Heights on top, Yamamoto took care of half the dragon threat using Path to Exile. Still, one half of the brood plus the Drifter meant Yamamoto’s life total dropped to 7 on the next attack.

Nassif thought for even longer when Yamamoto attempted a Siege-Gang Commander, doing careful arithmetic to determine whether he could race with his flying force against the Goblin horde. He let it resolve, holding his remaining Broken Ambitions in case of emergency. The Commander took a Celestial Purge end step, but the subsequent few attacks brought the game to 10-1 in favor of Nassif. Knowing he could win the race as long as nothing unexpected happened, the French player played out a Pithing Needle naming Windbrisk Heights. That narrowed Yamamoto’s options to the top of his deck.

Yamamoto drew well, finding a Banefire for the Dragon token, but another Mulldrifter for Nassif meant Yamamoto’s Spirit tokens entered chump mode. No further outs were forthcoming, and the pair took it to the fourth game. 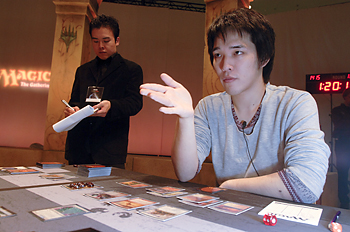 All right, let’s see it.Yamamoto took a good long think before electing to send back his seven for a more respectable six. He led once again with a one-drop—this time, a Flamekin Harbinger with, curiously, no Elemental search. The next few turns passed with no action from either side, but when Yamamoto hit Nassif down to 17, he played a Ranger of Eos. Nassif, with two mana up, stopped it with Remove Soul.

Still, the Harbinger beats kept coming across, putting Nassif down to 14 before Nassif’s sixth turn brought out the one-card tag team of Broodmate Dragon. Unfortunately, this time Yamamoto could not take great advantage of his Five-Color opponent tapping out, and only added a Burrenton Forge-Tender and a Knight of the White Orchid to the table.

Nassif removed them all with Infest.

Still in it, though hurting from mana flood, Yamamoto attempted an Elspeth, Knight-Errant. Nassif considered but allowed it to resolve through his countermagic. Dragons bashed Yamamoto from 11 to 3. Searching desperately for answers, Yamamoto tried a Ranger of Eos, but Cryptic Command stopped that plan in its tracks. Facing down 8 power’s worth of Dragon, Yamamoto knew he had no more outs.

He decided to end it on his own terms, jokingly Banefiring himself. For a split second, Nassif might have considered that X was less than 5 and he still had mana up for a Broken Ambitions. Rather than crush his opponent to death with Dragons, however, Nassif took the classy way out and shook Yamamoto’s hand.