Semifinals: So Many Soldiers

While many people expected the lads from ChannelFireball to crush this Top 8 as easily as they did the swiss rounds of this tournament, Great Britain's Richard Bland and David Caplan from Canada both bested their Tempered Steel opponents in the quarter finals.

"How'd you finish in Standard?" Caplan asked Bland, as they waited to start.

Bland won the right to play first by finishing sixth in the Swiss to Caplan's seventh, and had an Oblivion Ring for Caplan's first play: a Shrine of Burning Rage. Bland followed that up with a Hero of Bladehold, forcing Caplan to spend both a Gut Shot and a Volt Charge on it. Bland then played Elspeth Tirel, complete with her usual entourage of soldiers, but Caplan took out the planeswalker and one of the Soldiers with an Arc Trail. Bland summoned another Hero, and Caplan swiped up his cards.

"That was a lot of lands for a red deck," Caplan bemoaned, as he rifled through his sideboard. 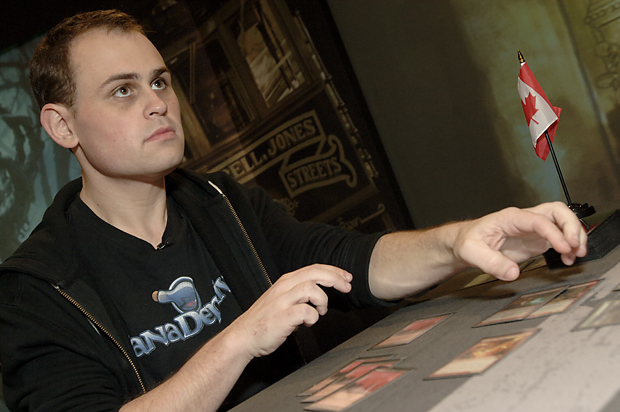 David Caplan's post-board plan: take a lot of damage and have fewer creatures than the opponent. Wait, what?

Caplan had detailed to us earlier that his chances in this match were slim to even less. He planned to remove most of his one-drop creatures and try to burn Bland out, keeping his life total low with Dismember to keep Bland from being able to utilize Timely Reinforcements. It might be a sketchy plan, but it was at least a plan.

Sideboarding went as follows for Bland:

Caplan started the second game with a Stromkirk Noble, but Bland had a Gut Shot for that and an Avacyn's Pilgrim. The Pilgrim attacked for 1, and was joined by a Mortarpod. Caplan slammed down a Manic Vandal with a grin, destroying the Pod. Bland summoned a Hero of Bladehold. Caplan called Koth of the Hammer to his side, untapping a Mountain and using it to Dismember the Hero. The life totals now 14 for Caplan, and 18 for Bland.

Bland exiled Koth of the Hammer with a Celestial Purge, but fell to 14 when Caplan summoned a Chandra's Phoenix and attacked with it alongside his Vandal. Bland gave his turn some thought. He had five land, one of which was a Gavony Township, and his Pilgrim. Finally, he tried for a Timely Reinforcements. No Koth of the Hammers allowed on this table.

"We're both at 14?" Caplan confirmed, before Galvanic Blasting his Vandal and sending the Reinforcements on their way.

Bland again summoned Elspeth and her Soldiers, but the Phoenix flew over to take out the Planeswalker. Bland shrugged, and Townshipped his team, attacking Caplan down to 4. The Canadian drew his card, and scooped.

Caplan threw away his hand for six more, while Bland kept his seven. A Stromkirk Noble on turn two for Caplan was quickly dwarfed by a Blade Splicer from Bland, so he instead went over the top again with a Chandra's Phoenix.

Bland dropped a Hero of Bladehold into play. Unable to kill the Hero, Caplan Arc Trailed the Splicer and the Pilgrim, and attacked with the Phoenix, enabling bloodthirst for a Stormblood Berserker. Bland attacked with the Hero. The Noble and Berserker teamed up to take it down, but Caplan took a fair amount of damage in the process. Bland followed combat by commissioning more Soldiers from an Elspeth Tirel. The Phoenix knocked out Elspeth, but when Bland played a second Hero of Bladehold on his turn, Caplan just laughed and threw out the handshake. Caplan knew his chances were slim, as he congratulates Bland on his semifinal win.