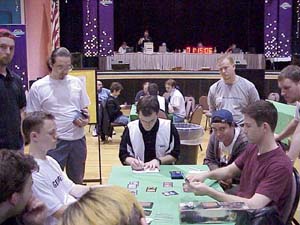 Sol Malka vs. Koby KennisonSol Malka, adored by magic players across the nation played in his first career Grand Prix top eight, and advanced to his first career top four this weekend. The creator of the popular Rock and His Millions deck was playing an aggressive Black Red deck that featured Cabal Torturer, Pardic Collaborator, Faceless Butcher, Barbarian Outcast (multiple copies) and other utility black and red creatures. Patriarch's Desire, Afflict, Morbid Hunger, and multiple copies of Unhinge rounded out the deck. Koby Kennison was running a Black Red Green deck. Grotesque Hybrid, Krosan Constrictor, Duck Imp, and Puppeteer were some of the creatures that his deck featured, while he also used Patriarch's Desire, and the broken Crippling Fatigue to hold off creature based assaults.

Tensions mounted as cards were flopped, each of these matches are in essence ante matches, and the players wanted to go home with as much cash as possible. They rolled the dice, and Malka came out the winner. Choosing to draw first, they drew seven, looked at them, and started play.

Kennison blazed out of the gates with a turn three Puppeteer, which was matched by Malka's Barbarian Lunatic. After playing a Patriarch's Desire on the Lunatic, the Puppeteer took the unusual job as attacker and swung for one. Pardic Collaborator signed up for Malka's team, and he passed turn. The Puppeteer hung back on defense and was joined by a Grotesque Hybrid. Faceless Butcher came down, and removed the Hybrid from the game, and the Collaborator got put in lock down when an attack phase was announced. Centaur Chieftain swung with a quickness, and Malka attempted to empty Koby's hand with Mesmeric Fiend and Unhinge in the same turn. Morbid Hunger took down the Puppeteer on the next turn, and Unhinge was abused for the second turn. Anarchist came down for Malka, recovered an Unhinge, and the game was over. No jokes, it lasted all of ten minutes. 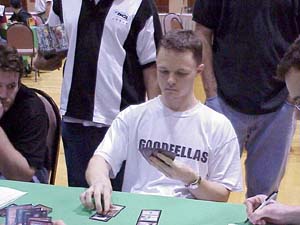 Koby Kennison It appeared as if Koby simply ran out of gas. He was mana flooded for a good portion of the game, and he drew at most, three threats out of his deck. During the side boarding break, a worn swamp was replaced in Kennison's deck, and it was on to the second game in the best of three match. Koby wanted to get out of the gates, and opted to play first. No Mulligans were taken.

A second turn Barbarian Outcast was the first threat on the table. Dusk Imp came down for Koby, and was the first victim when Sol afflicted it. Centaur Chieftain came down early again for Koby, and Malka was showing signs of mana issues. A turn four unhinge was used to cycle the deck, and a Mesmeric Fiend was drawn in place of some real needed land. The nasty Centaur swung again for Koby, and the Grotesque Hybrid joined in the fun during the second main. The draw step offered no reprieve for Malka, and the mesmeric fiend that he ripped off of Unhinge was used to remove Nantuko Disciple from Kennison's hand. Cephalid Broker came out of the hand for Koby, and the Hybrid died a horrid death when the Fiend and an Outcast blocked it. A second Unhinge offered Sol his fourth land, but by then, it was too little to late. 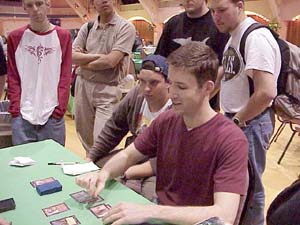 Sol MalkaIt all came down to this. Third game. Sol choose to draw first, and a second turn Werebear blazed out of the gates for Koby, Barbarian Outcast was Sol's reply, and Koby answered back with a Dusk Imp. An Afflict ended the flying days of the Imp, but something more was needed for the Rabid Elephant Koby triumphantly slammed down. Always the man with an answer, Sol played a Faceless Butcher and took out the huge beast. Gravedigger came down for Koby's Dusk Imp, and double Crippling Fatigue gave him his Rabid Elephant back. Things were starting to look bad for Sol. Still he had some tricky stuff and Liquid Fire destroyed the foamy mouth pachyderm. The Dusk Imp came back into play on the following turn for Kennison, and suddenly, Malka found himself mana heavy. Two turns in a row, he drew land, and took beats from the Imp, and Gravedigger. Barbarian Outcast was made for Malka's team, and it threw it's tortured soul in the path of an oncoming Gravedigger to protect it's only friend. Cabal Torturer was the next card for Malka, but it paled in comparison to the swamp walking Krosan Constrictor that was summoned the turn that followed for Kennison. Malka drew no action and ridded the game of the Swamp walking snake., The Grotesque Hybrid made his contracted appearance for the Florida player. Playing with desire, like a caged animal, the People's Champion raised his hand, and wind milled his arm to the top of his deck during his draw step. He needed a spell to deal with the flying Hybrid that had been knocking him down. At two life, he pleaded with his draw.

Rip......Firebolt, straight off the top of his deck! The dynamics of the game had changed completely, and when the Firebolt beamed on the Hybrid, it was coupled with the Torturer, and Malka was back in this card game. It was time for Kennison to rip near mint bombs off of his deck, and the Diligent Farmhand would not be enough. After decimating a Threshold achieved Were bear (With a flashbacked Firebolt and threshold Cabal Torturer if you really needed to know.) Koby drew Puppeteer, and two consecutive lands. Extending the hand in defeat, Sol Malka had finally reached the top eight of a Grand Prix!

Final Result: Sol Malka goes on to the finals where he will meet member of the Magic Colony, Jeff Cunningham.