Semifinals:
Spiraling Out of Control

Joel Larsson is known as many things. He's a celebrated streamer on TwitchTV. He's the pro with the highest Limited match win percentage in 2012. He's Brian Kibler's good twin. He'd really like to be known as a Pro Tour Champion. His opponent, Ben Stark, knows what that's like, and is prepared to do what it takes to hoist the trophy a second time.

The match-up, like so many base-blue-white matchups, centers around Sphinx's Revelation, particularly for the first game. Stark's deck is more suited to playing the pure control role. After boarding, however, Larsson gets access to a great threat in Geist of Saint Traft, and can force Stark to play reactive and then refill with Revelation when Stark taps out. 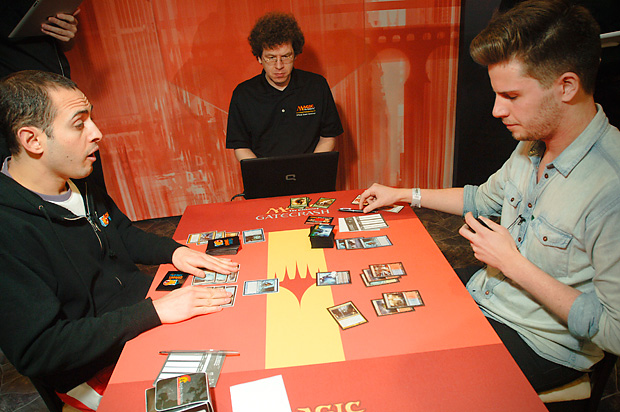 Joel Larsson's seeking his first Pro Tour victory, but to earn his place in the finals, he has to get through Pro Tour Paris 2011 champion Ben Stark first. And Stark's Esper Control deck will be one brutal obstacle to battle through.

The early game sped past. Larsson shot Stark with Searing Spear, then summoned Boros Reckoner. Stark took care of it with Supreme Verdict. Larsson dropped his fifth land and passed. Stark did the same, and Larsson took the opportunity to Snapcaster Mage his Spear, dropping Stark to 14. He untapped and attacked for 2.

"That just happened." said Larsson with a grin. 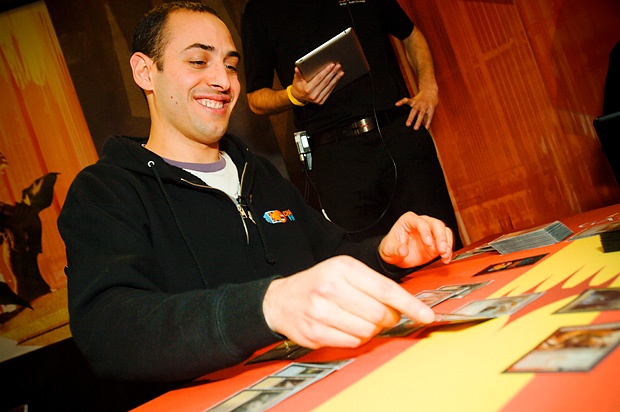 Moment of Heroism? What is this? Innistrad Booster Draft?

Now Stark was safe to rest on his open mana. Larsson swung in and lost his Snapcaster to a Restoration Angel. He played a land and passed with just one more card in hand. Stark began the slow process of Larsson's destruction, attacking with his Angel. Think Twice kept him stocked up on action. He had Devour Flesh for Larsson's top-decked Boros Reckoner. Soon Larsson was at 6, and then the game was over.

Larsson sent back his opening hand and stayed on six. Stark summoned Augur of Bolas and missed, saying "Well, that's fair, I guess." Larsson was quick to untap and throw down Geist of Saint Traft. Stark could do nothing but play a land and pass the turn. Thanks to the Augur of Bolas he wouldn't be taking the full 6, but 4 a turn is nothing to sneeze at. 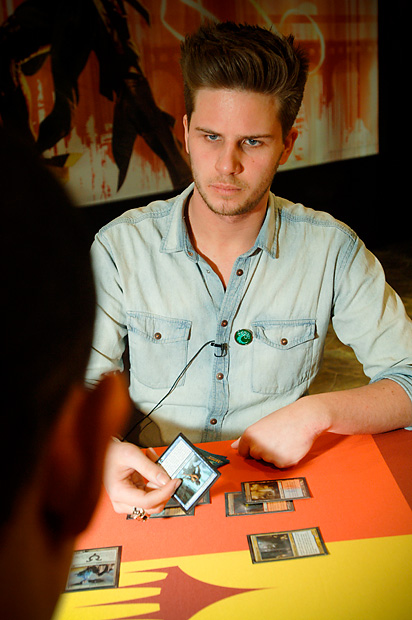 Larsson leads off after dropping the first game with one of the key cards of his sideboard: Geist of Saint Traft.

Larsson added an Augur to his side of the board, but got no free card. Stark played Think Twice, then draw-go. Stark played a tapped Watery Grave and passed. Larsson hit again, adding the Augur to the mix, and dropping Stark to 11. Stark flashed back Think Twice, then untapped. He played a land and passed. Larsson played Restoration Angel at end of turn. Stark responded with Devour Flesh to force Augur of Bolas off the table.

Larsson hit again, keeping the pressure on. Stark used Azorius Charm on Restoration Angel to spare himself some damage, but his life was ticking away from the Geist's token. Larsson summoned Jace, Memory Adept and drew a card, milling himself. Stark was facing a wealth of problems. He played a Sphinx's Revelation for three and took another attack from Larsson. He still had no way to clear the Geist off the board. Larsson's Angel showed up again, and he attacked. Stark had a Restoration Angel of his own, but Larsson had pushed through too much damage. He aimed a lethal Boros Charm at Stark, and Negated Stark's counter for the win.

Larsson again went to six cards. Stark's turn two Augur of Bolas did his job properly this time, serving up Sphinx's Revelation. Larsson played one of his own and got himself a Boros Charm. They played lands and passed, cycling Think Twice and Azorius Charm. Soon they had six apiece. Here, Larsson tried Thundermaw Hellkite. Stark confirmed he had five cards in hand, then played Azorius Charm. Larsson almost let it resolve, then played Unsummon.

Stark untapped and passed with seven open. Again, Larsson went for Thundermaw. Stark played Ultimate Price. Larsson Negated, but Stark Dissipated. He untapped and Duressed, catching a Boros Charm, seeing another and a Restoration Angel. The way was clear for a Sphinx's Revelation for four.

Larsson worked to rebuild his offense. A main phase Angel flickered his Augur and got him an Azorius Charm. Stark continued to play passive. Larsson cycled Azorius Charm, then untapped and attacked with his Angel. Stark flashed in one of his own, and when it resolved, got a Dissipate off his Augur of Bolas. He blocked with his Angel, drawing out Searing Spear. Larsson was down to just three cards in hand. 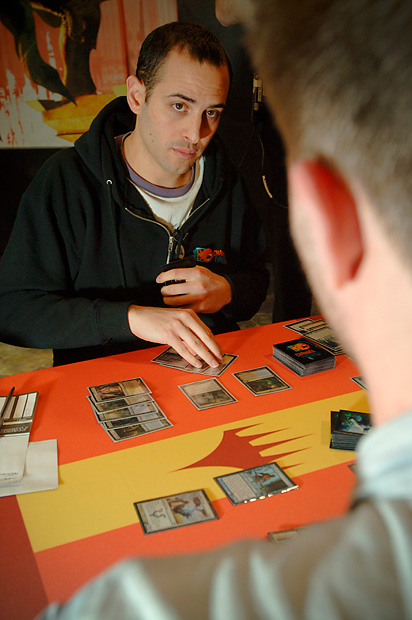 Stark settles in for the long game that his Esper Control deck wants.

Stark summoned another Augur of Bolas, getting a Negate. His two Nephalia Drownyards were online and his life total was a comfortable 24. He started to mill Larsson, careful not to tap out, just in case. He tried a Supreme Verdict, but it was "countered" by Boros Charm. Of course, that mental shorthand isn't quite right, and both players forgot to destroy Stark's Augurs, but the mistake was soon corrected.

Larsson hit for four and passed with just two in hand. Stark went for Duress, and saw only a land and Snapcaster Mage, saying "Yeah, that was probably bad." He passed back. Larsson drew and cast Thundermaw Hllkite. In response, Stark played Sphinx's Revelation for six, keeping two mana free. He let the Hellkite resolve and took 9 back down to 14.

Of course, Stark had found Verdict, and now Larsson was hanging by a thread. The Nephalia Drownyards made swift work of his deck, and Stark was mindful of the threat of a possible Psychic Spiral. When it did fall, and Larsson went for the Snapcaster Mage, Stark was ready with countermagic to take the game.

Again the game started slow, the players cycling cards and playing lands. Larsson made a Restoration Angel at the end of Stark's fourth turn, then untapped and hit. Stark tapped two for Devour Flesh. Larsson responded with Snapcaster Mage, which resolved. He targeted Azorius Charm, then sacrificed the hapless Mage to Devour Flesh. With a shrug, Stark sent the Angel home with Azorius Charm. Larsson flashed back his Charm for a card.

Larsson lent a helping hand, taking cards out of consideration and putting them in a neat pile as he did so. "Probably not Azorius Charm either, and of course not Angel."

Stark leaned back in his chair and thought, then sent Boros Charm to the graveyard. Larsson cycled his Azorius Charm and flashed the Angel into play. He untapped, hit for 3, and summoned the Augur of Bolas he'd drawn, which gave him a second Sphinx's Revelation. Stark got rid of them with Supreme Verdict. Larsson rebuilt with Geist of Saint Traft and Augur of Bolas, the latter giving him a third Sphinx's Revelation. Stark had another Verdict, but three Revelations was going to present a problem.

Larsson started firing. The first met Dissipate. The second he tried on Stark's upkeep, and met Negate. However, Stark was now empty-handed, and everything was riding on his two Nephalia Drownyards. He watched Larsson draw up a ton and hoped to somehow stop the eventual Psychic Spiral. It wasn't long in coming, and it milled Stark for thirty-five. Technically, the game wasn't over. 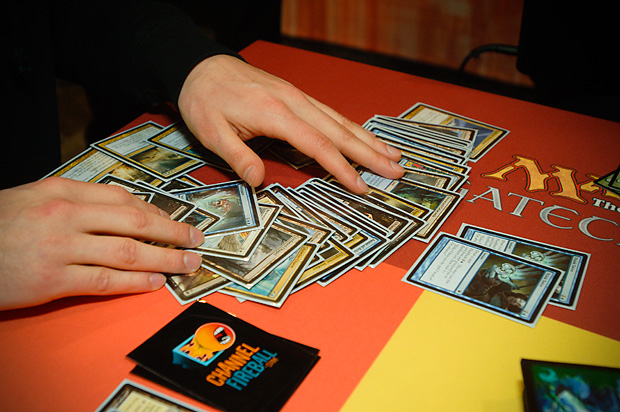 Stark's Nephalia Drownyards and all of their work get turned against him.

Stark played it out as best he could, but the advantage from the Revelation was too much to overcome, and Stark's five-card library meant he couldn't answer back in kind. He milled some cards, but soon conceded.

"This is how it should be. Everything on the line." - Joel Larsson

Unfortunately, they had to wait while the other Semifinal finished so that they could be on camera for the dramatic conclusion. They decided on their opening hands and did their best to be patient. As the applause rang out for Tom Martell's victory over Eric Froehlich, the cameras swooped into place.

Again, Stark opened with Augur of Bolas. This one gave him Devour Flesh. Larsson answered with one of his own, turning over the all-important Psychic Spiral. "I guess that's a good one to know," he laughed. They played their third lands and passed. After Stark's fourth land, Larsson cast an end-of-turn Boros Charm to deal 4. Stark fell to 16, but took the opportunity to flash in Restoration Angel. His re-buy on Augur of Bolas got him a Negate. Larsson untapped and played his own Angel, getting a Searing Spear from his Augur.

Stark Duressed. Larson flipped over a stacked hand of Searing Spear, Boros Charm, Psychic Spiral, Sphinx's Revelation, Thundermaw Hellkite, and Snapcaster Mage. Stark chose to get rid of Boros Charm. Unfortunately, he was stuck on four lands. Larsson calmly ripped the fifth land he needed for Thundermaw. Stark needed a moment to think. He chose to spend Dissipate to stop it. He untapped and cast Think Twice, but still found no land. 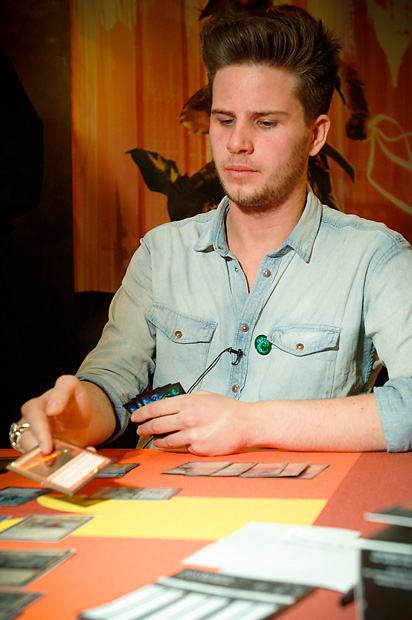 Larsson's burn gives him some extra breathing room as the aggressor in this match-up.

Larsson hit with his Restoration Angel, and after Stark blocked, played the expected Searing Spear. Stark cycled Azorius Charm at end of turn, finally finding himself a land. Larsson's Angel dropped him to sixteen. The flashback on Think Twice got Stark a sixth land. The problem was that a Supreme Verdict on the Angel opened the door for even more dangerous plays from Larsson. He took another three, Negated an end-of-turn Revelation for three, then fell to 10.

10 is not a lot of life, particularly when you're already under pressure from a Restoration Angel. Larsson had another Sphinx's Revelation and Stark started to shake his head slowly, trying to decide what to do. Eventually he played Snapcaster Mage on Negate. The Angel put him to 7 and Larsson took the opportunity to Snapcaster a Boros Charm to drop him to just 3 life.

Stark's back was against the wall. Larsson's Angel swung in for lethal. Stark flashed in his own. In response, Larsson played Snapcaster Mage. It resolved and he flashed back Boros Charm. Stark was forced to target himself with Devour Flesh, sacrificing Augur of Bolas, just to stay alive at 2. He untapped and tapped out for a big Sphinx's Revelation, but his plays at this point were moot. Larsson had another Thundermaw Hellkite in hand, and soon he was headed to the finals.

Joel Larsson wins 3-2 and advances to the Finals!