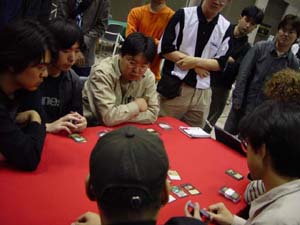 This was a big moment for Shuuhei Nakamura. A longtime disciple of Tsuyoshi Fujita, today they find themselves opposite each other in the "B" seat. Nakamura is joined by his friends Naoki Kabouchi and Kimio Imai, and together they have bested their opposition to win a spot in the Top 4. Fujita is with his perennial sidekick/enforcer, Masayuki Higashino and hope that making their third man Takayuki Nagaoka will reap dividends where none have come before. It's worked so far. Two more match wins will give them another title to add to their resume.

Next to him, Higashino was taking to the air against Imai. Though a pair of Innocent Bloods took out Boneshard Slasher and Barbarian Outcast, Higashino had drawn both Dusk Imps, and Imai was unable to answer them. Roar of the Wurm showed up in time to watch the end.

Meanwhile, Nagaoka was taking it slow against Kabouchi. He picked off his offence until it was just a Cephalid Scout, then took the time to find a plains with Far Wanderings. Unfortunately, that gave Kabouchi time to lay Springing Tiger at threshold and put Ghostly Wings on it. Nagaoka tried Angel of Retribution and Muscle Burst, but Kabouchi slammed down Liquify. The mighty Tiger traded with Mystic Enforcer on the following turn, and was rescued. Psionic Gift on the Scout made Nagaoka's end inevitable.

Fujita's one-toughness brigade proved to be enough to even the score against Nakamura, who was entirely without black mana. By the time he did find it, Fujita had such control of the game that Nagaoka had no choice but to scoop.

Higashino had similar fortune, but it was not mana that Imai lacked, but creatures. Higashino's weenies laughed as they walked past the Narcissism that Imai couldn't use.

Kabuchi's squad of Springing Tiger and Basking Rootwalla were enjoying free hits on Nagaoka thanks to a combination of Churning Eddy, Syncopate and Puppeteer. Nagaoka had no shortage of tricks to try, but lacked the time to try them. Puppeteer made his last blocker irrelevant, and the score was even at one match apiece.

In the final game, Fujita's entire force was a Patrol Hound with Ghostly Wings, a Teroh's Faithful and an Auramancer. Between play and graveyard he had ten lands. Conversely, Nakamura had an abundance of creatures, and a dwindling life total. Early pressure from that flying menace had been stopped by a Soul Scourge backed by Hallowed Healer, and now it was Nakamura's turn to swing in the air. His Patrol Hound finally had to chump the Scourge, and then he had no defences. The apprentice had finally bested his master.