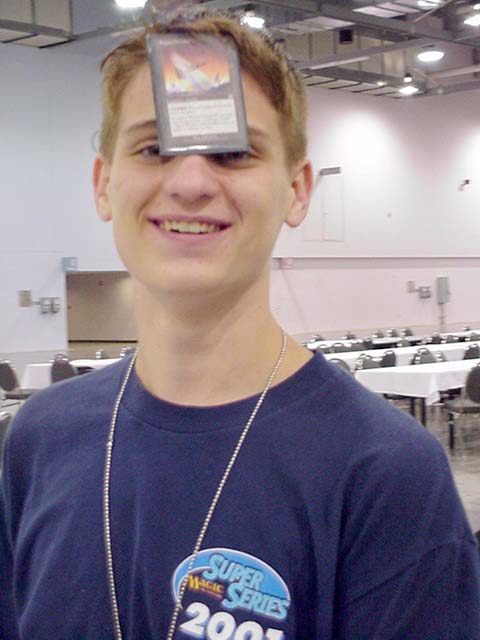 Steve Landen and his Legacy Weapon

The semi finals of the 2001 Amateur Championships saw Idaho Falls, Idaho resident Brad Cole take on Seven Hills Ohio player, Steve Landen. Brad, owner of "A Street Games", is a twenty one year old gentleman who is used to these type of playing conditions. He took third place in the 1998 Mountain Regionals, and then played at Nationals the same year. Brad Cole, a fifteen year old has been delivering beatings on the Junior Super Series circuit for some time now. His highest finish during this season was second place at a qualifier in Columbus, Ohio.

Brad is playing a Blue/Black/White Nether Go deck, and Steve, like most of the remaining field, was sporting a Blue White Control deck that was similar to the decks that have taken many National and Continental Championships by storm.

Steve won the roll and opted to play first. Both players kept their opening hands.

Steve led off with a second turn Millstone. Hoping that this may spell an early doom to his mana hosed opponent, Steve was constantly milling Brad. All good things must come to an end though, and the happiness Steve felt for the milling came to a crashing halt as he milled a lone Nether Spirit into the graveyard.

After it recovered from summoning sickness, Brad took the chance to jump on the offensive. Knocking his opponent down to eighteen life, Steve was forced to Dismantling Blow his own Tsabo's Web. Two counterspells later, the Web laid shattered and Steve's hand was full again. Confusion entered the playing area thereafter as Steve played a Story Circle naming Mize. He actually never named a color, but it hardly mattered as Brad simply played a Vindicate, and destroyed the missing circle. Steve scooped his cards up and conceded game one.

Game one and the lead in the match goes to Brad Cole, who is leading 1-0. 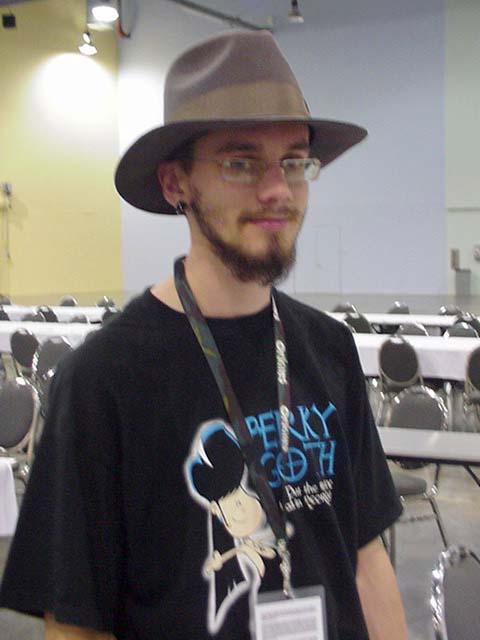 Game two was a lesson in how to use a Millstone wisely. Steve again led off with a second turn stone, and the library wrecking rock took it's toll on the mana deprived Brad. Steve kept using this advantage, and soon had a second Millstone active. Although Brad tried to mount an offense with Dromar. the Banisher, that plan was quashed as Steve played a Story Circle: Black the turn after. Brad decided that it was time to get a new start.

After game two, this match is tied at one apiece.

Brad kicked off the third and final game, and was soon struggling for position.

Brad was not in a bad position after he discarded a Nether Spirit. Steve cast a Fact or Fiction only to see it countered. He then took advantage of Brad's tapped out state to cast a Last Breath and removed the offending Spirit from the game. At this point the libraries were counted and Brad had a full ten card advantage over Steve. Land was played and spells were hoarded as the players prepared for a final climatic counter battle. This battle was never to happen. Discarding a Legacy Weapon over several turns, Steve was able to keep his library at one. This would be good, but the Story Circle that had been holding back a Dromar was soon Vindicated and Steve scooped.

Final Result: After three games, Brad Cole wins the match 2-1! He now moves on to the finals of the 2001 Amateur Championships!