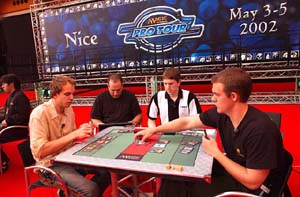 Svend Geertsen burst onto the Pro Tour scene six years ago with his top 8 finish at the World Championships. Since then, he's made two other top 8s, but the last one was at PTLA '99. Since then, he's come back sporadically, making a number of impressive runs at Pro Tours only to fall just short of the top 8, but yesterday the frustration ended as he finally made it back to the Sunday stage.

Svend's opponent is Norway's enigmatic European Champion and character Eivind Nitter. The twenty three year old, appearing in his first Pro Tour top 8 has put up more than a couple of strong finishes, but like Svend, he'd come close too many times, with this weekend signaling the end of a lot of frustration. Now, these two European giants would face off for the right to go to the finals of Pro Tour Nice.

Svend chose to play first and kept his hand, as did Eivind after much deliberation. Svend Peeked at the end of the Norwegian's turn to see what the fuss was about, seeing three Mountains in addition to the one in play to go with four green cards: Muscle Burst, Squirrel's Nest, Possessed Centaur and Refresh. He then played Bog Wreckage and passed his turn.

The second spell of the match was Svend's third turn Gravegouger, which was promptly Firebolted by Eivind, but a more impressive creature, Shambling Swarm followed, to which Eivind's only answer was his first Forest and a Diligent Farmhand. Svend attacked with the Swarm taking Eivind to seventeen before casting Patriarch's Desire on the Farmhand in an attempt to slow the Nest, a big problem for his deck. Eivind's turn saw him cast Refresh on the Swarm in order to draw a card.

Svend, who'd been holding back on casting creatures in order to prevent the Swarm from becoming a detriment, finally decided to play one, casting Scrivener, returning Peek from his graveyard. He cast it a turn later, after Nitter had played Possessed Centaur, forcing him to reveal Muscle Burst, Squirrel Nest, Skyshooter and one of his bombs: Beast Attack. He then cast Ghastly Demise, killing the Centaur before attacking for five, taking Eivind to nine, then cast Fledgling Imp and passed the turn.

Eivind's only play was to cast Skyshooter, which he presumably hoped to use with Muscle Burst to kill an attacker. Unfortunately, his plans were foiled when Svend cast Repel before attacking, and rather than wait until lethal damage was dealt, he conceded in order to get to Game 2 a little quicker.

Eivind sideboarded out two Leaf Dancers for Cartographer and a potential gamebreaker, Mirari. A little too slow for his main deck, Eivind nevertheless has twelve instants, and felt that against blue black, the duplicating artifact could make the difference. Svend meanwhile took Peek and Limestone Golem out of his deck in favor of Coral Net and Dematerialize, both of which are very capable of dealing with Eivind's large token creatures, with the latter answering Squirrel Nest as well.

With a smile on his face, Eivind complained that Svend was taking too long to shuffle, wanting to get to the playing of Magic. Finally, the Dane finished his pre-game regimen, handed Eivind back his deck and was forced to wait to declare while Eivind mulliganed. "He screws up my deck every time he touches it, bastard!" Eivind laughed nervously as Svend again shuffled him up, playing on Eivind's anxiety. Nitter then drew six cards, triumphantly announced 'this is better!' and chose to keep. Svend kept his seven and they were off.

Eivind got off to a better start this time, playing Mountain, Forest and Skyshooter in his first two turns before Peek showed Svend Possessed Centaur, Nantuko Disciple and Krosan Avenger, with Eivind quipping 'good hand' in a decidedly Malkovichian tone. Svend cast a turn two Cephalid Scout before the Avenger hit play on turn three, with Geertsen matching creature for creature with Fledgling Imp trading with the 3/1 on the next turn. Eivind then cast Possessed Centaur, with Svend preparing to take some damage as he cast Concentrate.

Eivind's creatures took the score to 19-14 before he cast both Diligent Farmhand and Nantuko Disciple. Svend, finally playing his second Swamp, Demised the Disciple and cast Cephalid Sage, slowing the bleeding.

Eivind's next attack saw the Dane almost make a mistake, going to block the Centaur with the Sage and Scout before realizing that the Skyshooter would create a 2 for 1, with the pre-emptive realization sending Eivind into hysterics. Svend took the three then untapped and Wasted the Centaur Away, but Muscle Burst saved it, leaving Eivind with no cards in hand. The Norwegian sacrificed the Farmand to thin out his deck and drew, with the ensuing attack taking Geertsen to eight before ending his turn without a spell being cast. 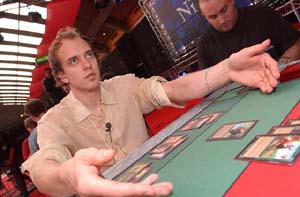 Svend's turn was the antithesis, casting one of the best spells in the format. Laquata's Champion entered play and immediately changed the complexion of the game, with Svend leaving one swamp untapped to potentially regenerate it. The Centaur attacked with the Champion blocking, but much to Svend's displeasure, Eivind had top decked Sonic Seizure, killing the champion. Unfortunately that was the only good news.

Svend drew, cast Morgue Theft and recast the Champion. Then, a turn later, he tapped six mana for Scrivener, and when table judge Paul Barclay pointed out that Geertsen should take a point of mana burn, Eivind asked if he could play both lands in his hand and conceded.

Svend, taking advantage of Eivind's color problems, cast Concentrate on his fourth turn, with Nitter casting Elephant Ambush before Svend discarded an island. The Elephant attacked, getting blocked by the Grinder, but survived the interaction thanks to Muscle Burst. Svend's turn saw him cast Mesmeric Fiend, once again betraying Eivind's hand, which this time consisted of Krosan Archer, Beast Attack, Chainflinger and Sonic Seizure. The Fiend grabbed the Chainflinger despite Eivind's lack of red mana, then cast Coral Net on the Elephant, which died immediately and ended the turn with Nitter creating a Squirrel.

Eivind drew and played what may have been the best card in his deck: Mountain. He cast the Krosan Archer, leaving his Nested Forest untapped. Svend's turn saw him cast Gravegouger, emptying Eivind's graveyard. Eivind attacked for two with the Archer and passed his turn, allowing Svend to untap, but nothing came of it and when Eivind cast Beast Attack at the end of the turn, Svend had no responses, with Eivind making a beast sound when he put the token into play. The beast and the Archer again attacked, taking the score to 11-20.

Svend again drew and passed the turn with another Beast coming into play, and Eivind, having a lot of fun now, attacked with two Squirrels, two Beasts and an Archer. Svend went to block, but instead flopped over his hand full of land. He'd drawn thirteen land, five spells.

Despite being visibly frustrated with his hand, Eivind decided to keep drawing first. He drew the Forest he needed on turn two though, solving many of his problems as he cast Skyshooter before playing a second top decked Forest and cast Cartographer in answer to Svend's Gravegouger.

Svend's failure to play a land on turn four forced a joyous yelp from Eivind, after which he announced 'I'm winning this!' Svend drew his fourth land though, allowing him to cast Gravedigger for the Gouger, after which Nitter ended Svend's turn with style, playing Elephant Ambush.

After the Elephant attacked, Eivind played a third top decked Forest and cast Beast Attack, leaving Geertsen at a severe disadvantage, causing him to bitterly remark 'well played'. He cast Coral Net on the Beast and Gravegouger on the two Flashback cards, but Eivind had the answer in the form of Firebolt, releasing the Attack and Ambush from their prison and then cast Chainflinger, leaving him with one card in hand.
;
Svend drew and then thought for a long time, knowing he was in a lot of trouble. Eivind started singing Queen's Sheer Heart Attack before Svend finally decided to Patriarch's Desire the Chainflinger. Eivind then discarded to the Coral Net, declared 'I have threshold', then drew, cast Cartographer returning a land, cast Acorn Harvest and attacked. Svend had no choice but to shuffle for Game 5.

Svend elected to draw first, causing Eivind to fist pump and do a little dance. While Eivind was loose as a goose, Svend, not ready to bow out of his fourth top 8, looked tense and focused. He peeled one card at a time, inspecting each one with a discerning eye, as Eivind looked at his seven and elected to keep. Svend chose to stay with his seven and Game 5 was under way.

The two, chatting away while waiting for the go ahead, lowered the volume until Eivind began moaning with a smile about not playing a Mongrel 'not even in this game', finally playing Cartographer on turn three. Svend played a third land and thought for some time before playing Coral Net on the 2/2. This time, Eivind let it go and went to draw. 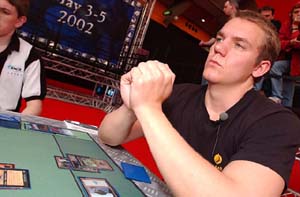 Playing his first Mountain, Eivind cast Krosan Constrictor, and when Svend looked up from his concentration, he found Nitter playing and growling with a Beast token. Svend failed to play a fourth land, while Eivind had no problems with number five, and the youngster cast Squirrel's Nest, leaving Geertsen only to shake his head.

Svend drew, played a second Swamp and slammed a Rancid Earth on the enchanted Forest, leaving one Squirrel behind from the destroyed Nest. Eivind played a fifth land and after Svend played a Cephalid Sage that could only block the Squirrel, Beast Attack hit the table, with the Constrictor and Beast taking Svend to nine life.

Svend, still shaking his head, played Bog Wreckage and relinquished the turn, to which Eivind responded with the Beast Attack's flashback. The two 4/4s, the Squirrel and the Swampwalking Snake attacked, and when the Sage blocked a Squirrel and Repel targeted a 4/4, Eivind threw the lethal Muscle Burst on the table, completing the comeback and ending the match.