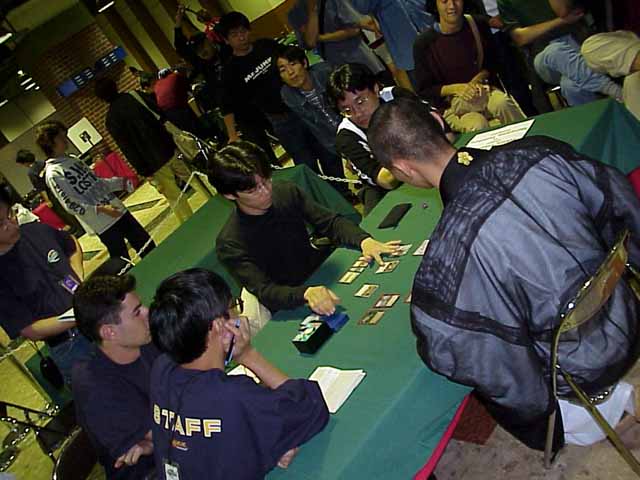 Takamasa Fukata, the Buddhist Priest in training, had made it all the way to the semi-final, where he faced Tomohiro Maruyama for the right to play in the finals of Grand Prix-Sapporo.

After the first few turns Takamasa had amassed an army of small creatures, including Stampede Driver, Spore Frog and two Pygmy Razorbacks. However, Tomohiro had also started well, having played a Diving Griffin, Waterfront Bouncer and Sword Dancer. The Diving Griffin did some unanswered damage, until Takamasa played a Snorting Gahr. The Gahr started on the offence, but the damage was reduced to two a turn because of the Sword Dancer's ability.

Tomohiro's Waterfront Bouncer stopped the Gahr's attack for one turn, before Takamasa drew a swamp. With black mana available, Takamasa used a Vendetta to remove the Bouncer. Takamasa then went into attacking overdrive, sending every creature he had on the offense. This worked for a few turns bringing Tomohiro down to dangerously low life levels. A second Waterfront Bouncer stopped Takamasa's attacks for a turn.

The next few turns saw a green seal played on Takamasa's side and a blue seal played by Tomohiro. Takamasa decided that he needed to go on the offensive if he wanted to have a chance, and after some long thinking sent all his creatures in for the attack. Tomohiro blocked with all his creatures, and when the dust settled, only an Alabaster Wall was left.

The next few turns were very suspenseful, with each player waiting for a creature to finish off the other player. Then finally Tomohiro drew his Thopter Squadron, which finished off Takamasa.

Game two was anticlimactic. Both players started with a mulligan and decided to keep their second hands. Takamasa then proceeded to drop a Stampede Driver, Pygmy Razorback and an Agent of Shauku. Tomohiro was stuck on one mana after deciding to keep a one land second hand. This proved a fatal mistake as Takamasa went all the way with his three creatures. 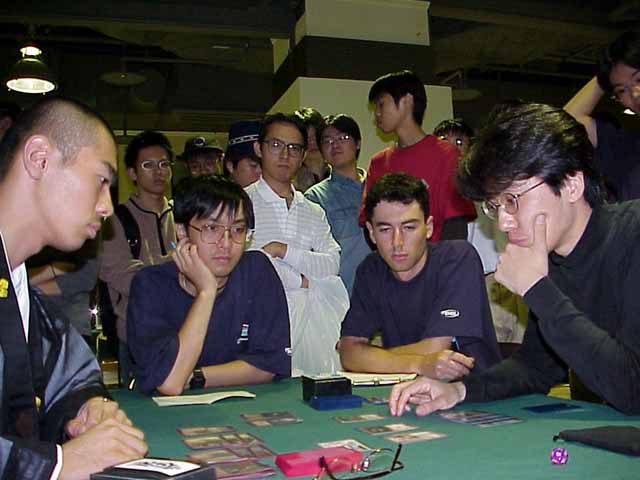 Another long game developed in the third match. Takamasa built an army of creatures including a Pygmy Razorback, Rushwood Dryad, Giant Caterpillar and a Thresher Beast. Meanwhile Tomohiro had established a lot of control thanks to a Troubled Healer and a Ballista Squad. Tomohiro added Waterfront Bouncer and Cho-Arrim Alchemist to his arsenal.

Some very well thought out attacking and blocking phases saw both players start to float below ten life, but the advantage was clearly on Tomohiro's side because of the Troubled Healer and Cho-Arrim Alcemist. A last ditch attack with everything Takamasa had brought Tomohiro down to two life. That was the best Takamasa could do, and it looked as if it was only a matter of time until Tomohiro pulled a power card and won.

It what could possibly be considered a game losing mistake, Tomohiro cast a Bola Warrior, which left him with only one mana untapped. Takamasa took advantage of the opportunity and went in for the attack with his Battlefield Percher for nine damage. This forced Tomohiro to sacrifice down to a Plains and an Island, which wasn't enough to activate the Cho-Arrim Alarmist. Another attack phase later Tomohiro was forced to sacrifice his last two lands, and he was scooping a turn later.

Takamasa Fukata was through to the Finals to play Satoshi Nakamura.