Just two wins separate local hero Takao Higaki and his first title. One of the rising stars of Japanese Magic, Higaki already has an impressive resume of top finishes. Many pros have good words for him, and he's been tearing up this event with Tinker. Standing in his way is amateur Motokiyo Azuma, who is a little overwhelmed at his success. His Enchantress deck has brought him to his first big finish, and he can sense the potential for more. He hopes to continue the tradition of amateur breakout performances at Japanese Grand Prix. 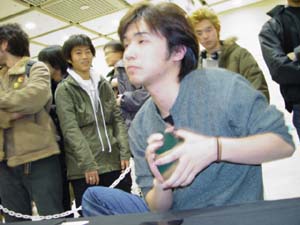 Higaki kept a suspect hand and hoped it would develop. He led with City of Traitors and Grim Monolith. Azuma played a forest. Higaki's next draw was a dud so he just played another Monolith. Azuma Wished for an Argothian Enchantress. Again Higaki drew a blank, and decided his best out was action. He tapped all his mana and played Phyrexian Processor for ten, making a token.

Azuma was undaunted. He played out his Enchantress and drew for Wild Growth. He fell to ten from Higaki's incoming token. He continued to fly through his deck with Fertile Ground and Frantic Search. A second Enchantress helped immensely, and he Living Wished for Serra's Sanctum. Trade Routes was his last play before giving it to Higaki.

Higaki could do no more than force one of the Enchantresses off the board with his 10/10 monster. Now Azuma had everything he needed. Another Fertile Ground and Frantic Search followed, then Seal of Removal. His Sanctum provided more than enough mana to dig with Trade Routes, and soon he found the Words of Wind. Higaki packed it in.

Game 2 was a little more relaxed. Rishadan Port tied up Azuma's forest with Wild Growth. A Frantic Search freed him a turn later, and his three mana got him Enchantress and Wild Growth. Unfortunately, he had no third land. Higaki punished him with Tangle Wire and Metalworker.

Azuma had another Search to break out, but floated mana and went to his draw step without tapping his Enchantress for the Wire. He received a warning and play proceeded. He pitched two Fertile Ground and then exploded with Enchantress, Wild Growth, Enchantress's Presence, ready for a really big turn.

Higaki drew Upheaval. He Tinkered out a Mishra's Helix to lock up Azuma's land. For many turns it went like that while he and Azuma played out land after land. Eventually he could Upheaval with enough mana to replay his Helix, so he did so. Azuma replayed his forest and Wild Growth, and then discarded twelve or so cards.

Higaki continued the lock. Azuma dropped island and Seal of Removal. Higaki finally drew a Grim Monolith, and so busted it out with a pair of keys. He tapped Azuma's lands and watched as Azuma put down Serra's Sanctum and Seal of Cleansing. 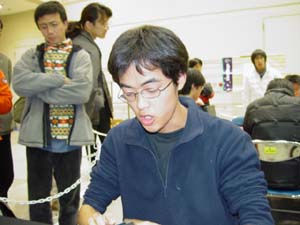 That was when the big turns started happening. Higaki Upheavaled and dropped Dynamo, Key, Monolith, Metalworker and Rishadan Port. Azuma played forest, Exploration, Island, Seal of Removal, able to drop his Seal of Cleansing no matter what on his next turn.

Higaki had more mana than he knew what to do with. He chose to make the Mishra's Helix and lock Azuma up. Azuma dropped the Sanctum and Seal. Higaki Tinkered up a Processor for five, leaving himself at one, made a token passed it back. Azuma smashed the Helix. Higaki had Ports ready to keep him pinned. Azuma made an Enchantress and passed it back. Higaki made another token and then bashed in. Azuma accepted his beats.