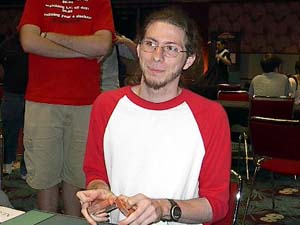 Taylor Parnell is a twenty-three year old student at the University of Cincinnati who's on vacation in Florida, and figured he'd swing by the GP to use his byes. He's attended two Pro Tours previously (both Extended formats), and has done surprisingly well this weekend with the only real rogue deck (D.C. Green) in the top 8. His opponent, Michael Kuhman, is a local Florida amateur who is pretty sure his rating was locked in the basement before this tournament, but no longer, as he was the last undefeated player in the tournament during the Swiss, and steamrolled his way through the quarterfinals and into the top 4.

The matchup was an interesting one, and one that hadn't been seen at all during Feature Match coverage during the weekend. Parnell thought that it was rather even going in, but the result belied this, as Kuhman had no problems dispatching the G/B deck and sealing a place in the finals.

Turn 3 Arc-Slogger from Kuhman was the first play of the match, one Parnell countered with Troll Ascetic. A Furnace Whelp on turn 4 from Kuhman brought a new aerial threat, while Parnell played one of his maindeck Karstoderms on his own turn. Unfortunately for Parnell, he couldn't draw a source of black mana to cast the Echoing Decay in his hand, and a few Arc-Slogger activations plus a Seething Song-juiced Furnace Whelp ended the game. 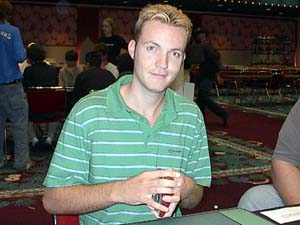 Parnell started off game 2 with a Tel-Jilad Chosen and Joiner Adept, cards that few would expect to see in the semifinals of any major tournament prior to this weekend.. Kuhman began game 2 with back-to-back Molten Rains plus a Flamebreak that killed a horde of elves, and finally a Seething Song into an Arc-Slogger. Parnell's deck delivered exactly zero answers, as with his Adepts destroyed, he never found a third black mana to Death Cloud and clear the board of threats, and consequently died without putting up too much of a fight.