Semifinals: Thaaaat's Me vs. Re-elect Gore 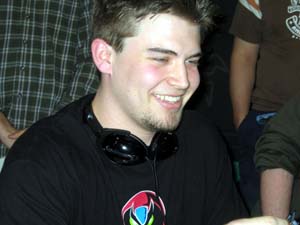 to the two teams prior to the match provided two very different opinions of the match-ups. While both teams agreed that Brian Kibler was the overwhelming favorite against Bill Stead they each thought the opposite wing match was going to determine the winner.

Re-Elect Gore felt that Eric Froehlich's deck was awful beyond compare. Eric called it the worst deck he has ever drafted in his life. They believed there was almost a zero chance of him beating Charles Gindy. Gindy was focused on the Megatog in Eric's deck and gave it more credit than it was due in the match-up.

Finkel and his teammates felt his match-up with Chris Fennell was the one that the team's fate hinged on and they all agreed that he held a slight edge. Thaaat's Me felt otherwise and considered the match-up to be heavily in their favor. Only Granite Shard could save Finkel in their opinion.

(Finkel vs. Fennell)
As they sat down to the match Chris slid a face down card in Jon's direction, "Set number. Odd or even?"

Chris's side of the table erupted with laughter as Chris revealed a Shadowmage Infiltrator, "No, it is even!"

Chris came out of the gate with a Bonesplitter. He had no turn two play while Jon made an Alpha Myr. Chris's, "You're up," sounded as testy as you would imagine coming from a mana-screwed opponent.

Goblin Replica from Jon stared down at Seat of the Synod. Chris drew and played Frogmite but was still on two lands. Jon went right to four and attacked with his Replica. Chris chose not to block and Jon killed the land after combat. Jon shrugged at Chris's Swamp off the top and took four from an equipped Frogmite.

Jon calmly untapped and killed the Frog and its weapon with Unforge. The Myr got in for two more and Jon passed the turn without a play. Chris was still without a third land and had to discard on his next turn-he chose to pitch a Nim Shrieker. He fell to ten on the attack and quickly Terrored Jon's Ogre Leadfoot--saving him from a discard when his deck failed to yield land again.

Brian Kibler also dispatched a mana-screwed opponent. Stead's team felt his match-up was a washout anyway so it as not as heartbreaking as the one by Chris--who they felt had the best match-up. Eric Froehlich was already down a game-as predicted.

"Let's see you blow this one up." Darksteel Citadel begat Arcbound Worker. Jon took three on the next turn when it picked up a Bonesplitter. He had no play on turn two and fell to fourteen. Chris's third turn resulted in a Neurok Spy. Jon's Krark-Clan Grunt had to choose between blocking the Spy and the Worker--Chris made a Duskworker first--and he chose the Spy. He fell to eleven.

Jon attacked for three and played an Arcbound Fiend that threatened to steal the counter from the worker. Neurok Familiar flipped an Annul into the bin. The Worker got in for one last point before it was bled to death and Jon dipped to seven. Chris blocked the Fiend with his Nuisance token and fell to eleven on Jon's next attack.

He thought for a while about his next turn before sending his Familiar into the red zone, "I have decided on this much." He was holding Essence Drain and was trying figure out if he could aim the burn spell to finish off Jon or did he need to kill the Oxidda Golem? He decided not to wait and Drained Jon immediately-bringing his life up to fourteen.

Jon attacked and when Chris's next draw was Terror he conceded. "I had three outs I could draw if I drained him--another Bonesplitter, Warhammer, or Looming Hoverguard."

Jon agreed with the play, "I was hoping you would drain my creature. I was holding Predator's Strike. Draining me was the right play."

Froehlich quickly fell to Gindy's beat down and Bill pulled off an upset win to force Game 3 against Brian's powerhouse affinity deck. His team had all but written off this match-up during deck construction.

Stead laughed and shook his head, "I am really glad to be playing the tiebreaker. I have only like a 30% chance to win this match."

Kibler was skeptical that it was as high as that, "Were you in the same draft that I was?"

The ever confident Kibler just smiled, "That was my draw in the first game and I smashed him."

Chris had faith and as the camera snapped away while they took their draws he offered, "Take a picture of the Paris."

Kibler slumped and reached for his deck. "I'll keep it" He was only kidding but the Stead side of the table had bit. Stead knew he was in for karmic retribution and pointed the camera in his own direction as he had to go back for six new cards, "Go ahead take the picture."

Now Chris was despondent and could barely watch, "I don't even think there are six cards in your deck that win this match."

Brian opened on two lands an a Spellbomb while Stead made an Iron Myr. Brian had no third land and a grimace. Stead played Nim Replica and attacked for one. Brian discarded and Stead made an Arcbound Bruiser on turn four while Chris stepped away to do a little dance. "Yausssss!" 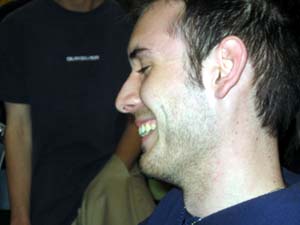 Brian found a Tree of Tales and played Neurok Spy and was at sixteen life. Stead attacked with everyone and Brian ate the Myr and falling to ten. Stead played Razor Golem.

Brian was still stuck on three lands and played Neurok Prodigy. He put both men in the way of the Golem and it ate the Prodigy. Stead dumped out this hand with another Myr and Nim Replica and Brian scooped it up and next turn when he demonstrated the willingness to attack with everyone.

Kibler laid his grip on the table and showed off the Spire Golem, Arcbound Crusher, Myr Enforcer and other goodies he could not cast for the want of just one more land.