Semifinals: Thank You, Sir…May I Have Another? 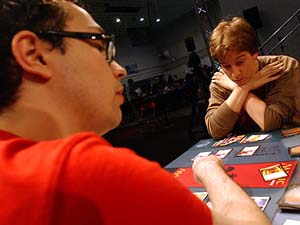 Sadeghpour was facing an uphill battle against Siron.

Siron, as I've mentioned before, has a ridiculous deck in this Top 8 and already blew through his quarterfinals match in under 15 minutes. His opponent, Johan Sadeghpour, has a slightly shaky white-black deck that took down David Larsson in a tight four-game match.

Decklists were handed out before the match, so the players had full knowledge of the contents of each other's decks.

Siron's good fortune continued as Johan was forced to ship his hand back. The red mage led with Blademane Baku and Ghost-Lit Raider. Johan, fully aware of what the Raider can do to a board position, wasted no time in killing it with Horobi's Whisper. Blademane Baku then traded with Devoted Retainer, and the players filled their board with Brothers Yamazaki and Ogre Recluse on one side, and Kitsune Blademaster on the other.

The Recluse then woke up and attacked, dealing 5 to Johan. Moonwing Moth and Kitsune Blademaster swung back for 4 and Johan passed the turn, saving a Kitsune Diviner in hand, perhaps to tap the Ogre Recluse at a later date. Recluse knocked him down to 9, and then Siron added a Moonlit Strider, making Johan regret the decision to keep the Diviner in his hand.

Ogre Recluse came barreling in again. Johan didn't have any attractive blocking options, and chose to fall to 4, a scary proposition against a deck packing Undying Flames.

Indeed Siron aimed the Flames at Johan's head. Kami of Fire's Roar flipped off the top, and just like that, the game was over.

This one was practically over before it even began. Siron had a Frostling and an Akki Underling, and Johan missed his third land drop. Siron then followed up with Honden of Infinite Rage, which shot down a Kitsune Diviner. Johan slid it into his graveyard, then paused, slid it back and tapped the Frostling. Siron graciously didn't make an issue of it.

In any case, a second Frostling plus a Ronin Houndmaster convinced Johan to concede after his draw step. Without a fourth land, he was just too far behind to catch up.

"Sorry. Everybody's mana screwed against me today," Siron said, genuinely feeling bad about it. Sometimes it's just your day.

Johan pulled up a nice hand with three lands and four spells. Siron peered at his cards, thinking about the possibilities. He took a peek at the top of his library before he shuffled it in.

"Good mulligan. I play four plains, and I had three plains, my two white cards, and two red spells."

On turn one, Devoted Retainer met Frostling. Retainer waltzed in to say hello and Frostling showed some restraint and stepped aside. Siron was rewarded when Johan played Kitsune Loreweaver. He was quite happy to kill that one. Johan also added a Blademaster and then a Waxmane Baku.

With his fourth land, Siron played out Kami of Fire's Roar. A fifth land from Johan enabled a Moonlit Strider, plus a tap of Siron's blocker and a swing for 5 damage. Siron made a second Fire's Roar and the game bogged down.

Moonwing Moth from Johan, no attack. Barrel Down Sokenzan took down Moonwing Moth and Siron ended his turn. Johan continued to grow his army with Kitsune Healer and Kitsune Diviner, and Siron took awhile with his turn, even asking the judge what game it was.

"This is Game 3. You're up 2-0." Johan started laughing. He seemed resigned to his fate, but he was having fun with it.

Undying Flames came again from Siron. Wow. He targeted the Kitsune Blademaster, but Johan sacrificed Moonlit Strider to give protection from red and the whole spell, including the epic portion, was countered. This seemed like a mistake actually, because with Moonlit Strider and the Kitsune Healer both active, Siron would have a hard time killing Johan's creatures. Without the ability to play spells, he would have been overwhelmed quickly.

Johan drew Okiba-Gang Shinobi and sent in his Blademaster on a dream that it would get through, but there was little reason for Siron not to block, given that he still had a Moonlit Strider of his own. He double-blocked with his Kamis and Strider was sacrificed to save one, retrieving Frostling. Lantern Kami from Johan put a counter on Waxmane Baku. Siron countered with the Honden of Cleansing Fire and his Frostling.

Okiba-Gang Shinobi ninja'd off of the Lantern Kami, emptying Siron's hand of Mountain and Captive Flame. He immediately topdecked Honden of Infinite Rage. How lucky. 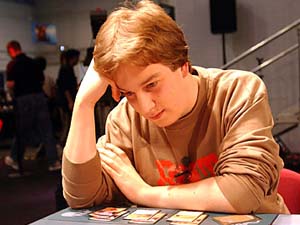 Geoffrey Siron never took his foot off the gas.

Johan now needed to win quickly. His Diviner tapped a Kami of Fire's Roar, and he tapped the other two blockers with his Waxmane Baku and sent the team. Frostling sacrificed to off the Lantern Kami and Siron took 8, falling to 1. He then lapsed into thought, and meanwhile Siron worked on some math. It must have turned out badly, because he knocked his deck. Johan then put Heart of Light on his Kitsune Diviner, protecting it from the Red Honden.

Siron shot the Kitsune Healer on upkeep and climbed to 5. There was six points of power on Johan's board plus a Diviner that could tap both Kamis; one on end step and one on his own turn. A land, and he would die.

Johan drew a Swamp, paused, dropped his hand on the table, and conceded the game at 19 life. Siron was stunned.

"Why do you concede?"

"Yeah but…" Siron shrugged, and broke into a smile, realizing he was on now his way to the finals.