Semifinals: A Time of Heroes

With his Top 8 in San Juan, Paulo Vitor Damo da Rosa is pushing for a defensible claim as the third best player in the history of Magic. While he lacks the trophies of Jon Finkel or Kai Budde, he has managed to make the cut to Top 8 in 6 out of the 23 Pro Tours in which he has competed—almost unheard-of Top 8 percentage considering the length of his career. Could Puerto Rico finally be his time to seal the deal?

Not if American Noah Swartz had anything to say about it. The young player, in his first Top 8, had a doozy of a white-blue deck and while he didn't have his opponent's resume, he did have a solid deck and the desire to make his mark in San Juan.

Having won the die roll, Paulo opted to lead off with Bloodthrone Vampire, which was answered by Knight of Cliffhaven from his opponent. The Brazilian had a turn-three Awakening Zone, whose Spawn tokens would no doubt make ready sacrifices to the Vampire. Swartz cast Dawnglare Invoker and began attacking with his Knight, opting not to level it in order to use his mana for board development. 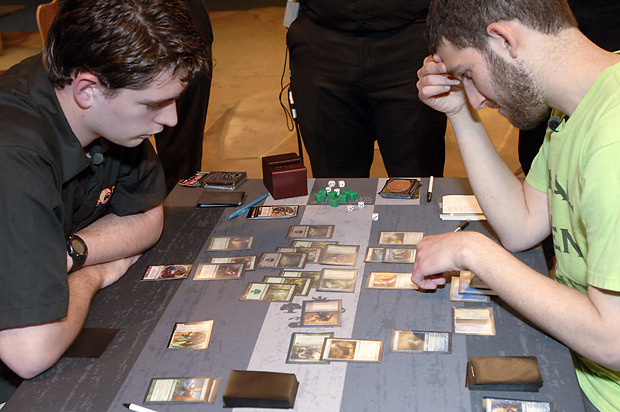 Sacrificing a Spawn to get an extra mana, Paulo cast a third-turn Ondu Giant, accelerating him by a land-drop and giving him the possibility of six mana on his fourth turn thanks to the free land from the Giant and his Zone. Swartz leveled his Knight and attacked for 4.

Despite having access to a lot of extra mana, Damo da Rosa cast Wildheart Invoker for his fourth turn, adding another attacking threat to the battlefield and expanding his forces considerably against Noah's two creatures. The American was going to have to begin blocking if he wanted to stay in the match, but Noah didn't think so; he sent his flyers sideways before casting a Makindi Griffin and Guard Duty targeting his opponent's 4/3 Invoker. The combat step put Noah in the lead 16-10 in the race to 0.

Paulo evened up the score a bit by attacking his opponent to 13, then using Last Kiss to take out Dawnglare Invoker and bump himself up to 12. It looked like he was in solid shape barring a removal spell from his opponent for the Bloodthrone Vampire, and even then the Broodwarden in his hand promised to make his Awakening Zone a powerful threat. Totem-Guide Hartebeest came down for Noah, fetching up Hyena Umbra as the American looked to stay in the game. When he tried to cast the Aura targeting his Hartebeest, however, Paulo was ready with Vendetta to kill both. The removal spell dropped Damo da Rosa to 7, and an attack from Knight of Cliffhaven made it 5 though it left Swartz with just Makindi Griffin back to block.

Down came the Broodwarden for Paulo, who rumbled to the red zone, killing Makindi Griffin after it blocked his Bloodthrone Vampire and knocking his opponent to 7. Swartz was dead in a turn if he couldn't kill Paulo first and/or come up with some tricks and blockers to prevent the otherwise inevitable. He attacked with his Knight of Cliffhaven to knock the Brazilian to 3, then cast Enclave Cryptologist.

Damo da Rosa dutifully put his Spawn token from Awakening Zone onto the battlefield, drew his card for the turn, then sent the team sideways. Noah had Regress for Broodwarden and a chump on the Vampire to stay alive, but post-combat Paulo cast Jaddi Lifestrider to cushion his life total beyond what Noah could finish in one turn. The American drew his card for the turn, examined the field of battle to see if he had any options, then conceded the first game.

Neither player liked their opener and opted to send it back for a fresh set of six cards each. Content on six, they kept, with Noah opening on Enclave Cryptologist. When he tried to send it to level 1 on his second turn, Paulo was ready with Vendetta in response. A second leveler hit for Noah a turn later in the form of Coralhelm Commander and he put it to level 1 with a leftover mana. He tried to level it further the following turn, but again Damo da Rosa had a removal spell, this time Leaf Arrow. 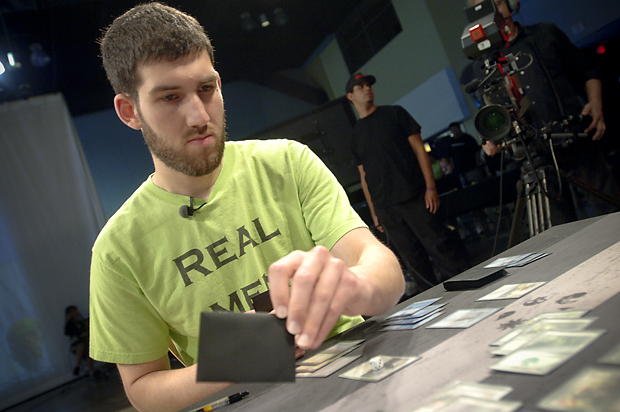 May the Swartz be with you.

Knight of Cliffhaven made it a third leveler for Swartz while Paulo Vitor fired back with Dread Drone, then Ondu Giant a turn later. Apparently out of removal, the Brazilian couldn't do anything to kill Transcendent Master from Swartz and could only watch as the 3/3 picked up Hyena Umbra and soon became a 7/7 with lifelink and first strike. Spawn token chumps with sacrifices helped contain the lifelink aspect of the Master—you can't deal damage to a blocker that's not there anymore—but a Champion's Drake made attacking into Swartz a troubling proposition.

Merfolk Skyscout joined the American half of the battlefield and set Paulo to thinking about what his options were. He cast Corpsehatch targeting the Skyscout and netting himself two more sacrificial Spawns, then attacked with Ondu Giant. Noah took the damage and tried to figure out a plan to deal with his opponent's Spawn tokens. He cast Kabira Vindicator and passed.

Paulo drew for the turn, then passed back and found himself under attack from a level one Knight of Cliffhaven and Champion's Drake. A Last Kiss to gain 2 life kept him alive for another turn, but a blank on the top of his deck sent the two players off to the third game, tied at one win each.

The two players shuffled up for the third game, and as Paulo drew his opener it was clear he wasn't happy. He cocked his head sideways and squinted at the hand before finally opting to mulligan.

Champion's Drake started the game off as the first creature to the battlefield batting leadoff for Noah. Paulo was close behind with a Pawn of Ulamog, then Ondu Giant. Survival Cache for Noah gave him a cushion in the life race and netted him two additional cards, but a Merfolk Skyscout was shot down with Leaf Arrow and the American began feeling the heat from Paulo's board position, which added Wildheart Invoker to its ranks. If his tempo-based white-blue aggro deck couldn't keep up with Paulo's acceleration and fatties, Noah was going to find himself down another game.

The Champion's Drake continued turning sideways and a Frostwind Invoker provided Swartz with a meaty body, but Vendetta from his opponent sent the blue creature to an early demise. Jaddi Lifestrider from Paulo gave him a bump in life, an extra attacker, and a formidable blocker and the super-pro was doing a good job of putting his opponent in a bad situation. Still, the Brazilian was out of cards while his opponent had a grip of four, meaning if Swartz managed to stabilize Paulo might find himself in trouble as well.

An Ikiral Outrider came down to help block Paulo's threats, but the confident Brazilian still sent his Ondu Giant and Jaddi Lifestrider sideways. The attack made the totals 10-8 in favor of Brazil, and a postcombat Joraga Treespeaker and level up meant Damo da Rosa would be able to pump with his Wildheart Invoker the next turn. If anything, it was a Time for Heroes for Noah Swartz, who cast exactly that card for his turn before passing. 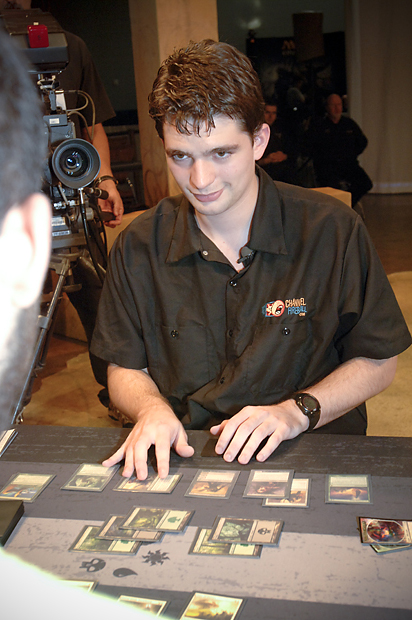 Paulo is smiling at you. That's not a good sign.

It wasn't enough, however, as the extra mana for Paulo allowed him just enough to pump his Wildheart Invoker and, thanks to trample, kill the American to regain the lead in the match.

Both players had two-drops for the fourth game, Noah Swartz leading on Champion's Drake while Paulo Vitor had Bloodthrone Vampire. Paulo followed his creature up with Null Champion while Noah had Time of Heroes, then Hyena Umbra on his Drake. What he didn't have was a follow-up creature and he was soon facing an Awakening Zone from his opponent as well. Was Noah Swartz headed for a Semifinals exit?

He didn't think so, staying aggressive with his Umbra'd Drake casting a post-combat Merfolk Skyscout and sticking Bloodthrone Vampire on Guard Duty. Paulo's Zone began pumping out Spawn tokens and he cast Wildheart Invoker, but Noah had Hada Spy Patrol and was able to level it once. That made it 4/4 thanks to Time of Heroes, and just like that it looked like Paulo was the one in trouble, staring at a life deficit of 17-11.

The Wildheart started to get its beat on before Paulo cast an Ondu Giant, then he used a pair of one-mana removal spells to take out both Merfolk Skyscout (Leaf Arrow) and Hada Spy Patrol (Vendetta). At the end of the turn he had improved his situation dramatically but at a cost of 4 life, putting him on 7. Not going down without a fight, Swartz attacked to make it 5, then cast a Totem-Guide Hartebeest, opting not to fetch up an Aura (most likely because he had none).

With the game looking more and more in hand for Paulo Vitor Damo da Rosa, he attacked to put Noah at 10 without losing any creatures then cast a Broodwarden. Swartz was in a tight spot, but had Makindi Griffin and Enclave Cryptologist for his turn, then considered an attack. He thought better of it, opting instead to pass with his Champion's Drake wearing Hyena Umbra back for blocking. It was a safe play, but it wouldn't let him win without the help of the top of his deck.

Paulo untapped and drew, thinking for a few moments about how to attack. Ultimately he opted to just send his whole team in, minus his newest Spawn and the Bloodthrone Vampire on Guard duty due to the fact neither could attack in the first place. Swartz considered his options, knowing the Wildheart Invoker's ability could go off—the Brazilian had seven lands and multiple Spawn he could sacrifice to generate eight mana.

The American carefully moved the creatures around in the red zone and came up with a block that kept him alive for one more turn. When his draw wasn't a miracle, however, he knew he was out of the game, the match, and the Top 8. 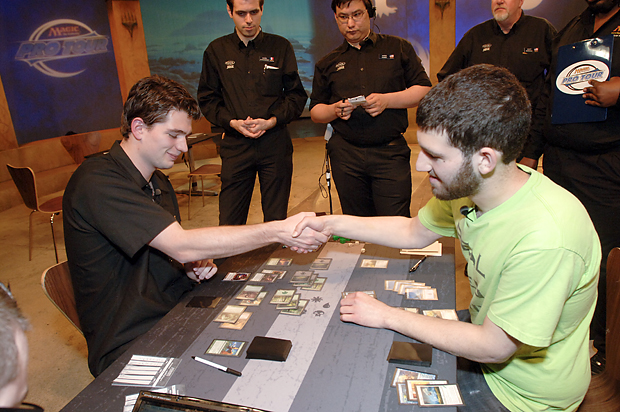