For the semifinals, Conley Woods, who had yet to lose a match at this World Championships aside from concessions to teammates, would face his "toughest matchup in the Top 8". His teammate Josh Utter-Leyton had already fallen to Junya Iyanaga's Kessig Wolf Run deck, and Woods knew that he'd have to play well to keep his winning streak going. Unlike his teammate, Woods would be on the play for the first game, which given the aggressive nature of the Tempered Steel deck would certainly be relevant. Would it be enough though?

Iyanaga already had an amazing tournament. In addition to making the Top 4 of the World Championships, he had been playing in the Magic Online Championship (username SEVERUS), meaning that every day after playing six rounds in the main event, he'd have three or four more to play. 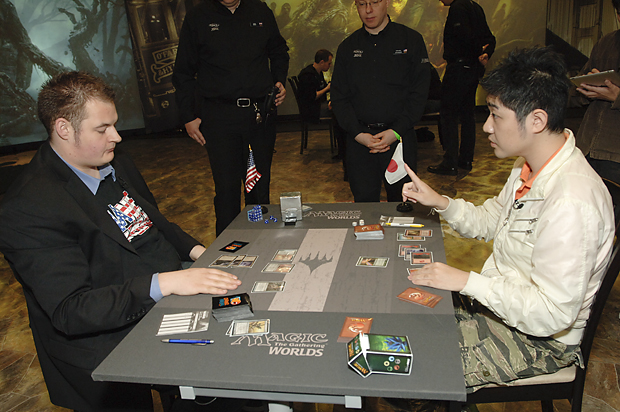 Facing his toughest match of the Top 8, Junya Iyanaga and his Wolf Run Ramp deck, Conley Woods is fighting to not only keep Channel Fireball represented, but also to preserve his winning record in the tournament.

Conley, whose finish in the swiss rounds afforded him the right to play first, led off with a Vault Skirge, seeing only a Copperline Gorge from Iyanaga on the first turn. Woods follow up was a pair of copies of Signal Pest, which would allow for some hefty attacks the following turn. Iyanaga, cool under pressure, simply cast Rampant Growth for a Mountain.

Conley had to get early pressure on, and did so with attacks, before playing a Mox Opal and an Etched Champion. His attacks put Iyanaga to just 14, prompting a Slagstorm which left Conley with just the Etched Champion. A second Etched Champion came down, but by this point Iyanaga had the mana to cast Primeval Titan, which fetched a Kessig Wolf Run and an Inkmoth Nexus.

Conley had to press his advantage while he had it, and used a Dispatch to kill off the 6/6. A Vault Skirge followed, and Conley attacked his opponent down to just 8 life. Iyanaga thought for a little about how to strike back. He had an abundance of lands (something that Woods could not say, with just an Inkmoth Nexus and two copies of Moorland Haunt), and those lands would let him get in for quite a bit of damage.

Iyanaga contented himself to get in for one point of poison using his Inkmoth Nexus and passed. Conley was quick to enter the red zone with his squad. Iyanaga activated two copies of Inkmoth Nexus and traded them for an Etched Champion (thanks to some help from Kessig Wolf Run) and a Vault Skirge.

All Conley had now was his Etched Champion, a Mox Opal, and some lands. He had just a single card in hand, and sat with his arms crossed as he watched Iyanaga resolve a Green Sun's Zenith for Primeval Titan, which in turn got another Kessig Wolf Run and Iyanaga's last copy of Inmoth Nexus. 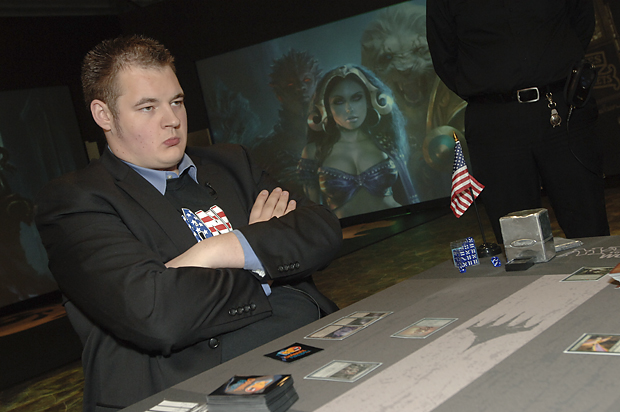 You wouldn't be happy either if your opponent got their second Primeval Titan into play for the game.

Woods had to activate his Inkmoth Nexus to turn on metalcraft such that Etched Champion could attack Iyanaga down to 4. Iyanaga thought for a while, before attacking with Primeval Titan. The attack allowed him to fetch out another Kessig Wolf Run and a Copperline Gorge. The Titan did just six points of damage, and a follow up Inferno Titan did another 3 to Conley. Woods was on just 14 now, and attacks next turn for Iyanaga would be lethal if the Channel Fireball pro did not do something. He tried an attack with Etched Champion, but when Iyanaga blocked with an Inkmoth Nexus, Woods scooped up his cards. It was on to the second game.

For the second game, Woods was again on the play, and each player took a single mulligan. Woods had increased his land count slightly to accommodate Hero of Bladehold, while Iyanaga was actually one land lighter, working to squeeze in many powerful sideboard options against Woods.

Conley's start seemed like a powerful one, with a land plus a pair of copies of Memnite on turn-one, a Spellskite on turn-two, and an Etched Champion for the third turn.

Iyanaga had some ramping in a Sphere of the Suns for turn-two, and this allowed him to cast a Slagstorm right on time to keep down those Memnites, along with a Galvanic Blast to kill off Spellskite. Woods had a Tempered Steel, which meant that his lone Etched Champion could continue to take chunks out of Iyanaga's life total.

With just one artifact in play, Woods' Etched Champion was open to being killed off by Iyanaga, and killed off it was, with a Viridian Corrupter fetched out by Green Sun's Zenith. Woods had a Memnite to follow up with, but this was soon killed off by Inferno Titan. 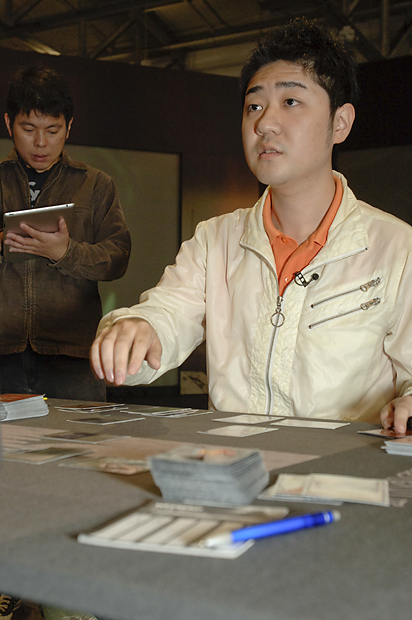 A Primeval Titan was the next elbow to come from Iyanaga, leaving Woods drawing slim to stay in the game. After a little thought, Woods scooped up his cards.

In any match outside the Top 8 that would be it, but this being a Top 8 match, it is best of five. This meant that he was on his last life, trying to win three on the bounce to advance to the finals of the 2011 World Championships.

Game three again saw both players take a single mulligan, but things got even worse for Woods, who with his back against the wall had to mulligan a second time.

After all that, he began with a Vault Skirge and Memnite, but didn't have a second land to follow up with. Iyanaga, meanwhile, had Rampant Growth to get up to three lands on his second turn. He upgraded his Memnite to a Glint Hawk, but did not replay it, wary of Slagstorm. The Slagstorm came, and Iyanaga continued to advance his board with a Green Sun's Zenith for Birds of Paradise . 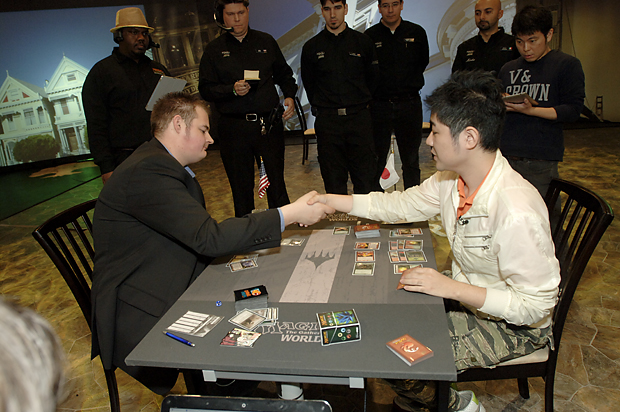 Iyanaga takes down the man who couldn't be defeated this weekend, Conley Woods, in order to advance to the finals!