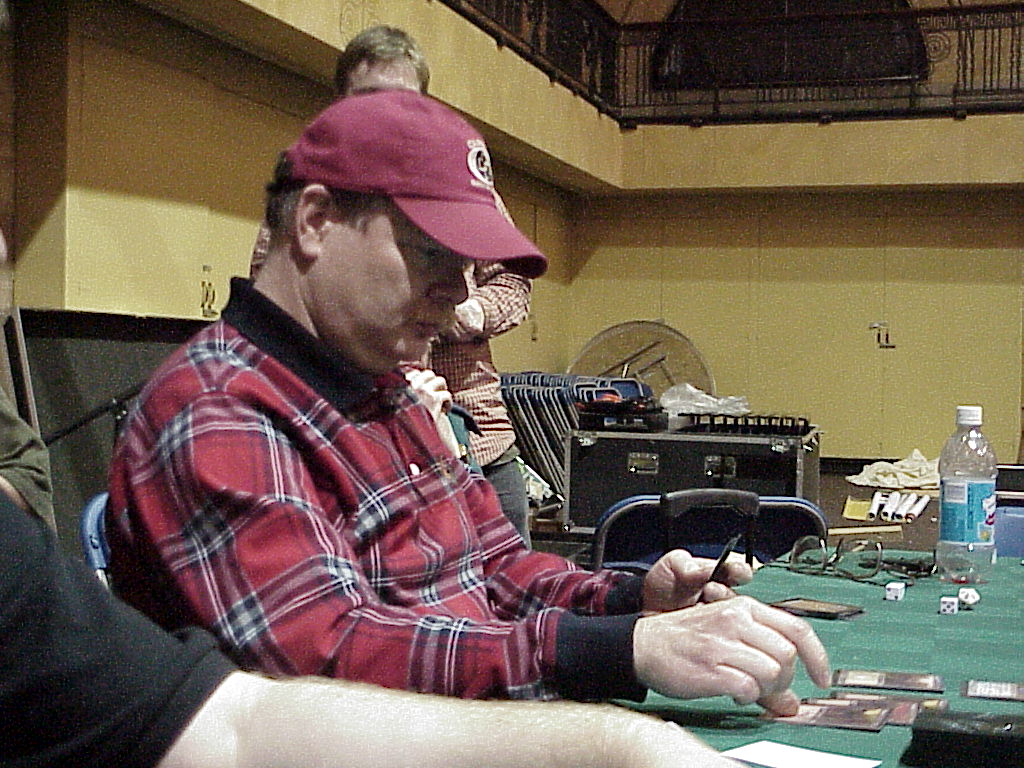 Tom Swan is among the oldest Magic players to ever compete on the Pro Tour. He has qualified a number of times but has not achieved a title finish until now.

Alan Comer has been dedicating most of his time to his job, which has seriously impeded his ability to prepare for tournaments, and thereby his results. Comer fell off the 'Gravy Train' just recently, and is happy to be qualified for Pro Tour: Barcelona.

Swan opened with a Sunscape Apprentice. Unfortunately, he was not about to play another creature for a long time. Swan drew plenty of lands, an Armadillo Cloak and a Sparkcaster, but no red or green creature to allow this 5/3 monster to remain in play.

For several turns Swan had to content himself with attacking for one point of damage. In the meantime, Comer also got a very slow draw. His first play was an Urborg Shambler, which met an untimely demise at the hands of Tribal Flames.

At this point, Comer began to summon his slower, but larger monsters. He cast a Phyrexian Reaper, followed by a Lava Zombie. Comer paid six mana for that one, bouncing back a Cinder Shade, which meant a promise of yet another really nasty critter in the near future.

Swan kept on drawing land. He did not really feel like enchanting a 1/1 Apprentice with Armadillo Cloak, so the only play he had by turn four was to play the Sparkcaster. It was forced to bounce itself back to his hand, but dealt a point of damage in the process.

Swan's next draw was Assault/Battery. He made an Elephant, but Comer only used it as an excuse to "Bolt" Swan via an Agonizing Demise. At this point Swan was forced to finally enchant an Apprentice with the Cloak, as his life total was getting pretty low. He attacked for five, using Wax/Wane to pump up the creature and gain a bit more life.

Comer sealed the game by casting Magma Burst with kicker - three to the Apprentice and three to Swan's face. Another attack step and another land draw later, game one went to Comer.

Sunscape Apprentice found its way into play on the first turn once again - only to be matched by a Nightscape Apprentice on Comer's side of the table. Swan did not draw any sources of green mana, so casting a Crimson Acolyte on the following turn was his only other play for a while.

Comer had a Blazing Specter in his hand, and was glad to see Swan use up his Tribal Flames to take out a Kavu early on. Comer failed to play a fourth land for a turn, but caught up and the Specter blazed its way toward Swan. A turn later, Swan finally drew a source of green mana - but it was a Tinder Farm, which delayed him by yet another turn. Comer attacked yet again, then summoned Phyrexian Reaper.

The next card was somewhat unexpected - a Keldon Mantle enchanting Blazing Specter, and allowing it to attack for six.

At this point, Swan was faced with a complicated decision. Here is the situation as it stood for the moment:

Down to 12 life, Swan's only chance was to get a Knight with a Cloak on it into play as quickly as possible, then hope to top-deck like a madman. Add to this the fact that he would have to play around the Blazing Specter's discard ability.

After the match, Aaron Forsythe and I discussed the situation and felt that the following play would be best: Cast Harrow, sacrificing a Mountain to get a Forest and a Plains. Use those to cast a Llanowar Knight, leaving white mana untapped to save it from any red removal. Discard Wax/Wane to Specter next turn, then cast the Cloak.

Swan thought about the play for several minutes, but decided that Wax/Wane was worth more than Harrow. He tapped his only sources of white and green mana to summon Llanowar Knight, and passed the turn.

Comer attacked, bringing Swan down to four life, and knocking Harrow out of his hand.

Swan drew a card and cast Armadillo Cloak. Knight attacked Comer bringing him down to 12 life and gaining four points for Swan. Comer brought his opponent back down to one life, attacking with all of his creatures and using the Keldon Mantle to pump up the Specter, forcing Swan to discard Wax/Wane.

Swan cast a Razorfoot Griffin and attacked, bringing Comer down to 8 life. 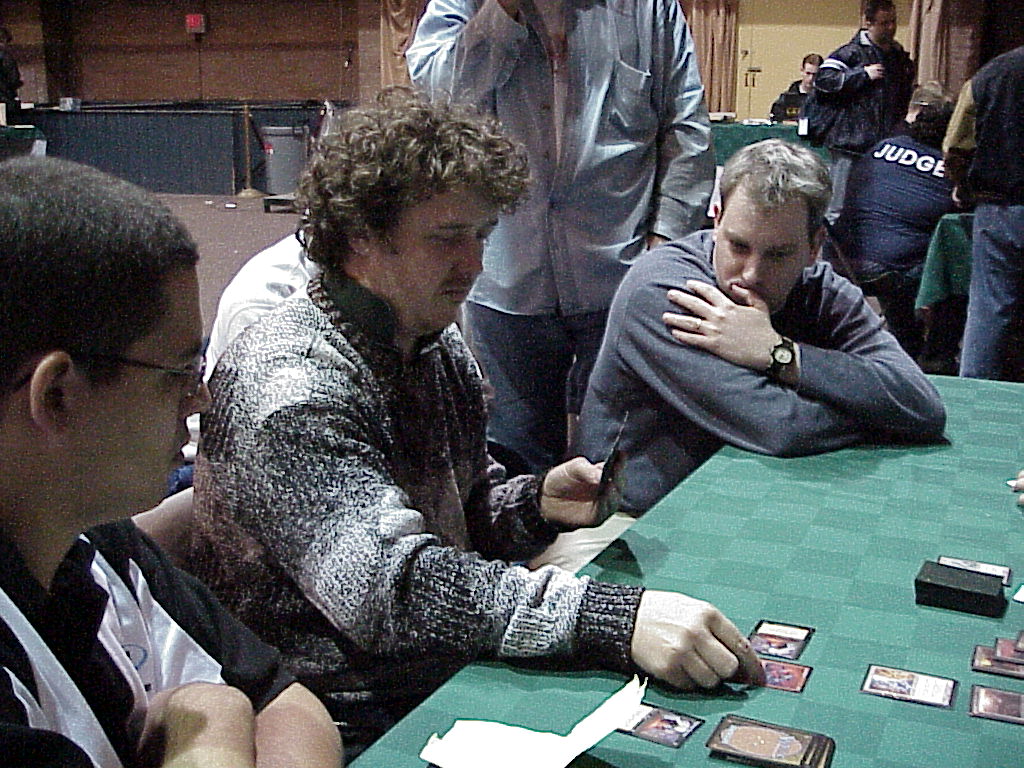 Comer drew his card and triumphantly cast Magma Burst with kicker, targeting Griffin and Swan. Swan tapped a land, sacrificed another land and cast Pollen Remedy! He prevented three points to his flyer and three to himself, therefore not allowing Blazing Specter to attack him, and only losing three life to Phyrexian Reaper.

In fact, Swan made a mistake. He could have prevented only two points of damage to the Griffin, which would still keep it alive, and four to himself. That one point of damage will become relevant later in the game.

Comer was now in trouble. On his turn, Swan attacked him down to 4, gained enough life to survive the next attack, and still had the Griffin untapped and ready to block. Meanwhile, every creature on Comer's side of the table was black and could not block the Knight.

Comer attacked with his creatures, and used Nightscape Apprentice to give Blazing Specter first strike. Keldon Mantle would have allowed him to regenerate his creature too, but he needed the remaining four mana to cast his only non-black creature, a Kavu Runner.

Runner chump-blocked the Knight, leaving Comer at 3 and Swan at 7 life.

Remember that one point of damage Swan could have prevented? Comer was holding a Keldon Mantle in his hand. He needed to draw a Mountain in order to deal exactly seven points of damage to Swan. Comer peeled the card off the top of his library, saw that it was not in fact a land, and conceded the game.

Swan's hand consisted of five lands, a Razorfoot Griffin and Rith the Awakener. Comer had only two lands, but a few early plays to work with.

Comer cast a Nightscape Apprentice and a Phyrexian Battleflies. He failed to draw a third land for several turns, although he did draw it in time to Magma Burst a Razorfoot Griffin. 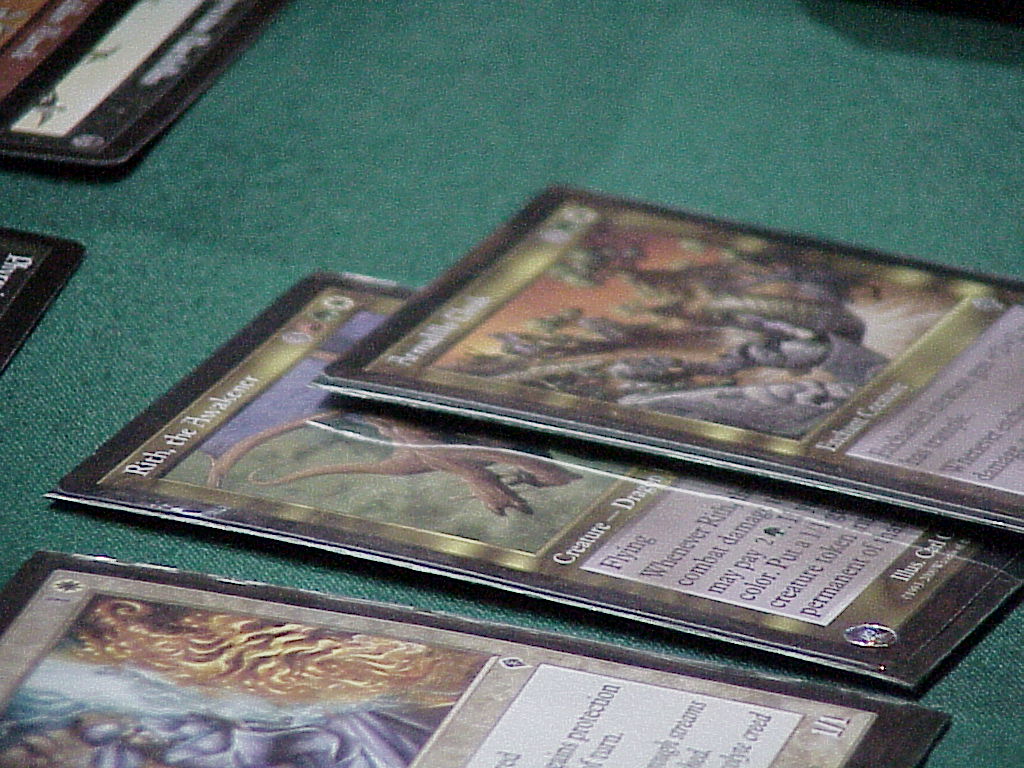 Unfortunately for Comer, Rith came out on turn 5, as Swan sacrificed Tinder Farm to summon it. Comer had no answer, other than to enchant Battleflies with Keldon Mantle, thus able to block Rith with a regenerator. Problem with this strategy was that it was only going to work for a single turn. Swan had a Crimson Acolyte in play, and was going to off the Mantle shortly.

Rather than do that, Swan opted for a "slightly" better option - he enchanted Rith with Armadillo Cloak, and attacked for eight!

Brian Kibler was quickly summoned by some of the spectators. Kibler made the play famous when he used the two cards in his Top 8 deck at Pro Tour: Chicago. Having reviewed board position. Brian asked Tom to "quit stealing his tricks."