Semifinals: Topdeck of the Ages

I was playtesting…" said Olivier Ruel as he arrived at the table for his semifinal match. "Neither one of our decks won a game when we went second. I really hope I win this die roll."

It was Jones who won the die roll, giving him a leg up before a single card had been played. The Englishman kept his hand, as did Ruel, and they were off. Jones cast a "real man's Kird Ape," via Stomping Ground, flashing Arabian Nights style and following that with a Savannah Lions. Ruel also had early action, casting Plagued Rusalka on the first turn and Dark Confidant on turn two. 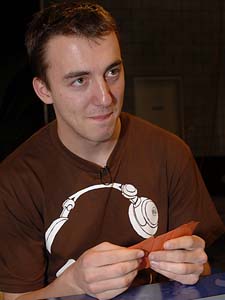 Jones shipped his animals into the red zone and attacked, doing four to Ruel before casting Burning-Tree Shaman. Ruel triggered his Dark Confidant on upkeep and was nugged for another four, as Bob the fickle master of card advantage flipped over a Ghost Council of the Orzhova. Ruel cast casting Teysa, Orzhov Scion and passed the turn.

Jones cast Bathe in Light on his Shaman, pushing the witch doctor and the ape through for five and dropping Ruel to 3 life. Confidant flipped over Okiba-Gang Shinobi in Ruel's upkeep and it was on to Game 2.

Jones took out all his Shamans, Kamis of Ancient Law and Flames of the Blood Hand for burn, Tin-Street Hooligan and a quartet of Umezawa's Jitte.

Both players mulliganned for Game 2, but Jones had toss his hand back twice more, going down to four cards before finding an acceptable hand. He then did the completely improbably, reeling off a series of spells that immediately put Ruel on his back foot. Hand of Cruelty threatened to shut down Jones's offense, leaving Craig wondering if he could peel again. "This better be a burn spell…" muttered Jones. He looked at it and cackled briefly at his fortune, Shocking the bushido knight out of the way before swinging again. Jones wasn't done there though, plucking an Umezawa's Jitte off the top this time. 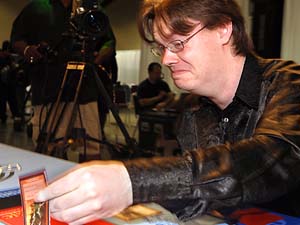 Jones had a steady stream of burn all match

Ruel was reeling. "I'm curious to see if you have any chance at all if you don't draw Jitte plus burn."

Jones continued to be lucky, drawing a Watchwolf off the top of his deck and correctly read Ruel for a removal spell, refusing to walk into a huge two-for-one by attacking with both of his Wolves. Instead Slay took down the one bearing a Jitte and things became tense again. The tide finally turned in favor of Ruel when he Mortified Jones's other Wolf, leaving him creatureless and bereft of cards.

Dark Confidant, Descendent of Kiyomaro, and Teysa attacked and Jones took the damage, dropping to 7 with two counters on his Jitte. Plagued Rusalka tricks killed Jones's last living creature, giving Oli an extremely tense game 2, even after a triple mulligan.

Both players kept seven this time, and Jones once again had a strong opening, with a fully-leaded Kird Ape on turn 1, but he stumbled on turn two, failing to cast a second monster. Back-to-back Teysas hit the board for Ruel, the first dispatched via Kird Ape damage and a Shock, while the second died to Char.

Ruel was playing very carefully, managing his life total and drawing out Jones's burn on his less relevant creatures, while setting up Ghost Council, often a game-turning creature in this matchup. Castigate forced Craig to reveal that he was only holding three lands (with five already on the board), and Ruel could breathe a sigh of relief - his life totally residing at a safe at 9.

Ruel dropped to 5 after another attack (this time with Savannah Lion on board), and Jones played another Lion, his deck finally delivering some threats. Meanwhile Ruel's hand was filled with spells that didn't matter and a redundant Council. Faced with few options, Ruel attacked with his Council, sacrificed it, then cast a second one behind it. Jones drew a Jitte off the top, equipped, and swung with the team, taking care of the replacement Council while Ruel kept counters off the Jitte by sacrificing the Orzhov masters with damage on the stack. 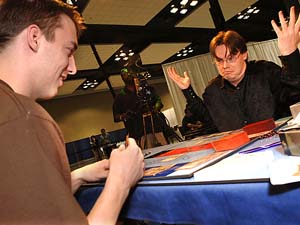 Jones had the lead, but for how long?

"Come on deck, I am not asking for so much," Oli lamented. He drew a blank and said, "That's crazy - how can I lose this game even now?" By not drawing any creatures, of course, and lady luck forced Ruel to capitulate, the victim of some extremely bad draws at the end of the game.

Game 4 of this epic struggle saw Jones mulligan to six this time, while Ruel came out of the gates in just the fashion he wanted, again playing Teysa and Ghost Council on turns 3 and 4 while Jones stumbled. One could give details of this game, like how Ruel used Seize the Soul to further blow Jones out of the water, but the little things would all simply add up to this headline: Jones was a punching bag who had almost no action, and just as Ruel predicted, both players held serve on the play and it was now down to one final game.

It was Ruel's turn to mulligan for Game 5, while Jones for once did not have a turn-one play, casting Watchwolf on the second turn as his first creature. Ruel played a pair of Plagued Rusalkas on his first two turns. Jones lacked a red source, while Ruel had to do a contortionist tricks with Godless Shrines and Orzhov Basilica to get lands in play. Jones rapidly had two Watchwolves on the prowl, but was stuck at two land with no outlet for what were clearly red spells in hand. "Land or not for a PT Final?" wondered Oli, as Jones again whiffed on a vital mana source.

Bathe in Light let Jones's Wolves through again, and Ruel was suddenly desperate to stabilize the board and staunch the flow of blood.

Castigate revealed Hooligan, Shock, Guerilla Tactics, Isamaru, and Kird Ape. Ruel stole the Shock, but Jones drew a Stomping Ground on his next turn, blasting Ruel's defending Hand of Cruelty from the board, and dropping Ruel to 3 life, losing a Wolf in the fray. Isamaru was called in as reinforcements for what felt like a fifth game worthy of Homer.

Jones may have made a mistake by casting Kird Ape on his next turn, giving Ruel a target for the Seize the Soul in his hand, but if Oli didn't have the Seize, the Ape stood a chance of winning Jones the game. This was made all the worse by the fact that Ruel had just drawn a Jitte, giving him serious options. The Ape went down in a mess of blood and Ruel got a flying spirit token as part of the bargain.

For those of you playing the home game, your scenario is this:

Ruel chose to cast the legendary artifact, equipping it to the flying token and flying over for one, leaving the Hand back to block, and moving the Jitte to it before ending his turn. The Hooligan destroyed the Jitte on Jones's turn, but not before the life totals were made 15-7 in Jones's favor - Ruel snatching a crucial four points of extra life. Olivier gave a little fist pump on his next draw, casting Dark Confidant and then playing Plagued Rusalka behind it, opening the way for him to control combat and use the haunt from Seize the Soul whenever he wanted. The tension at this point could be cut with a knife. Jones was just waiting for his deck to deliver, well… anything, while Ruel kept holding on for dear life.

Jones pushed his puppy into the red zone, letting it trade with Ruel's Dark Confidant, and losing the Hooligan to Ruel's spreading plague. Jones was nonplussed by the result, casting another puppy and Kird Ape. Ruel was now in the driver's seat though, and he began pushing through damage via the Hand and a flying token, while his Rusalkas held down the ground. The haunt from Seize the Soul plus Rusalka tricks left Jones with only a Watchwolf in play, and Olivier pressed his advantage, attacking with his squad to put himself one turn away from victory, and leaving Jones with practically no options and only one card in hand.

"Practically no options" is such a long distance from no options, however, that it is sometimes difficult to believe. Jones spent his last card in hand, firing a Char at Ruel and suddenly the hopeless once again had hope.

Ruel stood up from the table and began pacing nervously, waiting for the final card to flop.

Jones did just that, and this was the result: 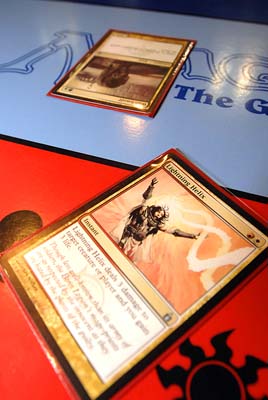 The rest, as they say, is history. Craig Jones was on to his first Pro Tour final.