Semifinals: A Tough Row to Hoe

he other half of Sunday's American dream are three-time PT Top 8er Eugene "Eugenius" Harvey and his longtime TOGIT teammate John Fiorillo. Lately, however, Harvey's responsibilities away from the game have been keeping him from events, and he has suffered mediocre results in those he does make. Fiorillo has been ratcheting up his game, and this Sunday appearance leapfrogs his previous best finish.

The Japanese duo of Kentaro Yamamoto and Yuuta Takahashi have been taking the hard road to the Pro Tour for a while now, dominating PTQ after PTQ, and now they have the breakout performance they've been looking for. With a little luck, they would walk away Champions.

The Americans won the die roll, and after a free mulligan for Fiorillo, they were off.

The first spell was Lost Hours from Harvey on Yamamoto, showing Leaden Fists, Haunting Hymn, Ghost Ship, Urborg, Tomb of Yawgmoth, Mountain, Swamp, and Island. Harvey sent the Fists away. Fiorillo made a Scryb Ranger, which fell to Flowstone Embrace. Yamamoto made an Augur of Skulls. 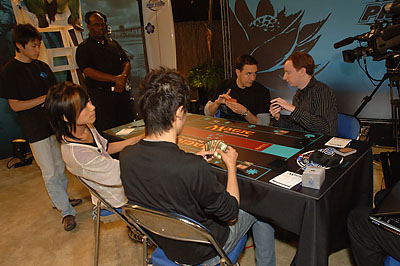 Fiorillo's frown deepened. His deck had decided he wouldn't be playing this time around. Harvey dropped a fourth land and made no other play. The Augur decided to eat Harvey's hand, forcing him to give up Brute Force and Boom // Bust in order to keep Viscid Lemures and a land. Kavu Primarch and Ghost Ship joined the fray, while Harvey turned a land into Drain Life for four.

Harvey pulled up Vesuva and copied his Keldon Megaliths, sitting back to drain again. Fiorillo was forced to discard. He still had his game face on, but the board couldn't lie about his chances. The Americans took another bash on the chin and watched their opponents drop Savage Thallid and a morph. With only one active player, the game was snowballing away from them.

Harvey hit hellbent to turn on his Megaliths, and gunned down the Goblin during upkeep. Fiorillo drew and laughed, "Well, that's something." Errant Ephemeron had shown up four turns too late.

Yamamoto and Takahashi had no intention of going easy on them. The Thallid got a Verdant Embrace, and the whole team rumbled across. No blocks and an unmorphed Slipstream Serpent meant 19 damage. Suddenly the buffer provided by the Syphon-Mage wasn't all it needed to be.

Harvey and Fiorillo had one more turn of blocking, draining and Megalithing in them. The insult to the injury was that the Leaden Fists had finally made it to the top of the deck, removing even that one-turn reprieve.

Kentaro Yamamoto and Yuuta Takahashi defeat Eugene Harvey and John Fiorillo to advance to the finals.