Stanislav Cifka has been on an absolute tear this weekend, having won all but one of his seventeen matches thus far. Most Magicians can only dream of winning streaks that strong, let alone at a Pro Tour. His Second Sunrise deck, reminiscent of the "Second Breakfast" deck that struck fear into people's hearts at the World Championships in Paris way back in 2006, has been described by many as the best metagame choice in a long, long time.

Sitting across from Cifka is Hong Kong's Shi Tian Lee, and while this is his first Pro Tour Top 8, Lee had a couple of Grand Prix Top 8's in 2008, including a win in Birmingham.

Both players opted to play combo decks this weekend, but unfortunately for Lee, his is just flat out slower than Cifka's. Lee is going to need to leverage his disruption spells to ensure he gets to cast his game-winning Scapeshift before Cifka can get his Second Sunrise engine online. 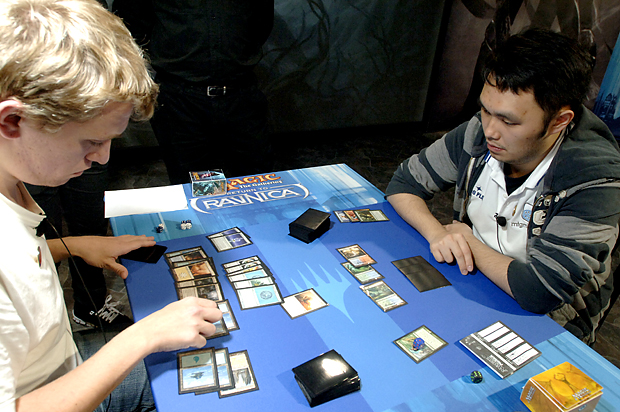 Stanislav Cifka's Second Breakfast heads into a Semifinal match against Shi Tian Lee, who had access to a slower combo deck but also came packed with disruption.

The early turns of game one were spent with each player trying to assemble their game plans with Sleight of Hand and Serum Visions. However, if Lee was looking to keep up with Cifka, he needed to be accelerating his land drops with Sakura-Tribe Elders and Search for Tomorrow, and he just wasn't doing that.

He Izzet Charm'd one of Cifka's two Elsewhere Flasks, but when he went to cast a Telling Time at the end of Cifka's fourth turn, Cifka leapt into action, destroying one of his own Islands with a Ghost Quarter, sacrificed the Flask, and a Conjurer's Bauble, before casting a surprise Second Sunrise to bring them all back into play, putting him up a couple of cards, with an extra card in play.

Weary of Cifka's deck, Lee played his fourth land, a Misty Rainforest, and passed back the turn, now potentially capable of disrupting Cifka with a Cryptic Command. 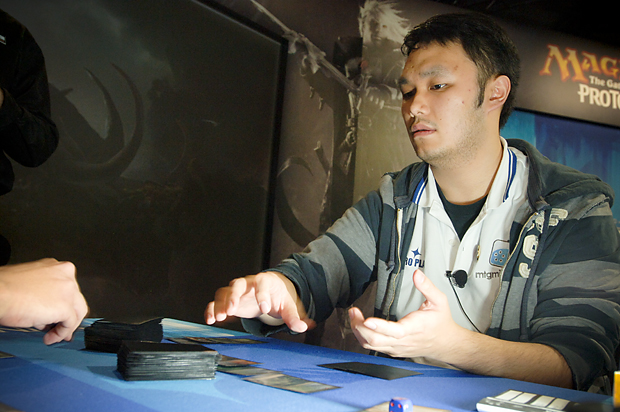 Lee builds his lands up while keeping mana open to counter Cifka's turns.

Cifka cast Sleight of Hand, keeping a Reshape and shipping a Chromatic Sphere to the bottom. He then cast Silence. Lee cracked his Misty rainforest to cast Cryptic Command on the Silence, and tried bouncing the Ghost Quarter with the second mode. Cifka sacrificed the Quarter to destroy his Island for the second time, this time fetching an Island.

The Silence was countered, but Lee was now tapped out. Cifka Bauble'd the Second Sunrise in his graveyard to the bottom of his deck, and then Reshape'd his Flask to get a Lotus Bloom, which he sacrificed to cast another Second Sunrise, returning everything (including Lee's Rainforest) to play.

He Ghost Quarter'd again, cast and cycled a Chromatic Star, and then sacrificed his Lotus Bloom to cast Faith's Reward. He again cycled his Star, and sacrificed his Bloom and again cast Silence. With Lee now completely out of the picture, Cifka was able to continue churning through his deck, Ghost Quartering out more land each Sunrise, and eventually Reshaping another Lotus Bloom into the mix, allowing him to generate additional mana each time, instead of just breaking even. From there, it was just a matter of finding his Pyrite Spellbomb.

I'd like to say it wasn't long before Lee was dead, but it was.

Lee had to mulligan to five in game 2, leading with a Flooded Grove, but failing to draw a second land until his fourth turn. By then, Cifka already had Lotus Bloom half way through its suspended sentence, and several trinkets in play. 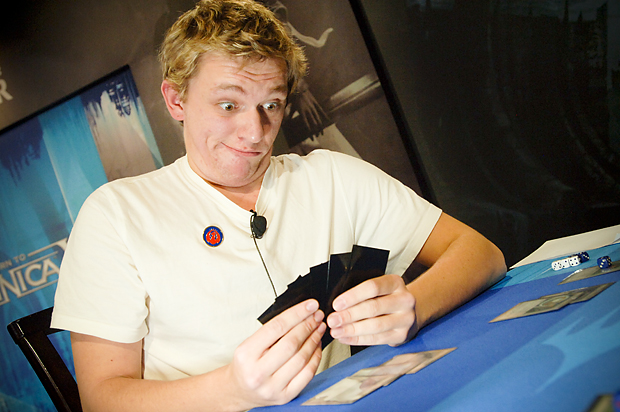 Lee suspended a Search for Tomorrow, but when the Bloom came online, Cifka was ready with the Silence. Lee countered it with an Izzet Charm, and Nature's Claim'd the Bloom before Cifka's main phase, but that still didn't stop him going off, this time with the help of a Scalding Tarn coming back again and again with each subsequent Sunrise or Faith's Reward. Lee watched intently, until Cifka tried to Gitaxian Probe him, when he scooped up his cards to avoid giving away any information unnecessarily.

Lee kept his hand this time, while Cifka sent his first hand back for six new cards. Lee played a Breeding Pool untapped, while Cifka played a Misty Rainforest, fetching an untapped Hallowed Fountain, and playing a Serum Visions.

Lee fell to 16 to play an untapped Steam Vents, while Cifka cast another Serum Visions and a Chromatic Star. Lee did not like the Star, countering it with an Izzet Charm, before playing an Island.

Cifka cast a pair of Conjuror's Baubles, and at the end of his turn, Lee flashed in a Vendilion Clique, flushing a Reshape out of Cifka's hand, leaving a Faith's Reward and a Silence.

The Clique attacked Cifka to 14, as Lee played a Mountain, before passing the turn back with Cryptic Command mana available.

Cifka played a land, and when Lee tried to Nature's Claim one of the Baubles at the end of his turn, he opted to cycle it away. Lee attacked him to 11, and played another Mountain. Cifka cast yet another Serum Visions on his turn and played a Ghost Quarter. At the end of Cifka's turn, Lee summoned a Snapcaster Mage, and reused his Claim on the second Bauble, which Cifka cycled as well. 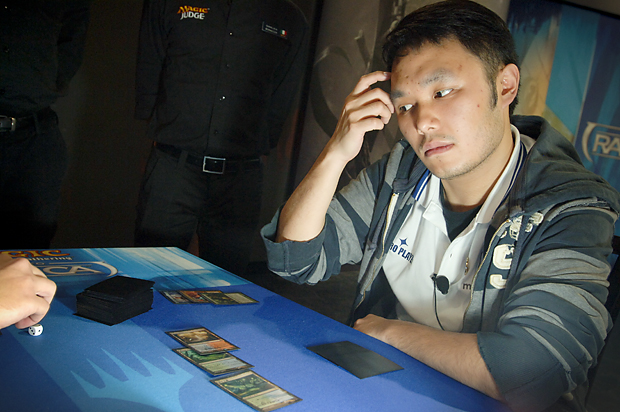 Lee contemplates how quickly he needs to stop Cifka before his opponent goes off.

Lee attacked Cifka to 6, and again passed back the turn with 5 mana available to him.

Cifka cast a Pithing Needle, naming Relic of Progenitus, and passed the turn. Lee attacked him down to 1, and played an untapped Stomping Ground, putting him at 14.

Cifka made his move, starting with a Silence. Lee responded with a second Clique (destroying them both), and again sending a Reshape to the bottom of Cifka's deck, leaving him a Chromatic Star and a Faith's Reward in hand. The Silence resolved, and Lee sat back to see if Cifka could pull any rabbits out of his hat (hat not pictured).

He began by Ghost Quartering an Island into a Plains, and then playing and cashing in a Chromatic Star and a Conjurer's Bauble. He played another Ghost Quarter, and replaced it with an Island, but the lone Faith's Reward in his hand was not enough to get his engine going, so they were off to game four.

As the players shuffled, Yuuya Watanabe defeated David Ochoa on the other table. As they waited for the cameras, I asked the players how they rated their chances against Jund. Both players agreed they felt they had pretty good Jund match-ups, "but it's Yuuya," Lee was quick to point out with a shrug.

Cifka began with a Ghost Quarter and a Chromatic Star, while Lee suspended a Search for Tomorrow with a Breeding Pool. Cifka shaped his game plan with a Sleight of Hand, and a Conjurer's Bauble, while Lee dropped to 15 to play an untapped Steam Vents. Cifka merely played a Misty Rainforest on his turn, and passed it back to Lee. 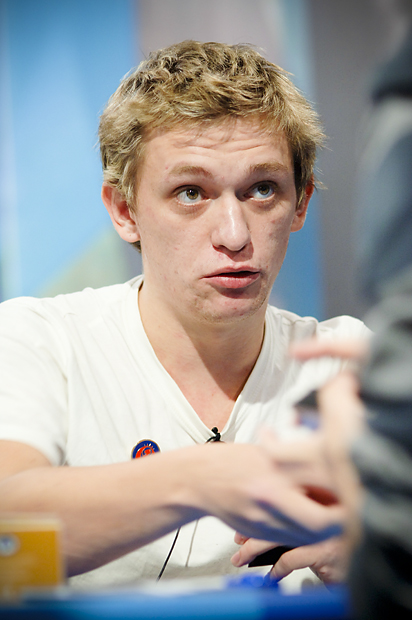 Cifka crunches the numbers so he can make the most out of every draw.

Lee's Search for Tomorrow resolved, and he played a fourth land.

At the end of Cifka's turn, Lee tried for a Vendilion Clique, so Cifka cashed in a Conjurer's Bauble, a Chromatic Star, and a Misty Rainforest, before bringing them back with a Second Sunrise. The Clique finally resolved, and Lee wasted no time getting rid of a Reshape, leaving a Pithing Needle, an Elsewhere Flask, a Chromatic Sphere, a Silence, and a Ghost Quarter.

Lee attacked Cifka down to 13 and cast a Serum Visions. Cifka cast his Flask, a Conjurer's Bauble, and the Sphere. At the end of Cifka's turn, Lee chose to draw and discard a couple of cards with Izzet Charm, and then also summoned a Snapcaster Mage.

Lee untapped and attacked Cifka down to 10. He played a sixth land and passed back the turn.

Cifka again began the proceedings by asking for Silence. Lee responded with a Cryptic Command, countering the spell and drawing a card. Cifka then Bauble'd his earlier Sunrise onto the bottom of his library, before Ghost Quartering his now tapped Plains for an Island. Next up was another Quartering, then he cashed in the Sphere, then the Bauble, and then the Star, giving him two white mana in pool and three untapped Islands. He sacrificed his Flask and cast a Second Sunrise, with two Islands untapped, to play around Izzet Charm.

He Quartered again, leaving only one Island left in his library, then Bauble'd the Second Sunrise to the bottom, before the Flask gave him his new card. Cifka then paid 2 life to Gitaxian Probe Lee, revealing an Ancient Grudge, a Nature's Claim, and a land.

With the coast now clear, Cifka continued to cycle through his trinkets until he could play another Sunrise. Without a Lotus Bloom in the mix yet, things were not yet inevitable for Cifka. After another couple of Sunrises (and it certainly felt like a couple of days), he found the Reshape, and heaved a sigh of relief. With his engine joined by a Lotus Bloom and now at full capacity, he began to power through his cycles until Lee gave up waiting, and conceded the match. 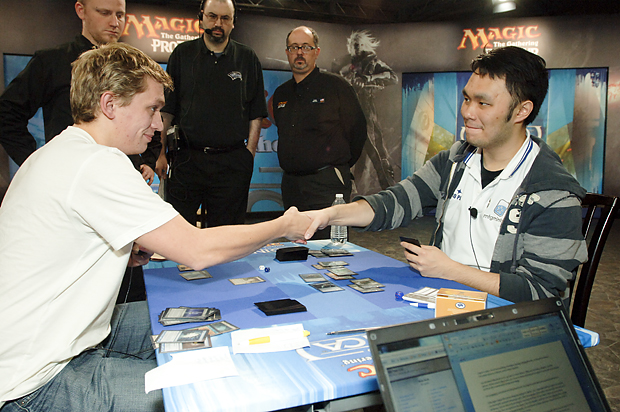