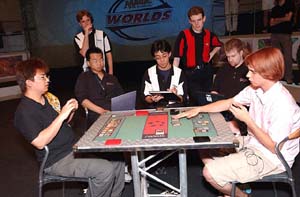 Today, Nieminen is looking to accomplish something that has only been done once, by Jon Finkel in 2000- winning the team event and the individual competition at Worlds. This would put him up $45,000, which isn't bad for a week of playing Magic. In his way, however, is "The Last Emperor", Jin Okamoto. Okamoto has long been considered one of Japan's top players, and after two near misses on tiebreakers, he finally made the Top 8 of a Pro Tour event this weekend.

It's certainly an appropriate time for Okamoto to make his debut on the Sunday stage, as Japan had a tremendous breakout year. He represents the fourth player from the country to make a Top 8 on the tour this season, but he's looking to do one better, and win it all. Tsuyoshi Fujita made the finals of Pro Tour Tokyo, and Masashi Ooiso also came one match short of a championship trophy in Yokohama. Japan certainly wants to finally have a champion, and if Jin Okamoto has his way, he'll do his country one better and come home a world champion.

Nieminen had a second turn Compulsion, and Mana Leaked Okamoto's Deep Analysis. He then untapped, and his Concentrate was uncontested. Okamoto flashed back the Analysis and cycled Renewed Faith, but missed a land drop regardless. On the following turn, Okamoto tapped four for another Analysis, and once again Nieminen had Mana Leak, preventing Jin from drawing cards and making land drops. With Okamoto tapped out, Nieminen put Mirari's Wake into play. He seemed to have full control of the game, with Wake and Compulsion going and plenty of mana to fuel them. However, when Nieminen tapped out while activating Compulsion, Okamoto used Cunning Wish to get Ray of Revelation and wipe out the enchantments, putting the game back at a level playing field.

Nieminen shook his head, and seemed to be angry at himself with this turn of events. Okamoto now turned the game in his favor, getting a Mirari to resolve. Nieminen decided it didn't merit a Circular Logic, but the Compulsion that followed certainly did. With the Mirari in play, Okamoto started to put Cunning Wish to work, playing it and copying it to get another Wish and Ray of Revelation. This play left Okamoto with only two lands untapped, so Nieminen played his own Wish, getting Read the Runes. He cast it right away for four, improving card quality a bit.

Okamoto played a Compulsion, taking further control of the game. When he cast and copied Cunning Wish again, Nieminen knew he had to go for it. He cycled Decree of Justice, making five Soldiers. The effect resolved, and Okamoto got a free Circular Logic with his Wish. He untapped and played Mirari's Wake, and now had the deck's three key permanents in play. Nieminen still had six Soldiers, and played Cunning Wish on his turn. Okamoto targeted the Wish with Circular Logic, and copied it. Nieminen Mana Leaked one copy, and had enough mana to pay for the other.

It didn't matter, as Okamoto had a Mana Leak of his own, and the Wish was countered. The Soldiers attacked for six, but from this point, it wouldn't be hard for Okamoto to win. He copied Deep Analysis, played a second Wake, and ended his turn. Nieminen played his own Wake, followed by Compulsion, but Okamoto still had the Ray he Wished for earlier, and copied it to destroy both right away. Nieminen used Circular Logic to counter the one targeting the Wake, but conceded soon after, as the Ray would simply be flashed back, and he was out of resources.

Nieminen wished to "send greetings to Olkku and 'PV'"

Nieminen mulliganed down to six, and both players opened with a Verge. When Nieminen activated his, Okamoto cast Cunning Wish to get a Ray. Unfortunately for Nieminen, he was lacking a fifth land (or a second blue source), and had to cycle Decree of Justice for one, looking to not miss a land drop. One didn't arrive, although Flooded Strand showed up a turn later to put Nieminen back in the game. Okamoto tapped out to sacrifice his Verge, and Nieminen used the opportunity to cast his own Wish, getting a Ray to put things at about even. The one Soldier Nieminen made was attacking for one point of damage a turn, and when he tried to cast Concentrate. 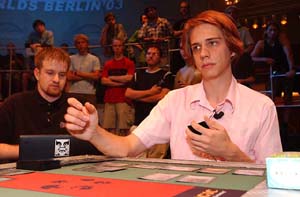 Okamoto had Mana Leak. Nieminen was on five lands, and Okamoto hadn't missed a drop. He was able to get Compulsion down without a problem, and even though Nieminen had Ray of Revelation, Okamoto was able to get a few activations out of the enchantment before it was destroyed, and then sacrificed it to gain another card. Deep Analysis put him a little further ahead, and Nieminen drew a Verge to put the lands at about even on each side.

Okamoto cycled a Decree on end step, getting six Soldiers. Nieminen played Compulsion, and Okamoto targeted it with his Ray. It was sacrificed in response, and Nieminen still didn't have an answer to Okamoto's Soldiers. Another Decree was cycled to bring Okamoto's number of 1/1's up to ten, and with Nieminen's blue mana all tapped, two Wakes came out to make them 3/3. They all attacked, and Nieminen flashed back a Ray to destroy one Wake. Another one from the hand drew two countermagic spells from Okamoto, which protected the Wake, left his Soldiers at 2/2, and forced through lethal damage.

This time, it was Okamoto who mulliganed his opening hand. He played a Verge, and Nieminen had Star Compass. This was followed by Compulsion, and Okamoto sacrificed the Verge, and had a second. A few turns later, Nieminen cycled Decree of Justice for just two. He followed up with a face-down Exalted Angel, which resulted in a counterwar that was won by Nieminen. This left him tapped out, so Okamoto destroyed Compulsion with Ray of Distortion, and played his own. Okamoto was left tapped out in turn, so Nieminen attacked with the morph and the tokens, then cast Concentrate.

He continued to attack for just four, not wanting to tap mana and leave himself vulnerable. Ray of Revelation took out Compulsion after a few activations, and the Angel flipped over on end step. The attack that followed brought Okamoto down to four life, and he played Flash of Insight on end step for five, looking for an answer. This left enough mana to flash it back, and Okamoto was able to look at three more cards. He untapped, played Wrath of God, but lost the resulting counterwar.

Okamoto played first, and got Compulsion into play on turn two. Nieminen summoned a face-down Angel, and after one attack for two, it flipped over to become a huge threat. This left Nieminen tapped out, so Okamoto cast Decree of Justice, getting two 4/4 fliers. Nieminen cast Concentrate, and attacked with the Angel. Two 4/4s ganged up on it, sending the Exalted one to the graveyard, and leaving Okamoto with one 4/4. Nieminen played another Angel face down, and ended his turn. Okamoto attacked with his flier, and Nieminen swung back with his Angel, unmorphing it.

Thanks to Compulsion, Okamoto's cards kept getting better, but he'd need to find an answer to the Angel fast. Mirari's Wake looked to do the trick, since it would make the 4/4 big enough to block Exalted Angel and survive, not to mention the Mana Flare effect. The resulting counterwar was won by Okamoto, and he now had Compulsion and Wake, with plenty of lands to abuse them. Getting them into play and fending off countermagic left him with only one plains untapped, so Nieminen had a tremendous window of opportunity. He played his own Wake, followed by Concentrate. 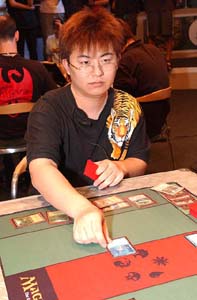 Exalted Angel attacked for five, bringing Okamoto down to three. A cycled Decree of Justice would have been more bad news, but Okamoto had Stifle. He then cast Cunning Wish to get Ray of Revelation, and destroyed Nieminen's Wake. Nieminen played his own Cunning Wish, and the resulting counterwar was won by Okamoto. Nieminen wasn't out of the game though, and started gaining more ground with card drawing spells. He flashed back Deep Analysis, and played a face down Angel. On end step, Okamoto cycled a Decree, making fifteen 2/2 creatures. Nieminen cast Hunting Pack to get three Beasts, which put Okamoto into a tough spot.

He was at two life while Nieminen was at 28, and had enough blockers to survive an attack. Additionally, Nieminen had a second Exalted Angel ready to unmorph, while Okamoto only had one flier to block with. This represented lethal damage, so Okamoto needed Mirari's Wake to make his Soldiers 3/3- big enough to squeeze through enough to win. He cast card drawing spells and used Compulsion to try to find it, but it didn't show up. Instead, he attacked with all his creatures, bringing Nieminen down to eight after Exalted Angel triggered. Wrath of God followed, and while Okamoto would survive the next turn, he only had two mana available, leaving Nieminen free rein on his turn.

Nieminen first drew cards with Deep Analysis, then used Cunning Wish to get a Ray, taking out Okamoto's Wake and Compulsion. More copies of Analysis and flashed back ones put Nieminen up cards, and at one life. Okamoto cycled Decree of Justice on end step, and Nieminen conceded.