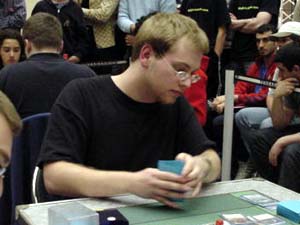 semifinals feature the same matchup : Goblins vs Affinity. Tobias is piloting the Ravager deck while Vasilis is with Goblins, both decks powered up by Skullclamp. You probably know by now that Vasilis is from Greece, where he won a trial getting his flight paid in the process while Tobias is from Germany, and is part of team mir.

The german won the die roll and kept his opening seven unlike his opponent who has to paris once but is fine with his next six.

Tobias opens with a Worker while Vasilis only has a turn one Nexus. On his second turn, Tobias gets a Skullclamp out along with a Mox imprinting Atog and draws two cards from a Thoughtcast as well as from clamping the 1/1. Vasilis again has no play as he just lays down a mountain and says go. It seems like Tobias is easily going to win this one as he gets a Ravager, a Frogmite and a Welding jar out vs Vasilis lone Sharpshooter. Indeed, Tobias just drops two Disciples and sacs all his artifacts after attacking for a few points of damage.

Both players sideboard prettty quickly as they are used to the matchup by now. 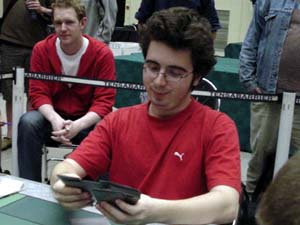 It's Tobias turn to paris this time and Vasilis kicks off with a Sledder on turn one followed by a Nexus on his second turn but no play. Tobias doesn't have a very good start either as he only has a Frogmite out by turn two. Vasilis plays a Sparksmith on turn three but no third land, and Tobias plays a Ravager along with a Bolt on the annoying goblin. Vasilis draws a mountain and is able to cast a Warchief but keeps his guys at bay while Tobias takes his turn to draw three from a Thirst for Knowldege, sending his Ravager in for one but not droping a fourth land. Vasilis gets rid of both creatures with a Bolt and a cycled Gempalm and things look good for him again. Tobias just repeats his last turn, playing a Glimmervoid and trying to Bolt the Warchief saved by the sacrifice of his little buddy but all Vasilis can do with four lands is equip his Warchief and send it in along with a Nexus unless he's playing around Pyroclasm. Again, Tobias plays a thirst, drawing no lands and playing a Skullclamp as Vasilis is able to attack him down to eight. Tobias then gets rid of the Skullclamp and lays down an Atog. Vasilis is ready for this though and trades it for his Warchief and a Bolt. His next two goblins get killed by a Pyroclasm and Tobias casts a Ravager with only five lands out as other permanents. The Greek then summons a Warchief and a Clamp but no mana to equip it and Tobias drops two Disciples before sending his Ravager into the red zone which is lethal if one of Tobias two cards in hand is a Shrapnel Blast. Vasilis thinks for a while but let's it through cause he can't really win if he starts chump-blocking. Tobias sure has the red spell and ends the game after checking the math again.

Tobias wins 2-0 and will play in the finals against Kai Budde or a fifteen year old kid from Netherlands.