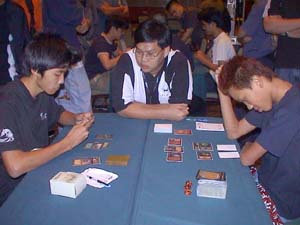 Street Fighter savvy readers may wish to partake of a comparison spectators made during this match. Akuma is, of course, Akuma, but Thailand's Veerapat Sirilertvorakul was quickly christened "Sagat". Unfortunately for him, it looked like he'd earn that giant scar in his match against Leong. Leong's red-black beatdown seemed tailor-made to beat Sirilertvorakul's black-blue-white control.

Leong had a blitzkrieg start: Spark Mage, Barbarian Outcast, and when Sirilertvorakul's Mesmeric Fiend stole Frightcrawler, Leong topdecked Firebolt to free it and cast it. Sirilertvorakul's only rejoinder to this brutality was a Last Rites that stripped Leong of Zombify and Thermal Blast. No biggie.

But as Leong drew more lands, things started to turn around. First Sirilertvorakul Butchered the Outcast. Then he made Braids. Leong had to sacrifice his Mage so he'd have enough land to Firebolt the Legend. Sirilertvorakul kept rolling. Putrid Imp hit play as a 2/2 as Chainer's Edict took out the Frightcrawler. His Carrion Rats died a merciful death to Afflict.

Balthor the Stout hit play, and spectator Ben Seck could not resist making a beer pun. He was quickly booed into silence. This just as Leong ripped Sonic Seizure to free his Outcast. Sirilertvorakul had no play, and was smashed for eight. When he failed to draw the seventh land for Chainer's Edict, he scooped.

Game 2 was even more savagery. Leong topdecked swamp for his Barbarian Outcast, then had Chainflinger to excise Cephalid Looter. Chainer's Edict removed the Outcast, but Leong just piled on Frightcrawler. Pilgrim of Virtue was no defence. Worse yet, Sirilertvorakul had no answer for Bomb Squad.

He made a Whispering Shade, then flashed the Edict back, but his Shade soon exploded. Things were looking grim indeed. A topdecked Butcher got rid of the Squad, and Sirilertvorakul breathed a sigh of relief. Still, he was at 8. He hired Auramancer and Psionic Gift. Leong brought out a wall of his own, including Pardic Firecat and Balthor the Stout. Soon he found Soul Scourge, and Sirilertvorakul was low enough that he didn't even have to serve to win it.