can only go so long here in Hawaii without running into a Kird Ape.

Tiago Chan and his Owling Mine deck has managed avoiding the furry 2/3 for seventeen straight matches, but his luck has finally run out. Sitting across the table from him here in the Pro Tour semifinals is Mark Herberholz and his Gruul beatdown machine. Most people that have followed this emerging metagame know that the Owl deck cannot beat Kird Ape decks, but Chan is willing to try; he has several sideboard slots dedicated against small creatures. 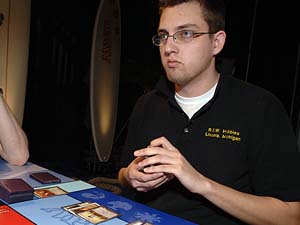 Herberholz's story is an interesting one. Although he lived at the "Magic Beach House" for a while, he never bought into the theory that the group had "broken Standard" with their BWg control deck. Instead, Herberholz focused on tuning his red-green deck to beat a control-heavy metagame, swapping in Giant Solifuges for Rumbling Slums and Flames of the Blood Hand for Volcanic Hammer. His refusal to conform has paid off, as he is the only member of that group to be playing today.

In Game 1, Herberholz mulliganed to five cards but came out amazingly quickly with a Kird Ape and back-to-back 3/3 Scab-Clan Maulers. Chan missed his second land drop and couldn't stay in the game long. Onto Game 2.

Chan sided out all of his Howling Mines, Ebony Owl Netsukes, Evacuations, and two of his Sudden Impacts for Mana Leaks, Melokus, Threads of Disloyalty, and Pyroclasms. These changes make him immune to Herberholz's artifact destruction, but take him off his main plan and almost force him to win through creature damage.

Herberholz had none of his eleven one-drops to start Game 2, and Chan kept him out of the Red Zone for the first several turns of the game with a combination of Remand, Mana Leak, and Eye of Nowhere.

The presence of Skarrg, the Rage Pits finally let Herberholz get a Kird Ape past a Kami of the Crescent Moon on turn six, which then enabled the bloodthirst on two Scab-Clan Maulers. Chan tapped out for Meloku, but it was Charred and then the burn started flying at Chan's head. 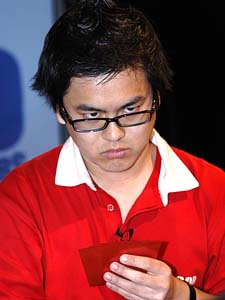 Herberholz had a good curve to start Game 3 with Frenzied Goblin and Dryad Sophisticate. Chan stalled reasonably well by bouncing a land and then playing the 1/3 Kami.

Herberholz lost the Goblin in combat, but that enabled a 3/3 Scab-Clan Mauler… which was quickly snapped up with Threads. After Chan played a nonbasic land, Herberholz committed two more Dryads to the table, and Chan swept all three away with a Pyroclasm.

Another 'Clasm took out all of Herberholz's next wave plus the blue Kami after it tussled with a Kird Ape. Herberholz fell to five in the attack, and an Exhaustion sealed the deal.

Somehow Chan managed to win a game against Zoo!

Going first weighed hugely in Herberholz's favor in Game 4. Frenzied Goblin enabled a 3/3 Mauler on turn 2. The 3/3 was Boomeranged but replaced by a 3/4 Burning-Tree Shaman. Mauler #2 was stolen by Threads, but Herberholz had more gas in the form of Shaman #2 and Kird Ape.

Kami of the Crescent Moon came down, which doesn't bode well when the Owl player is backpedaling so much. More 3/4 Shamans came down for Herberholz, and Chan's only out was two Pyroclasms in the same turn.

He never found Pyroclasm #2, and that was the match.