evotion, and Mono-Blue Devotion in particular, is the biggest story of the weekend. The deck didn't show up in overwhelming numbers on Day One, but the percentage of the field running Thassa, God of the Sea and Co. increased steadily as the tournament progressed. The deck had a good Day One conversion rate, then took three spots in the Top 8, and now, in the Top 4, constituted a whopping 75% of the remaining decks. Whether the finals would see a full 100% was to be determined in the other semifinal between Jeremy Dezani and Makihito Mihara. Here, it was mono-blue all the way.

Piloting the two very similar but not identical decks were Sam Black and Pierre Dagen. Black, a member of Team StarCityGames, was already a well-accomplished pro and deck builder before this event, whereas it was Dagen's first time in the Pro Tour spotlight, after a Grand Prix Top 8 last year. The other big story of the event clearly was the rise of a new crop of French players, with Dagen and Dezani both making their first Pro Tour Top 8. 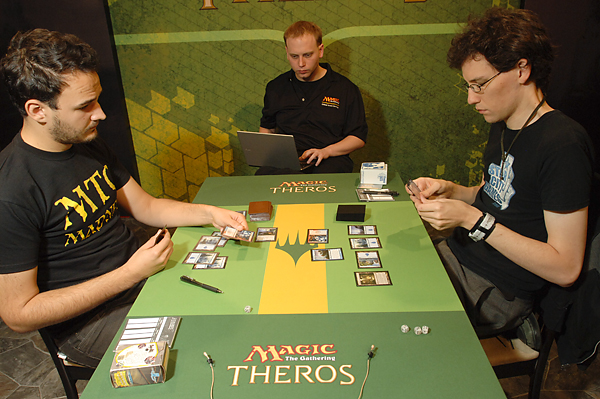 Sam Black and Pierre Dagen match God for God and merfolk for merfolk in the Mono-Blue Devotion match-up.

Black and Dagen were discussing the differences between the two similar decks while shuffling their decks. "I like my sideboard more than yours," Black stated. "You expected many people to play mono-blue?" asked Dagen.

"We figured other people would know about it, yes," said Black, as evidenced by the three Gainsays in SCG's sideboard. "You?"

"We actually hoped we were the only ones," Dagen admitted, giving a little laugh and shaking his head. It really didn't work out that way at all.

Thanks to his higher finish in the Swiss portion, Black had the advantage of playing first, but Dagen had the early advantage with a pair of Judge's Familiars and a Nightveil Specter. Pressured by fliers, Black started on Omenspeaker, Thassa, God of the Sea, and Bident of Thassa. Dagen had no fourth land but, via Nightveil Specter, did find yet another flier in Cloudfin Raptor on top of Black's deck. On his turn, Black cast his own Nightveil Specter and a Tidebinder Mage, increasing his devotion to blue well beyond the necessary five, allowing Thassa to enter the race. Black's chances took a turn for the worse, however, when Dagen drew his fourth land and summoned Master of Waves. Dagen had just added a total of 18 power to his side of the board (counting counters on Cloudfin Raptor) and Black didn't have an answer. The first victory went to Dagen.

In the second game, Black had the initial advantage with Cloudfin Raptor, Frostburn Weird, and Tidebinder Mage to Dagen's Nightveil Specter. An active Specter is amazing in the mirror match but, unfazed, Black continued the beatdown, and had Gainsay to keep the initiative. That is, until Master of Waves showed up on Dagen's side. Black summoned his own Master, but Dagen had a second. Apparently this match-up was all about the Masters.

Ahead in life, Black was able to force a trade between his 2/1 tokens and some of Dagen's 3/2 tokens, but now the presence of Nightveil Specter made itself felt. While Black was thoroughly out of gas, Dagen continued to cast spell after spell: Tidebinder Mage tapping down Black's Frostburn Weird, Jace, Architect of Thought, Thassa, God of the Sea, with the latter two coming from Black's deck originally, abandoning Black's sinking ship with the help of Nightveil Specter. This game had been all but over for some time, when Dagen finally delivered lethal damage via Thassa's activated ability, granting unblockability and swinging for the win. 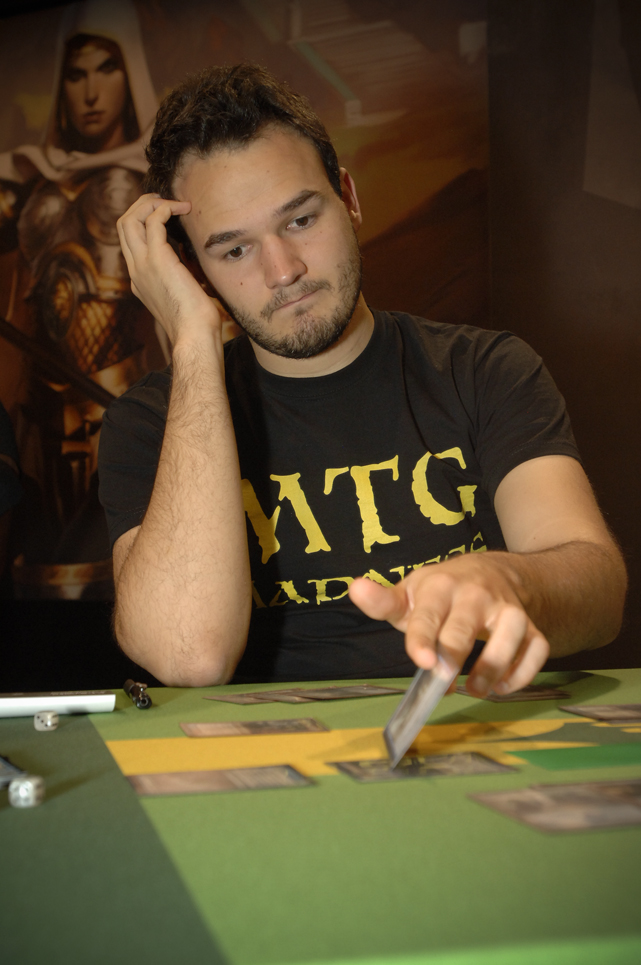 Frenchman Dagen presses an early advantage with a 2-0 lead over his opponent.

After Dagen's 2-0 start into the match, every game after could be the last for Black. "I haven't tested this match-up," Black admitted. "Last night I only tested for my quarterfinal match. Basically, my only experience comes from playing the match-up in the actual tournament."

"But you probably played it a lot of times, didn't you?" asked Dagen. In fact, both players had faced the mirror four times throughout the weekend so far, another testament to the strength of Mono-Blue Devotion.

The third game, once again, came down to Master of Waves. After the intial early drops, Black landed one, creating five tokens, which in turn were dealt with by Dagen's Ratchet Bomb. Black's second Master, however, brought six 3/2 tokens. Dagen bought some time with Jace, Architect of Thought. Still, Dagen was under terrible pressure. An attack put him at 8, and the next would surely kill him...so it was just in time that he found his seventh land to overload the Cyclonic Rift his Nightveil Specter had earlier stolen from Black. He cleared Black's board and swung in with all, putting Black at 11, down from 16.

While Black recast Tidebinder Mage and Nightveil Specter, Dagen, previously tapped out for Cyclonic Rift, now had all his mana back online. He added more pressure in the form of two additional Frostburn Weirds, activating both of his Mutavaults. The resulting attack got Black to 5. But after another Tidebinder Mage, Black's Nykthos, Shrine to Nyx tapped for a net gain of five mana, meaning he was able to cast Jace, Architect of Thought as well as Master of Waves, creating ten elementals. 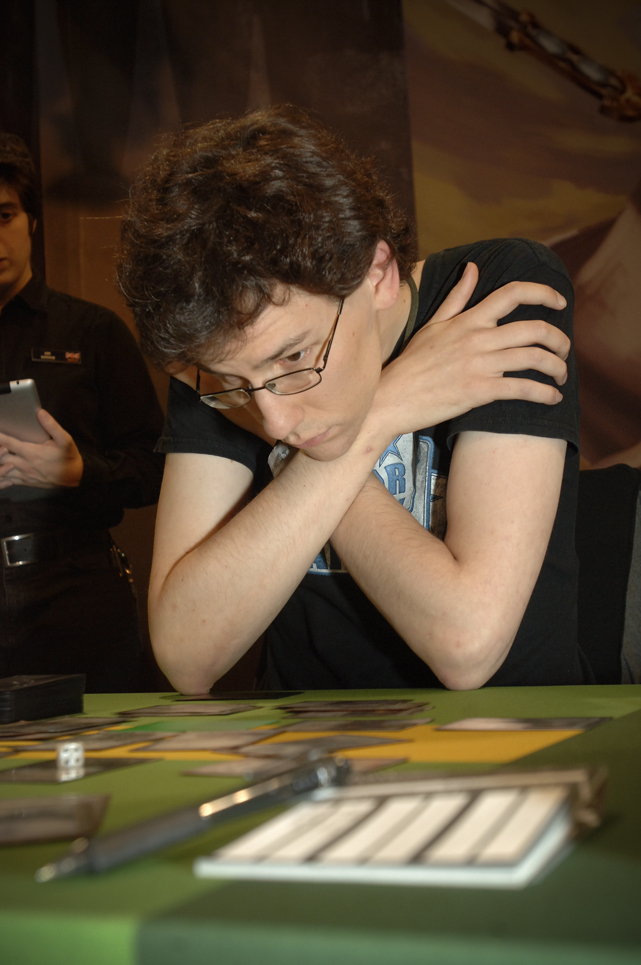 Black works towards a comeback, his tournament life on the line.

Dagen had Thassa, God of the Sea, but thanks to Jace's first ability couldn't force through enough damage, even with Thassa's unblockable effect. What he really needed was an answer to Master of Waves which, otherwise, was going to kill him on the spot. He didn't have one, and the top of Black deck didn't have one either when an unblockable Nightveil Specter went to check. Dagen nodded and picked up his cards.

"I got one!" said a happy Black after his first win of the match, but Dagen was quick to point out that it was a close game.

The fourth game began as a stand-off between various creatures, some on the ground but most notably one Nightveil Specter on either side. Dagen tried to push through some damage (or his Nightveil Specter) when he attacked with two Mutavaults, the aforementioned Specter, and Frostburn Weird. It was an interesting play, and Black's choice to give Dagen an extra card off Nightveil Specter was interesting too, but in the end neither of it mattered. Instead the game was decided by Nightveil Specter advantage. Black drew a second, which found a third. Dagen just couldn't compete with such an amount of extra cards. Black's Gainsay prevented Dagen from ever getting back in the game.

In true mirror-match fashion for the fifth and final game, both players opened on Cloudfin Raptor and Frostburn Weird. The action only got going for real, though, when Master of Waves made an appearance on Dagen's side. He lost it to Black's Rapid Hybridization and the turn afterwards lost another Master of Waves to another Rapid Hybridization. With two Master on Dagen's side gone, it was time for Black to master the waves. Meanwhile, Dagen's Cloudfin Raptor had grown to 3/4 and Black was getting dangerously low on life. Another flier, Nightveil Specter, on Dagen's side was at least worth some concern. Additionally, Dagen had the perfect answer for the Master of Waves tokens in Ratchet Bomb. Black was facing lethal damage in two attacks.

His overloaded Cyclonic Rift changed that, turning around the game completely. Suddenly Black who had been on the back-foot all game was on the offensive. With the help of Jace, Architect of Thought he even found some fliers, so Dagen, who quickly recast most of his creatures, would not be able to get in any more damage through the air. What Dagen desperately needed, though, was Thassa, God of the Sea...

...and that's exactly what he cast on his turn.

Now it was Black who was in dire straits. He cycled through two Jaces looking for an answer to the opposing Thassa. There was none. Thassa, God of the Sea granted unblockable status to itself and dealt the final points of the game and the match.

Dagen defeats Black 3-2 and advances to the Finals!